The age of space travel began in 1957 with the Sputnik satellite . At the same time it is also an expression of the systemic competition between the USA and the Soviet Union, which is also reflected in the Eisenhower Doctrine .

Meanwhile, the Treaty of Rome lays the most important cornerstone of European unification.

In response to the Suez Crisis the previous year, US President Dwight D. Eisenhower announced the Eisenhower Doctrine in a speech to Congress on January 5 , according to which the US will defend all countries in the Middle East with all possible means if they do should succumb to aggression from international communism.

The confrontation between the superpowers became even more explosive this year when the Soviet Union announced the launch of its first ICBM on August 26 and, weeks later, on October 5, put the first artificial Earth satellite, called Sputnik , into orbit. It is therefore clear that in the future the Soviet troops will be able to transport nuclear warheads to any point on earth. This fact and the feeling of inferiority trigger the Sputnik shock , especially in the USA and the rest of the western world .

On March 25, 1957, the European Economic Community was founded with the signing of the Treaty of Rome by Belgium , France , Italy , Luxembourg , the Netherlands and the Federal Republic of Germany to promote the common economic policy within the framework of European integration.

In Algeria , the French army was able to achieve enormous successes against the insurgent FLN in the Battle of Algiers . The confrontation became the turning point of the war in Algeria , which had been waged since 1954 : the brutal actions of the Foreign Legion and the paratroopers and the systematic violations of human rights such as mass arrests, torture and enforced disappearances not only shocked the French public, but led to global sympathy with the Algerian nationalists who to be seen as champions for liberation from colonialism and imperialism .

In the US, it comes in September, three years after the official abolition of racial segregation by the Supreme Court of the United States , in the southern states to a serious confrontation, as the governor of the state of Arkansas , Orval Faubus , nine black students from entering Central High School in the capital Little Rock by means of the National Guard . President Eisenhower restores federal authority by removing the authority of the Arkansas governor over all police and army units and sending soldiers from the 101st Airborne Division to enable black students to attend school. 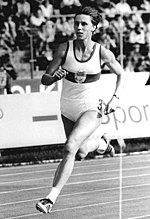