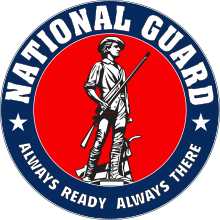 The members of the National Guard are voluntary service payable militiamen . Each state , most territories (e.g. Puerto Rico ) and the District of Columbia maintain their own national guard , which is subordinate to the respective chairman of the executive branch , usually the governor . Since 1903, this has been closely linked to the army and air forces under federal law and institutionally , so that under certain circumstances the federal level can fall back on it with the consent of Congress . Separate from this are the state guards , the so-called state defense forces , which are solely committed to their federal state.

The National Guard is organized in units assigned to the 50 states and the overseas territories. The respective governor is the commander-in-chief of the respective units , and the President of the United States for operations at the federal level . In the case of the District of Columbia National Guard , in which the District of Columbia is not a state but a federal district , the President of the United States is the sole commander in chief.

The National Guard originally emerged from the militias of the War of Independence . The regular army was weak throughout the 19th century. This regulation was intended to prevent the individual states from being pressured by the US federal executive branch or Congress through the use of force.

In the Mexican-American War , at the beginning of the American Civil War, and in the Spanish-American War , the militias made up the largest proportion of all American soldiers.

They have been called the National Guard since they were founded by Congress on January 21, 1903 and have been used in every major conflict. During the First World War , two-fifths of the troops fighting in France were national guards; 190,000 of them were deployed in World War II and 140,000 in the Korean War .

After segregation was abolished, the Arkansas National Guard was used to maintain segregation. The so-called Little Rock Nine were the first black students to attend Little Rock Central High School in Little Rock, Arkansas , three years after the official desegregation in American schools in 1957 . The then governor of the state, Orval Faubus (Democrat), had the Arkansas National Guard deployed under him on the evening before the first day of school on September 2, 1957, in order to deny the approximately sixteen-year-old students entry into the building. In addition, angry whites demonstrated in front of the school building. The governor had to withdraw the National Guard from school on September 20th due to a court decision. To enforce federal law, President Eisenhower placed the 10,000-strong Arkansas National Guard under federal command on September 24, 1957. At the request of the Little Rock Mayor, he sent federal troops (1,200 soldiers from the 101st Airborne Division ) to the city to break up the gatherings of white demonstrators around the school. The federal soldiers protected the black students on the way to school and in the building right up to the classroom doors.

National Guards assist the security forces during the 1968 Democratic National Convention in Chicago .

During the Vietnam War , Presidents Johnson and Nixon refused to send the National Guard into battle. Johnson wanted as long as possible to keep the appearance that the (already unpopular) Vietnam War was not a real war , and the mobilization of the National Guard would have destroyed that appearance. As a result, Vietnam veterans occasionally make accusations against national guardsmen. They only volunteered to avoid being drafted and thus deployed in Vietnam. A prominent target of such allegations was George W. Bush , who served in the Air National Guard .

During a demonstration in front of Kent State University after the outbreak of the Vietnam War , the Ohio National Guard shot dead four students on May 4, 1970 and injured nine others, some seriously. The act went down in history as the Kent State massacre and sparked international protests.

Since January 2005, units of the National Guard can be deployed overseas for up to 24 months. Under former President Bill Clinton , the time span was six months; George W. Bush extended it for a second term of office for 18 months shortly after he was sworn in.

In Operation Jump Start , the Army National Guard has been entrusted with the temporary guarding of the border with Mexico since May 2006 until the extension of the border fence and the increase in the United States Border Patrol have been completed.

After several weeks of basic training, further training courses and several years of service must be completed. In peacetime it is usually “two days a month, two weeks a year”. This was an official slogan of the recruitment offices until the Iraq war . National Guardsmen received among other 200 dollars pay per month. Many states also pay young members the cost of college education. Ever since National Guard units came into use in Iraq, recruitment agencies have often struggled to find people for the job. Since during the Iraq war more than 50 percent of the guardsmen were sent to Iraq at times, there was a lack of crews and fire-fighting helicopters in large forest fires at home, most of which are fought by the National Guard.

The equipment of the US National Guard is essentially the same as that of the regular armed forces of the United States, but National Guard units do not always have the most modern equipment.

For air fleet of the Air National Guard (ANG) 1,300 machines include all types of aircraft US Air Force , except for the stealth aircraft B-2 and the MH-53 Pave Low helicopter, the B-1 - Bombers and the AC-130 Gunship .

The governor of each state deploys his state's National Guard in the event of natural disasters and similar events. The equipment of the National Guard therefore includes: a. Lockheed C-130 with MAFFS (Modular Airborne Fire-Fighting System) can also be converted into fire-fighting aircraft .

Distribution to states and territories

Data collected from the Defense Manpower Data Center (as of 2017)

Divisions of the Reserve of the United States Armed Forces