The title of this article is ambiguous. Further meanings are listed under Marine (disambiguation) . 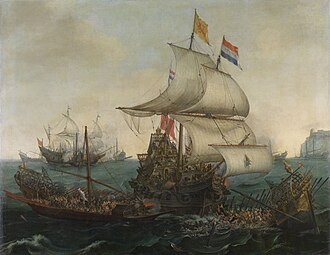 A warship sailing under the state flag. At the stern the "blood flag" for the joint attack on the enemy, in the large top the flag of the Staten Generaal and here also the license plate of the admiral ship. In front and besan the general flag of the United Provinces of the Netherlands.

The term Marine refers to the totality of the lake propelled fleet of state . This consists of his merchant navy and his naval forces. The term marine is derived from the Latin word marinus , belonging to the sea .

Originally, the navy was only the land army embarked for overseas war missions . The increasing sea ​​trade made it necessary to protect merchant ships first by armed crews, later also by warships ( convoy ships ). In addition, some states had permanent navies as early as ancient times in order to be able to exercise their power both at sea and in foreign countries. The first organized navies were to be found among the Carthaginians , Greeks and Romans .

The naval forces of a state are also commonly referred to as the fleet . They consist of the actual fleet , the associated supporting units and facilities on land as well as their organization and administration.

The navy may be armed with warships , auxiliary ships and other associated units such as naval aviators , marine infantry , support and training facilities.

Within military navies, a distinction is usually made between one or more fleets and the supporting elements such as bases, schools, etc. The forces on water, on land and in the air are subordinate to the fleet command. Large navies have several fleets, such as the US Navy with its 2nd, 3rd, 4th, 5th, 6th and 7th Fleet or the Russian Navy with the Pacific, Black Sea, Northern Sea and the Baltic Fleet as well as the Caspian Flotilla .

According to a list by The National Interest from 2014, the US Navy is the most powerful navy in the world, followed by the naval forces of the People's Republic of China , Russia, the United Kingdom and Japan .

The control of the sea is the main task of Marines in the war. Strong naval forces are supposed to ensure that their country can use the sea ​​routes as transport routes for goods and military forces. Inferior naval forces usually concentrate on denying the enemy this use, even if you cannot use the sea yourself for your own purposes. Typical of this type of conflict at sea were the two world wars , in which the superior allies at sea needed the North Atlantic as a supply route, while the defeated Germans wanted to prevent this use with their submarines and auxiliary cruisers without ever having the chance to to conduct own sea transports across the Atlantic. In this respect, sea wars are often wars of wear and tear ; the sea ​​battle is the exception, even if it has shaped the image of sea ​​war in the general consciousness.

Marines develop naval power as a military effect not only in war, but already in peace and in crises or regional conflicts. Protecting sea routes and maritime trade against piracy is an ongoing task for most navies, even in peace. This also includes the elimination of dangers in the waters such as sea ​​mines . Many navies also have national police functions , for example in monitoring and enforcing marine environmental protection . In crises and regional conflicts, naval forces, unlike land forces, can be moved on the high seas without obstacles under international law . Their presence in a region underlines the power of the respective nation.

In Germany, the term marine means that part of the Bundeswehr that specializes in military tasks on and off the sea , as opposed to the army and the air force .

The ranks in the navy usually have different designations than those of the army or the air force. The military names are partly based on those of the merchant navy . 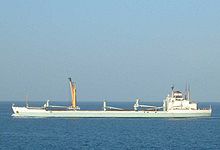