A sea ​​power is understood to mean a state that has both a naval force capable of acting as well as strategic positions at its disposal.

This led to rival interests in trade and power politics, which were also fought out through piracy . Already in the 14th century BC There was piracy of individuals and states who waged a kind of naval war for personal and / or state enrichment. To defend against these threats and to enforce trade and power-political interests, warships were developed and further developed. The protection of their own merchant fleets has always been in the interests of the sea-trading states; especially when this trade was a key element of the state's existence. The task of protecting its own merchant fleets and asserting state interests led to the construction of war fleets and ultimately to the formation of sea powers.

The importance of naval power was understood in ancient times . So we know from Greek traditions that around 2000 BC Maritime rule of Crete based on its fleet (see History of Crete ). Greek sources describe Crete as a thalassocracy that was existentially dependent on trade by sea.

The definition of sea power as part of today's marine strategic concept system goes back to the foundations laid in 1890 by Alfred Thayer Mahan in his book “ The Influence of Sea Power on History ”.

Maritime power is a state that has a balanced fleet and maritime strategic positions. Sea power is a product of the fleet and strategic maritime position. If a factor is zero in this calculation , then the product of sea power is also zero. Sea power is the prerequisite for any projection of power over the sea. The ranking of the naval powers among themselves is determined by the quality, quantity and readiness of the naval forces. The strongest sea powers can also be world powers .

Maritime strategic positions are land-based supply facilities in the operational area, which must have an efficient and safe connection to their own territory. They must be secured against enemy air and land operations at the same time. Without these positions, a struggle for supremacy is not possible.

Sea powers can fight for naval supremacy on seas in war. In peacetime, sea powers with a sufficient maritime component (naval warfare equipment) that operate from maritime positions (bases) can exercise political influence. Naval forces are used, for example, off the coasts of a state as an expression of political will and document this with their presence (for example the German Navy off the coast of Lebanon on behalf of the UN). Any conflicting political views can lead to the deployment of naval forces from other countries and thus create a counter-presence. With sufficient strength and perseverance of the operation, this leads to a neutralization of the original political intention. The duration of the mission, which must be secured by maritime positions, is also decisive here. However, these positions have secure connections to their own sphere of influence, which are always guaranteed in peace. Some of them can be replaced by an efficient sea supply. Superior naval power in peacetime implies potential naval supremacy in war.

Northern Europe and the Hanseatic cities around 1400 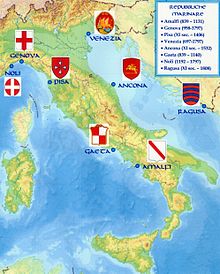 Map of the Maritime Republics

The command of the sea has always played a decisive role in the process of creation of peoples and in disputes between peoples. She has thus significantly influenced the history of mankind to this day. Earlier important sea powers in the Occident were among others (roughly chronological) Persia using Phoenician ships, Athens , Carthage , the Roman Empire , the Byzantine Empire , the Hanseatic League , the Maritime Republics ( Amalfi , Genoa , Pisa , Venice , Ancona and Ragusa ), the Ottoman Empire , Portugal , Spain , the Netherlands , France , England / Great Britain , the USA and the former Soviet Union .