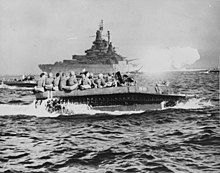 An LVT-4 during the Battle of Okinawa 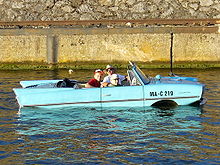 Amphicar 770 in the port of Stuttgart 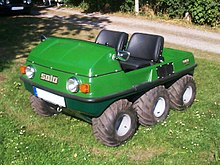 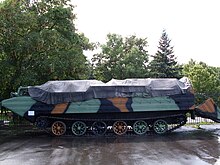 A DUKW during the Second World War

An AmphiCoach GTS-1 in Budapest 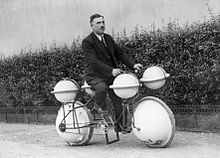 In 1588, the Italian Agostino Ramelli designed a chariot that was to be pulled on land by horses and moved in the water with two paddle wheels by muscle power.

In 1804, the American Oliver Evans developed the Orukter Amphibolos [sic], a steam-powered vehicle with four wheels and a paddle wheel at the rear. By adjusting pulleys, it was possible to switch to the respective drive. The vehicle was designed as a port dredger; after the ditch, the hull was separated from the chassis so that it could no longer return to land on its own.

The first known motorized amphibious vehicle was built in Denmark in 1899 under the name Magrelen Amphibium. Numerous other attempts followed to teach the relatively new automobiles to swim, most of which until the mid-1920s consisted of mounting chassis on boats. On April 19, 1909, Jean Rech from Mehlem was granted patent no. 208869 for a vehicle that could be used on water and on land.

A significant boost in the development of buoyant vehicles was the requirement of the military in World War II to enable the amphibious landings of large units.

In Germany , the VW-128 was initially built for this purpose, a floatable version of the VW Kübelwagens , the spread of which, however, was limited due to poor driving characteristics on land and water.

Only the successor model, the Volkswagen Type 166 floating car , was built in larger numbers. Erwin Komenda , Porsche's first body designer, designed the model. He had his ideas for the swimming car patented by the German Patent Office . If you look at the mechanics, it was a converted KdF car (later known as a VW Beetle ). The floating car was manufactured at the Volkswagen factory in Wolfsburg . The newly founded city was then called the city ​​of the KdF car near Fallersleben .

Regardless of this, the Allies were not inactive either and at around the same time created the Ford GPA , a buoyant jeep, and the DUKW , a small truck . Floatable variants of the Sherman tank , so-called DD tanks , and specially designed Landing Vehicle Tracked also took part in the landing in Normandy . These LVTs, with their numerous versions, formed the backbone of the Allied offensive in the Pacific War .

After the Second World War, several attempts were made to equip the military and civil protection with amphibious vehicles.

So should z. B. the Europa Jeep and the second generation of tactical trucks can float. In the armies of the Warsaw Pact , amphibious vehicles were to be found quite often, while in Western Europe one turned to wading facilities for passing through water hazards on the ground.

An example of a purely civil amphibious truck is the EWK Bison , which was intended for use in disaster control. In addition to the prototype, variants for fire extinguishing and recovery purposes were also to be built.

But also a number of civil attempts have been made to produce amphibious vehicles, e.g. B. Amphicar 770 and Amphi-Ranger ; Most of the floating vehicles, however, are built as custom conversions. Cuban refugees who tried to escape to the United States in converted American classic cars were particularly creative . Allegedly, however, they were always picked up by the coast guard and sent back, their vehicles were sunk.

In London, Seattle and Boston, converted DUKW are used for city tours including river trips.

On September 9, 2016, an amphibious bus from the entrepreneur Erich Berer had its maiden voyage in the Salzach in the city of Salzburg . The two-axle vehicle offers space for 26 passengers in the cabin behind a 2-man crew, has a floating body that protrudes slightly in the shape of a segment of a circle and two propellers. He had already received the nature conservation permit in October 2013, and then the permit under the state's water law and the shipping concession. The vehicle is a one-off production that was built in Linz , Salzburg and Traunstein, Bavaria , and the development of which took four years. Three engines provide a total of 630 hp in addition to a truck traction motor, the vehicle was fitted with two Volvo Penta marine diesel engines - each acting on a screw. Thanks to its lightweight construction, the bus for water and road weighs 7.7 t, is 9.50 m long and air-conditioned.

There are some basic differences with regard to the structure of an amphibious vehicle:

Swimming sausages are the easiest way to make a vehicle buoyant. For this purpose, floating bodies are usually attached to the side of the vehicle , which are either inflatable or solid. Inflatable swimming sausages require more time to become buoyant, but are easier to transport than the usually quite bulky solid structures. They can be used for all vehicles; the modifications to the vehicle are limited.

If the hull of a vehicle is to become buoyant, extensive changes to the bodywork are necessary in order to seal it off against water from the side of the ship. The problem is always the power transmission from the motor, which is usually located inside the cover, to the driven axles and the implementation of the steering column . For this purpose, either the complete drive unit from the gearbox is left outside the body, or only the wheels with suspensions are mounted outside the float and the axles are sealed. The seals used here are exposed to heavy wear and tear due to the constant movement during compression and rebound. In order to circumvent this problem, the Spios company decided not to have a suspension system for its vehicle, which leads to approval problems in Germany and, under certain circumstances, can result in cracks in the outer shell in the area of ​​the axle bushings.

Some amphibious vehicles use a combination of the above options; so were z. B. retrofitted the prototype of the Terrawind boom with inflatable floats to increase stability in the water.

Propulsion in the water

Various construction principles are used for propulsion in water:

In 2019, the organizer, the Linz dentist Michael Stelzl, estimates that there are around 50 to 60 swim cars in Austria, of which around 25 can still swim. In 2018 about 40 vehicles swam in the Attersee.