The title of this article is ambiguous. Further meanings are listed under Mondsee (disambiguation) .

The market town of Mondsee with 3,832 inhabitants (as of January 1, 2020) is located in the Upper Austrian Salzkammergut on the lake of the same name , the southern shore of which partially forms the border with the State of Salzburg .

The entire water area of ​​the Mondsee lies within the municipality of the same name, including the Kreuzstein in the lake . Since the municipal boundary does not run exactly on the shore, there are hundreds of riverside parcels within the Mondsee municipality. The majority of these properties are only used as lake access, the associated settlements are already in the neighboring communities. These parcels are only occasionally built on with residential houses that have Mondsee addresses. The lake itself is located on a single piece of land and has been privately owned since the 18th century .

According to the digital Upper Austrian room information system, there are also the following historical house names in the municipality :

The municipality consists of a single cadastral municipality of the same name and is not divided into further localities (except Mondsee).

The municipality of Mondsee and its neighboring municipalities with municipal boundaries, satellite image. The A 1 western autobahn , which passes north of the town and lake, is clearly visible . 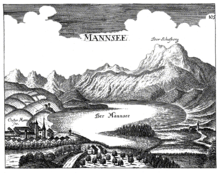 The market square of Mondsee

The community is surrounded by five neighboring communities, one of which is in the Salzburg-Umgebung district  (SL).

Location in relation to Mondsee:

The three neighboring communities of Innerschwand am Mondsee, St. Lorenz and Tiefgraben have a common municipal office in the "Town Hall" on Wredeplatz in Mondsee (similar to a German administrative community ).

Remains of settlements were found under water in the area of ​​the Mondsee near the lake and Scharfling. A rich collection of evidence of Neolithic pottery and tools made of stone and bone was brought to light and interpreted as the remains of a pile-building culture. Science has coined the name Mondseekultur after the main site at Mondsee . It is approximately 2800 to 1800 BC. And extends over most of Upper Austria and parts of Salzburg. Recent research has shown that these are original rural settlements that were later submerged when the lake level rose. The Mondseeland Museum has an extensive collection of pile dwellings.

In Roman times there was a settlement here, as finds show, a road connected it with Juvavum, the Roman Salzburg. Around 600 the Bavarians began to settle the Mondseerland and cleared the forests. In 748 the Bavarian Duke Odilo from the Agilolfinger family founded the Mondsee Monastery . From then on, the development was shaped by the monastery, both mentally and culturally as well as economically.

Until 1506 the Mondseeland belonged to the Duchy of Bavaria. Afterwards it became the property of the Habsburgs. In 1791 the monastery was closed under Emperor Leopold II .

In 1810 the Bavarian field marshal Carl Philipp von Wrede received the abandoned Mondsee Monastery (next to Suben and Gleink ) as a castle with its own rule, Wrede remained the owner even after the area was returned to Austria and promoted the area to the best of his ability (road construction, start of production of the Mondsee Cheese ...).

There has been tourism in Mondsee since 1867, the first steamboat trips began in 1872. In 1891 the place was connected to the Salzkammergut local railway (which was closed in 1957) with a branch line .

In 2005 the church received the title of papal minor basilica .

The monastery was founded in 748 by the Bavarian Duke Odilo and quickly gained in importance, especially due to the many possessions and lands. According to legend, Duke Odilo was hunting on a mountain on the banks of the Mondsee during the night. When the moon stepped out from behind the clouds and lit the path, the Duke was saved from falling into the lake. In gratitude for this rescue, he had a monastery built on Mondsee. 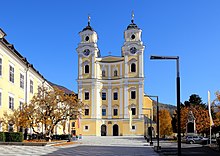 Wredeplatz with the basilica (former collegiate church of Mondsee Monastery)

The renovated vault in the Mondsee basilica (2007)

According to the monastery tradition, the first monks came from Montecassino . Science names old Bavarian monasteries and especially St. Peter in Salzburg as their place of origin. Soon after its founding, Mondsee was one of the outstanding monasteries in Bavaria. The monastery was famous for its writing school and book illumination. The so-called Tassilopsalter had already arisen here before 788 . It is the oldest completely preserved book that was written in what is now Austria. Shortly after 800, the so-called Mondsee Matthew , the oldest German translation of the Bible, was written here. From 831 to 1106 Mondsee was owned by the Regensburg bishops.

The pre-Benedictine monastery soon rose to become one of the most powerful Bavarian monasteries. When Odilo's son Tassilo III. founded the Kremsmünster Monastery in 777 , he called monks from his father's Mondsee Foundation to missionary work in the region. After Tassilo and thus the Agilolfinger were overthrown, the Mondsee Monastery received the rank of a Carolingian imperial abbey and adopted the Benedictine rule in 800 AD .

The so-called Mondsee Tradition Code, which is a collection of important documents and manuscripts on the history of Eastern Bavaria, Salzburg and Upper Austria, is particularly valuable for this region . These documents comprise around 135 copies of documents and go back to the middle of the eighth century AD. When the Mondsee Monastery was closed in 1791, all archive items were handed over to the registry of the Land ob der Enns in Linz , where they were forgotten in the years that followed. Mondsee Monastery has been called "Mondsee Castle" since secularization .

The Salzburg Prince Archbishop Leonhard von Keutschach confirmed, after the Mondseeland had come to the Prince Archbishopric in 1506 as a pledge, on April 4, 1515 a. a. the "previously used" market emblem. On March 27, 1567, Emperor Maximilian II issued a letter of arms to the market at the request of the Mondsee citizenship ; the original is no longer available, the conceptual text has been preserved.

The description of the coat of arms in the two documents corresponds to the representation on the old seals. The oldest known imprint with the Fraktur inscription Sigillum mannsee can be found on a receipt dated September 2nd, 1525. The coat of arms awarded to the market shows a golden, natural (blue-green) color over a "burrowing" (wavy-moving) lake in natural (blue-green) overturned crescent moon, each accompanied by a golden, six-pointed star on the right and left; This coat of arms was still used in the seal on a document from December 20, 1749.

After the abolition of the subordinate relationship (1848), the market took over the "second" monastery coat of arms, which appeared at the beginning of the 17th century, and has retained this representation to this day. The municipal colors are used according to old traditions without verifiable approval.

In 2024, Mondsee will host the 21st  European Shooting Festival , an event of the European Community of Historical Shooting .Template: future / in 4 years

The tourist information is located in the former citizens' hospital.

On the promenade of Mondsee.

The Research Institute for Limnology (ILIM), a limnological institute of the University of Innsbruck, is located in Mondsee . The overarching research goal is to understand the structure, function and dynamics of freshwater ecosystems. The institute is primarily devoted to basic research, but also questions of applied limnology.

"Divided; up in blue a golden , crescent-shaped sifted full moon ; Down in silver golden three, two asked for one dugouts with black , diagonally right fire strips linkshin rowed by a respective red -clad, standing fisherman with a black felt hat . "

The municipality colors are: blue - white

The novel " Unter der Drachenwand " by Arno Geiger about the soldier Veit Kolbe, published in 2018, is set in Mondsee in 1944.

Cities and municipalities in the Vöcklabruck district