This article covers the type of fabric. For more meanings, see felt (disambiguation) . 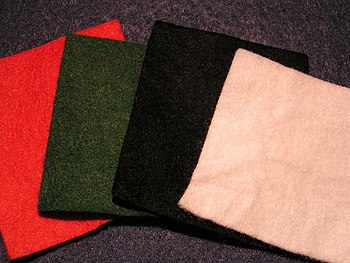 Felt is a flat textile structure made from a disordered fiber material that is difficult to separate; So felt is a non-woven textile . If finished fabrics (e.g. loden ) are felted, one speaks of boiled fabrics . Felt is made from man-made fibers and plant fibers by dry needling (needle felt) or by solidifying with water jets exiting from a nozzle bar under high pressure.

Felt made from sheep's wool (wool felt) is a felt or press felt. The cleaned, combed, and possibly dyed raw wool , processed down to the fleece, is brought into a firm bond by mechanical processing ( milling ). The individual fibers are intertwined with one another in a disorderly manner. The hair of sheep (wool) has a scale-like surface, the microscopic platelets of which permanently hook into each other during milling .

In the specialist literature, the opinion is sometimes expressed that felt as a textile surface structure is older than woven fabric, but there is currently no evidence for this. It has been speculated that the wall paintings in the Stone Age settlement Çatal Hüyük in Central Anatolia around 6000 BC. BC go back to felt carpets, but this is not very convincing.

A possible felt find from Beyçesultan from the Early Bronze Age II (approx. 2600 BC) is considered to be the oldest evidence of this technology to date.

During excavations in Käwrigul in the Mongolian Autonomous District of Bayingolin in western China, which is predominantly inhabited by Uighurs , felt hats from around 1800 BC were found. Found.

Caps made of this material were also discovered in megalithic tombs in Denmark and northern Germany. They date from around 1500 BC. Chr.

In the grave mound 3 of Bleckmar , remains of a felt cap were found in a woman's grave from the Middle Bronze Age. Finds near Behringen in Lower Saxony also show that felt production was known early on in Northern and Central Europe.

As mentioned above, there are early indications of its existence from the Tochars from northwest China. From the 3rd century BC You can also find references to this in ancient Chinese literature.

Finds in the former Phrygian capital Gordion from around 700 BC BC show that felts were known in Anatolia at that time. Also Assyrian texts describe the felting The richest finds earlier felts are from the Pazyryk -Gräbern. The Kurgane of the Scythians from the 5th century BC, discovered in the eternal ice of the Altai Mountains . BC felts contained astonishingly uniform thickness. From this it can be concluded that the production method is very advanced. These finds show a versatile use of the felts, sometimes artfully patterned by appliqués.

Felts were well known among the peoples of antiquity in the classical period, as evidenced by several mentions in the literature of the Greeks and Romans and felt-making workshops unearthed in Pompeii .

The Mongols and Tibetans were regarded as masters of felt making in Asia . For both peoples there are indications of an early use of this material, which was particularly important for nomadic groups. They used felt not only for their clothing, but also to make their tents and yurts .

Wet felting (also summarized under the term fulling felt ) of the unbound fleece with warm water ( steam ) and soap (alkaline felting aid) is the traditional, artisanal processing of wool or animal hair . In combination with warm water and soap, the scales rise up in the top cuticle of the hair . Milling carried out at the same time causes the individual fibers to penetrate each other. The scales that have been set up wedge together so tightly that they can no longer be loosened. The workpiece shrinks considerably and a solid textile fabric results. The final shape can be worked out seamlessly from one piece. Since fulled felts consist of animal fibers, sometimes with the addition of viscose wool , it is a natural product that is biodegradable.

With dry felting , the dry wool is shaped with the help of special felting needles . This method is the precursor to needling with a needle bar. Needle felt is made mechanically with numerous barbed needles. The barbs are arranged the other way around like a harpoon , so that the fibers are pressed into the felt and the needle easily comes out again. Repeated piercing entangles the fibers with one another and possibly then post-treats them chemically or with steam. Such needle-punched nonwovens can be made not only from wool, but from practically all other fibers. Needle felt is the industrially produced felt that is common today. In addition, there is still the entanglement with a pulsed water jet. Fibers without a scale structure can also be used here, such as polyamide and polyester .

The handicraft tradition of felting has recently been rediscovered by many people and small businesses. This creates an art of use that primarily includes robust and warming clothing, for example scarves , jackets , vests , hats , slippers and slippers , but also includes figurative works.

The only individual reference "Filz-Lexikon by Tomako" only refers to felt made of wool. It is uncertain whether the information there, for example on flammability, also applies to felts made of other materials. In addition, the specified website is not a reliable source of information. 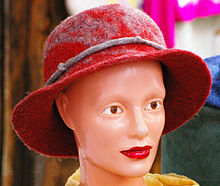 The cause of holes in the felt made of natural fibers can be moths.

In the case of superficial dirt, it is sufficient to take a brush or vacuum the felt. Hand washing is also possible. To do this, the felt should first be moistened, then rubbed in with shampoo or heavy-duty detergent and then rinsed out. After drying, the felt can be brushed back into shape; if that doesn't work, an iron with a little steam can help.

The hardly separable felt fibers provide the language image for the meaning of felt in the figurative sense. This is understood to mean that a group of people is linked by - especially financial - dependencies in an inscrutable and diverse way (see also: Klüngel , corruption , rope team ). In a similar way, the language image is used as an adjective and describes a system as “matted”.