Named Tocharer (Latin Tochari even Thocari , Greek Τοχάροι Tocharoi designated) originally ancient and Byzantine writers nationals of Central Asian nations that usually the Scythian tribes were counted. According to a widely held hypothesis, they are identical to the Yuezhi of the Chinese sources. The ancient Tocharers gave their name to Tocharistan (in northern Afghanistan ) from late antiquity to the 13th century.

Speculations about the language of the inhabitants of Tocharistan have led to the fact that these Tocharers themselves became namesake for the Tocharian language . Whether the Tocharians actually spoke Tocharian is a matter of dispute. It is not known which ethnic group was associated with this language and who spoke it to what extent. Written evidence of the Tocharians mainly covers a period from the 5th to the 8th century.

The term Tocharer can therefore refer to various things: ancient peoples, the later inhabitants of Tocharistan, the only vaguely known speakers of the Tochar language - and finally ethnic groups who are assumed to have spoken Tocharian.

The geographer Strabo and the historian Pompeius Trogus write to the ancient Tochars a role in the conquest of the Graeco-Bactrian empire and armed conflicts with the Parthians in the 2nd half of the 2nd century BC. Chr. To.

The ancient Tocharers are usually equated with the Yuezhi (Yüeh-chi), a people who settled in the area of ​​the Chinese province of Gansu . The Xiongnu defeated them in 176 BC. Chr., After which the Yuezhi into largely zhetysu emigrated Central Asia. In 129 BC They crossed the Iaxartes ( Syrdarja ) and settled in Bactria . This landscape on the upper Oxus ( Amu-Darja ) today includes southern Uzbekistan , Tajikistan and northern Afghanistan .

The tribe or dynasty of the Kushana emerged from the Tochars in this area, and they established an empire in Bactria in the 1st century AD. The kingdom of the Kushana later expanded over large areas in what is now Afghanistan, Pakistan and India and reached its greatest extent under Kanishka I. It was only after its decline that the name Tocharistan came up for areas in Bactria where the ancient Tocharians had once settled. In older literature, Tuhhara or Toyapot are also often used . 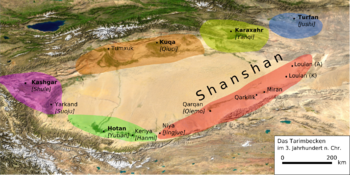 Small states (color fields) and most important trading cities in the Tarim Basin in the 3rd century AD. 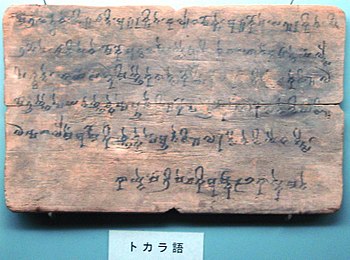 Around 1900 European and Japanese researchers discovered scrolls in the Tarim Basin, mostly religious, especially Buddhist, in content. On the scrolls that German researchers found in the north-north and north-east Tarim Basin near the oasis cities of Aksu and the surrounding area in the west via Kuqa , Karashahr to Turpan in the north-east. An unknown language was discovered in the Indian script.

Based on a translator's note in an ancient Uyghur text, it was found that the Uyghurs referred to this language as twgry , and a relationship was established with the Tochars. This assignment was controversial from the start. Several bases of this assignment were later refuted and an assignment of these languages ​​to the Wusun was assumed.

From around 800 onwards, the Tocharian language, which had existed alongside the ancient Uighur literature, expired . To what extent it was still a living language at this point in time is unclear.

This article or section needs to be revised. Details should be given on the here . Please help to improve it , and then remove this flag.

The "Tocharers" as the speakers of the Tocharian languages ​​are also assigned to mummies of people with an often European appearance that were found in the Tarim basin.

In the Ördek necropolis and some other sites in the northeastern Tarim Basin between the oasis cities of Turfan and Kucha, mummified corpses were examined in the dry, sandy desert climate of the Taklamakan and the Lop Nor desert . The older mummies were relatively large (e.g. 1.76 meters) with western features and light hair colors, while the younger mummies were more East Asian. The regular burial took place in burial chambers. The mummies date from 1800 to 1200 BC. And to 200 BC BC to 800 AD Due to the location of the necropolis, they are assigned to the populations of Kucha and Turfan. Their anthropology and textile weaving techniques suggest immigration from the west. The genetic analyzes carried out also support the classification. Whether there are ethnic relationships with the Tochars and which connections to Indo-European peoples can be assumed is a matter of dispute.

It is believed that the cultural and linguistic profile of this population changed in the end of the 1st millennium BC. . Emerged AD, possibly in conjunction with the Afanasevo culture in the Altai Mountains and in the valley of the Yenisei . According to an archaeologically supported hypothesis, people of the Afanasevo culture in the 2nd millennium BC may have come from there. Migrated to the Tarim basin.

Individual mummies have surgical sutures made with horsehair. Female mummies carried pouches containing healing plants and a small knife, presumably to help them chop up.