Bactria ( Persian باختر Bakhtar , Old Persian Bāxtriš , Avestan Bāx'iš , ancient Greek Βακτριανή Baktriane , Latin Bactria , Chinese  大夏 , Pinyin Da Xia ) is the historical name of a landscape around the former capital of Bactria (today's Balkh , Afghanistan ), the north of the Hindu Kush to the south and of the Amu Darya River. The area from which the founder of the religion Zarathustra may have come from today belongs largely to the north of Afghanistan and to the southern areas of the Central Asian states of Tajikistan , Uzbekistan and Turkmenistan . The inhabitants of Bactria were partly sedentary and partly still nomadic Iranian peoples . The main part formed the Bactrians , a smaller one the Scythians (more precisely: Saken ). 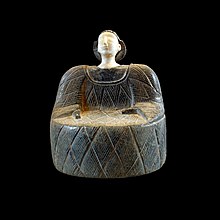 A first settlement of the area can already be made out in prehistoric times. In the late Neolithic and Eneolithic from about the middle of the 5th millennium BC. Until about the middle of the 3rd millennium BC. The Gissar culture can be traced beyond BC. In the subsequent Bronze Age , different cultures take turns. While the Ghirdaj culture, the Šortugai culture, the Dašly culture, the Beškent-Vachš culture and the Sapalli culture are to be found in the early and middle part of this epoch, the Tillja culture, the Kučuk culture, follow at the end of this epoch , the Kyzyl culture and the Tašguzor culture.

The Persian great king Cyrus II conquered Bactria around 538 BC. And made it a satrapy of the Achaemenid Empire . The land was famous for its fertility, horses and wealth. It was therefore also called the "Empire of 1000 Cities". This suggests that the degree of urbanization in Bactria was very high. The Bactrian cavalry was an important part of the Persian army.

After the extensive conquest of Persia by Alexander the Great around 330 BC. BC tried the satrap of Bactria, Bessus , to rise to the king of Bactria, but he was defeated by Alexander. Bessus left Darius III. murdered in Bactria after he had sought refuge from Alexander from town to town. Bessus himself was later extradited to Alexander and killed. 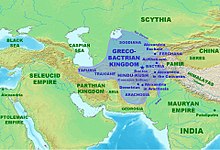 The Greco-Bactrian Empire in its maximum extent around 180 BC. Chr.

After Alexander's death in 323 BC His successors, the Diadochi , fought and eliminated his family. At the end of the Diadoch Wars, Bactria fell to Seleucus I , one of Alexander's former generals, and to the Seleucid Empire named after him . Seleucus' son Antiochus I tried from Bactria to master the growing power of the Indian Mauryan empire . However, since the Seleucids could not effectively control the area that was far away from their central rulers, Syria and Mesopotamia, separatist tendencies soon became noticeable. The Seleucid governor Diodotos split around 240 BC. Bactria from the Seleucid Empire and made itself independent. Soon afterwards, Bactria was also isolated from the rest of the empire by the attacks of the Parthians .

With this Diodotos founded the Greco-Bactrian Empire , which had spread over almost all of Khorasan and later also included part of India . Antiochus III. came across at the end of the 3rd century BC BC once more as far as Bactria, but he did not achieve more than a formal subordination of the country. After a war between Demetrios and Eukratides , the country split into the Greco-Bactrian and Indo-Greek empires 80 years after it broke away from the Seleucid Empire . Both were hard-pressed by the Parthians and the Sakas . The Greeks Alexandros and Hermaios are named as their most important kings . The Parthians conquered the south of Khorasan (today Afghanistan), the Saks immigrated to Sistan , where they partly settled down. Some of the Saks also settled north of the Hari-Rud.

141-129 BC BC Bactria was overrun by the Yuezhi . Hermaios followed in the 1st century BC. Chr. A non-Greek king, Kadphizes ( Kushan , Yuezhi Empire).

In the 1st century AD, King Gondophares, who was descended from the Parthians, ruled over most of the empire; under him, according to legend, St. Thomas proclaimed Christianity in Bactria. The Turuschka dynasty ruled until 200 , when the rule of the Kushans and (in the southwest) the Neo-Persian Sassanids put an end to this remnant of Hellenistic culture in the east and Greek was again displaced by native languages. 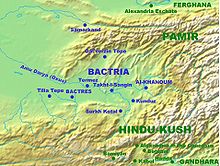 Some important cities in Bactria

After the Kushana conquered Bactria, they were culturally and linguistically assimilated in Bactria. So the Kushana adopted the Bactrian language, culture and even religion. Later some rulers also converted to Buddhism. The ruler of the Kuschana Kanischka was a Zoroastrian himself . This is proven by the discovery of a Zoroastrian fire temple in Baghland, which Kanischka had dedicated himself. The Kushana established an empire that stretched from the Aral Sea to western China and central India. This made Bactria, next to the Sassanid Empire, the Empire of China and Rome, the most powerful empire in the world at that time and at the same time one of the most highly developed. Bactria, in general, Khorasan became the center of science, Buddhist-Hindu theology and world economy . The Buddha statues destroyed by the Pashtun Taliban in the Bamyan Valley also date back to the time of the Kushana. All of these achievements were due to both the Silk Road and the popularity of the Kushana in both Asia and Europe.

The so-called Iranian Huns soon appeared , but they were very probably not directly related to the Huns in Europe. The concept of the Iranian Huns goes back to the numismatic research of Robert Göbl . When groups of the “Iranian Huns” (cf. also Chionites ) attacked both empires, it was primarily the Kushana who drove the foreign warriors from Khorasan. The rule of the Kushana lasted almost four centuries until they were replaced by the Kidarites under their leader Kidara. The Kidarites were followed by three more waves of the Iranian Huns: the Alkhon group (which expanded into northwest India in the early 6th century), the Nezak group (which ruled the Kabul area) and finally the Hephthalites .

The Hephtalites (also known as the "white Huns") became the new rulers in Bactria and took over the Bactrian language and administrative tradition. The Hephtalites established their own empire for a short time in both Khorasan and what is now Iran. At times even the Sassanid Empire was subject to tribute until Chosrau I, with the help of Turkish nomads, completely smashed the Hephthalite Empire . Then Bactria became a Persian province again, while the lands beyond the Oxus ( Transoxania ) were taken by the Turks.

As a result of the Islamic expansion (642 main battle with the Sassanids at Nehawend , 712 conquests on the Chinese border) Bactria became part of the Arab caliphate . At the same time the country was ravaged by Persians fleeing the Arabs. As in Gandhara, the immigrants made up the main population and completely assimilated the actual indigenous population. According to the researchers Dupree and Richard Nelson Frye, the population of Persian descent was so high that it assimilated the native, East Iranian-speaking population in a short time or over the course of the following 200 centuries. The East Iranian dialects only survived in isolated cases. Remnants of the Persian-Bactrian population, who still speak Eastern dialects today, speak Pamiri .

Since the 10th century, the area of ​​Bactria was ruled by various Persian , Turkish and Mongolian dynasties , later in the 18th century by the Pashtuns .

In the 19th century Great Britain and the Tsarist Russian Empire also fought over influence in this region.

The "gold of Bactria" 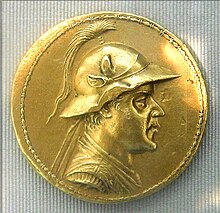 Gold stater of Eucratides I. 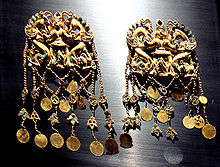 Bactria was already known for its gold in ancient times . The Bactrian gold was legendary. The Persian King Darius I already mentions gold from Bactria in his building inscription on the palace of Susa . However, Bactria was just a middleman. The actual region of origin, on the other hand, was Siberia , from where it was traded to Bactria. Although Greco-Bactrian gold coins are not very numerous, the largest ancient gold coin comes from Bactria and is a minting of Eucratides I (around 171 to 145 BC).

The term gold from Bactria has recently been taken up again to refer to a rich gold treasure. At the end of the 1970s, Soviet archaeologists under Viktor Sarianidi found the remains of an ancient burial ground near Tilla Tepe in what is now Afghanistan . More than 20,000 objects, mostly made of gold and semi-precious stones, were recovered from six graves, representing one of the most important archaeological finds of the 20th century. Because of the uneasy political situation, the excavations had to be stopped and the collection was handed over to the National Museum in Kabul . In 1989 they were deposited in the central bank located in the presidential palace. It was only in 2004 that the finds, believed to have been lost in the meantime, were recovered from the basement rooms there. They had survived the turmoil of the war years completely unscathed.