This article is about the people. For the horse breed, see Arabs (horse) .

The Arabs ( Arabic العرب, DMG al-ʿarab ) are a Semitic-speaking ethnic group on the Arabian Peninsula and in North Africa , most of which are native to the Arab countries . As non- autochthonous communities, Arabs also live in the diaspora in many countries around the world, predominantly in South and North America as well as Europe , especially in Brazil , Argentina , France and the United States .

Since the definition differs greatly in different cultures and times, a clear assignment is only possible in the appropriate context. For Arabs, strangers who do not speak Arabic correctly are considered Adscham . Ethnic groups such as Berbers , Somali , Kurds , Turkmens , Syriacs , Habescha and others who live in Arab countries are not counted among the Arabs . Many of them have mastered Arabic as a second language .

Origin of the word Arab 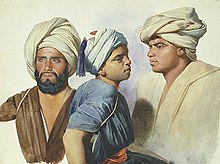 There are several approaches to the origin of the word ʿarab . Some trace it back to the Semitic root for "west" which was applied by the inhabitants of Mesopotamia to the peoples west of the Euphrates Valley ; also Abar for "travel, move on" is assumed to be possible.

Like the Arabs, the Hebrews are nomads , Semites , migrating from central Arabia . Both terms “Arabs” and “Hebrews” could come from the word ʿabara , which stands for nomadic “wandering” in both languages. The Arabic ʿibri and the Hebrew 'ivri still mean “Hebrew” today, ʿarabī (“Arabic”) could be a metathesis typical of Arabs . أعرابي/ aʿrābī andعربي/ 'Arabī : A'rabi referred nomads while 'Arabī stands for the inhabitants of the cities.

The oldest traditions of the term come from the Assyrians (inscription from the year 853 BC under Shalmaneser III , 858–824 BC), from Genesis (10th chapter) and from Aeschylus (Prometheus).

In the Assyrian texts, the terms Arabi , Arabu or Urbi often appear as a designation for a region or for a people who were or lived in the northern region of the Arabian Peninsula . It is to be distinguished from the people of the Sabaeans , who lived in the Kingdom of Saba on the territory of today's Yemen . Herodotus and many other Greek and Latin writers referred to the entire Arabian Peninsula as Arabia and all of its inhabitants (including those of the eastern Egyptian desert between the Nile and the Red Sea ) as Arabs .

In the case of the remains of the tribes ( Sabeans ) living in the south of the Arabian Peninsula , the term is used for the first time by people living on the Arabian Peninsula. Bedouins are called Arabs there . The word thus serves to separate the settled from the nomadic population.

In Arabic, but still in Nabataean script , the word 'raber appeared in a text in the Namara funerary inscription in the early 4th century AD and tells the story of a "man from Qais " (Imru al-Qais), who claimed supremacy over all nomads in northern and central Arabia.

According to Hamilton Gibb, Arabs are those “for whom the mission of the Prophet Mohammed and the memory of the Arab Empire are the central historical fact and who also regard the Arabic language and its cultural heritage as their common root and hold fast to it. "

Prehistoric, anthropological and philological-linguistic research on the Arabian Peninsula has proven, in addition to the Semitic Arabs, an old hunter population of partly African descent and a dark-skinned remaining population of Indian origin.

Change of meaning of the word Arab

Arabs in caftans during Ramadan in the Iranian city of Ahvaz

The meaning of the term Arab has changed somewhat:

The Arabs in Genealogy

In the Bible (e.g. 1 Chron 1: 29-33) the Arabs are described as the descendants of Ishmael . This idea was also widespread among the Arabs themselves. A tradition that al-Azraqī cites in his story of Mecca , referring to Ibn Ishāq , says that God made the Arabs emerge from the descendants of the two Ishmael sons Qaidār and Nābit.

On the history of the Arabs

A genetic study published in 2019 in the European Journal for Human Genetics in Nature showed that populations in Western Asia (Arabs), Europeans , North Africans ( Berbers ), South Asians ( Indians ), and some Central Asians are closely related and clearly from sub-Saharan Africans or East Asian population groups can be distinguished.

The most important source for the early history of the Arab tribes are the Assyrian inscriptions and reliefs. They mainly report on military campaigns, but also provide information about everyday life and religion. The reliefs of the north-west palace of Nineveh from the time of Aššurbānipal depict Arabs riding camels in pairs and shooting arrows at the Assyrian troops. The front rider steers the camel, which is only attached to a simple blanket attached to the neck and tail by straps, with a staff. The riders have shoulder-length hair and a short full beard and are only dressed in a voluminous loincloth.

In the course of Islamic expansion, the Arabs spread from their original territory on the Arabian Peninsula to North Africa, Spain, Palestine, Syria and Persia in the 7th and 8th centuries.

The Islamic sphere of influence extended to the Arabian Peninsula until the death of Muhammad in 632 AD , the outskirts of which were largely under the control of Eastern Current and the Sassanid Empire .

For a long time, these two great powers of late antiquity had largely relied on Arab tribes to defend their borders. But the Sassanid great king Chosrau II had already destroyed the empire of the Lachmids , whose capital Hira was in what is now southern Iraq, around 602. A little later, in a smaller battle with the Persians, the Arabs found that their light cavalry was equal or superior to the heavily armored Sassanid cataphracts .

The Arabs were favored by the unusual weakness of their opponents: Since the fifth century, the Eastern Romans relied in many cases on the partly Christian Ghassanids who ruled south of Damascus . But both East and Persia were exhausted by a long war that both fought until 629, see Herakleios and Roman-Persian Wars . Both empires were completely fixated on each other and militarily not prepared for an attack by the Arabs. Shortly before the death of Emperor Herakleios (610 to 641), who had struggled to defeat the Sassanids and thus saved his empire once more, the main phase of Arab-Islamic expansion was to begin - at a time when the Romans were paying hired their Arab allies.

The settlement area of ​​the Arabs

There are currently around 350 million Arabs living on earth, including around 200 million who are spread across the 22 Arab countries. They make up the vast majority of the population in Egypt , Saudi Arabia , Iraq , Yemen , Syria , Jordan , the Palestinian Territories , Lebanon , Kuwait , Oman and the Maghreb states . In the Arab states of Bahrain , Qatar , the United Arab Emirates , Sudan , Somalia and Djibouti , the Arabs form a minority. As autochthonous minorities, they are also in non-Arab countries such as Iran (2 million, especially in the provinces of Chuzestan and Hormozgan ), in Pakistan (3.5 million, especially in Karachi , Lahore , Islamabad and in the north-west province ), in Turkey (excluding refugees more than 2 million), especially in the provinces of Hatay , Şanlıurfa Mardin , Muş and Siirt and in Israel (1.4 million, mainly in the northern district and in the Jerusalem district ). There is also a large Arab diaspora in America and Europe , numbering around 25 million. Most of them live in Brazil (12 million), Argentina (3.5 million), France (3.5 million), and the United States (1.5 million). 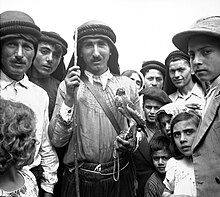 Introductions to the history of the Arabs

Individual themes in the history of the Arabs

Christians in the Arab world