Islamabad ( Urdu اسلام آباد 'Residence of Islam' ) is the capital of Pakistan . The city, which was only founded in the 1960s, now has a population of over 1 million. As a planned city , it was laid out on a chessboard-like ground plan at a climatically extremely advantageous location on the edge of the Pothohar plateau, below the Margalla hills. Islamabad historically belongs to the Punjab , but was spun off from the province in 1970 and became an independent capital territory .

In a ranking of cities according to their quality of life, Islamabad was ranked 195th out of 231 cities worldwide in 2018. The quality of life was thus higher than in other Pakistani cities such as Karachi (place: 205) or Lahore (place: 203).

Rawalpindi , directly adjacent to the south , is considered to be Islamabad's sister city. In fact, Rawalpindi is still the larger city (in terms of inhabitants) and the lively market center of western Punjab. The majority of the military headquarters are also located there. Islamabad, on the other hand, is the modern and spacious city, very clean and quiet by Pakistani standards. The city is efficiently divided thanks to the sectors: each sector has certain facilities such as a mosque and a market . The city's commercial center, known as the Blue Area , stretches along Jinnah Avenue, named after Pakistan's founder Muhammad Ali Jinnah . The east end of the Blue Area extends to Parliament Road, where most of the government buildings are located.

The north of the Margalla Hills on the outskirts of the city has been converted into a national park. 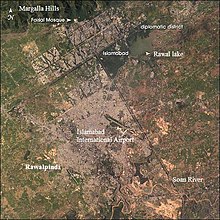 Islamabad and Rawalpindi from the air; the division into sectors is easy to see.

From the independence of Pakistan in 1947 to 1958, Karachi was the capital of Sindh in the south of the country. Reluctance to concentrate investments in Karachi led to the idea of ​​building a new, more conveniently located capital. When Muhammed Ayub Khan became President of Pakistan in 1958, he ensured that the construction of the new capital was a top priority. The area immediately northwest of Rawalpindi was chosen , which served as the provisional capital and was considerably expanded. Due to Islamabad's location at the foot of the first foothills of the Himalayas and three artificially created lakes (Rawal, Simli and Khanpur), the temperatures here are much more balanced than in Rawalpindi, which is only 15 kilometers away.

The Greek urban planner and architectural theorist Konstantinos A. Doxiadis planned and implemented the new capital and its sister city Rawalpindi. The groundbreaking ceremony took place in 1959 and work began in 1960. Doxiadis and his staff had previously carried out extensive research into Pakistan's lifestyle. Each unit was set to a size of 800 acres (approx. 3.2 km²) and divided into four sub-sectors. This procedure guaranteed an optimum of infrastructure and personal proximity. At the same time, a city in the country was planned and implemented in the appropriate dimensions. Due to a chronic lack of money, the city grew only slowly - in fact, the government did not finally make Islamabad the capital until the early 1980s, although it had officially held this title since 1966. Until then, only about 250,000 people lived in the new city. That changed dramatically during the 1990s - the population grew rapidly and new sectors were created.

On September 20, 2008, a terrorist attack was carried out on the Marriott Hotel in Islamabad. 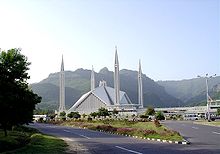 The Faisal Mosque in Islamabad was completed in 1984. It is currently the largest closed mosque in the world.

Islamabad's architecture is a mixture of Islamic tradition and modernity. The Saudi Pak Tower is an example of the combination of Mughal Indian decor and modern architecture. In the city is the Faisal Mosque , known for its eye-catching construction and enormous size. The Quaid-i-Azam University is located in Islamabad, as are the government buildings such as the National Assembly, the Supreme Court and the President. Most of the foreign embassies are also in Islamabad today. Another landmark of the city is a huge, silver globe, erected in 2004 as part of Pakistan's hosting of the SAARC summit. The most important sports facility in Islamabad is the Jinnah Stadium .

The city is today characterized by numerous security measures in the wake of past attacks. The large luxury hotels Serena and Marriott, but also, for example, the fast food restaurant McDonald’s , are like shielded fortresses. Before a vehicle enters, it is checked for explosives and weapons by private security personnel using mirrors and an underbody camera, and sometimes also with bomb detection dogs. Bomb protection walls several meters high were erected on buildings at risk and entire streets were closed to general traffic. The street scene is characterized, especially as soon as you approach the government and embassy districts, by armed checkpoints for vehicle and personal control as well as by a large number of road obstacles.