This article covers the former Punjab Province in British India, for other meanings see Punjab (disambiguation) . 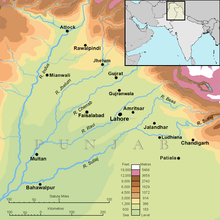 Topographical map of the Punjab, from which the name “Five Rivers Land” becomes clear 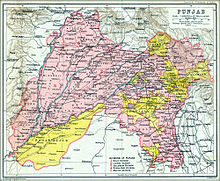 The Punjab in 1909. The area directly administered by the British is pink, the princely states are marked in yellow.

Map of Punjab against a backdrop of today's borders 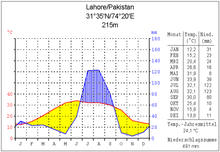 The Punjab , Germanized Punjab (also Pundschab ), was the name for a former province in British India from 1849 to 1947. In 1947 the area was divided between the now independent states of Pakistan ( Punjab Province ) and the Union of India ( Punjab State ) divided up. The name Punjab ( Punjabi : ਪੰਜਾਬ panjab pañjāb ) is derived from Persian پنجاب pandschāb , DMG panǧāb , 'five stream land ' (fromپنج pandsch , DMG panǧ , 'five' andآب ab , DMG āb , 'water') ab.

Geographically, Punjab denotes the wedge-shaped river level of the five left-hand Indus tributaries Jhelam , Chanab , Ravi , Beas and Satluj . The western boundary of the Punjab is formed by the Suleiman Mountains on the border with Afghanistan . To the north the Salt Range and the Himalayas border the Punjab , to the south the Thar desert and to the east a low watershed to the Ganges lowlands. The area of ​​the Punjab is mainly formed by extremely fertile Quaternary alluvial fans , which are 10 to 15 m above the valley floor. It is the largest closed irrigation area on earth, with an irrigation area of ​​102,000 km² almost four times the irrigation area of ​​the Nile (26,000 km²).

Traditionally, only the areas in the immediate vicinity of the rivers were irrigated in early summer by directing the flood of the summer monsoon onto the fields. During British colonial rule, the construction of dams and canals made it possible to use higher-lying areas for agriculture through year-round irrigation and to achieve several harvests per year.

In 1960, India and Pakistan regulated water use in Punjab in the Indus Water Treaty. According to this, India may divert the upper reaches of the Ravi, Satluj and Beas rivers into its national territory, but must ensure that Pakistan has access to the waters of the Indus, Chanab and Jhelam rivers. In order to enable year-round irrigation on the one hand and to prevent flooding during the summer monsoon on the other hand, additional dams and canals were built.

The expansion of the irrigated land had serious ecological effects. Due to the year-round water supply, the groundwater level rose sharply and extensive areas became swampy . In the southern part of Punjab, the high temperatures and the resulting strong evaporation with low rainfall (see Multan climate diagram) lead to the salinisation of the soils . One tries to solve this problem by creating wells up to 100 m deep and pumping out the groundwater.

The oldest traces of settlement in Punjab go back to the time of the Indus culture , this area was mainly influenced by Harappa . During the Vedic period , the Punjab was a cultural center of the Indo-Aryans , the Ramayana is said to have been written by Valmiki near the present-day city of Amritsar .

The western edge of the Punjab was controlled by the Persian Empire and controlled by Alexander the Great in 326 BC. Conquered. Later, the area belonged to the Kushan -Reich before this group of the so-called Iranian Huns ( kidarites , Alchon , Nezak and Hephthalites ) was replaced.

The Muslims' first forays began soon after 700 , but it was only with the establishment of the Sultanate of Delhi (1206) that they were able to firmly subjugate the region. The year 1399 saw the invasion of Tamerlan's armies , in which Delhi was completely destroyed and the whole region devastated. With the Battle of Panipat in 1526 the Mughals - descended from Tamerlane - came to power, who made Punjab a political center of all of India; Delhi and Lahore became residences.

The appearance of Guru Nanak (1469–1538), the founder of the Sikh religion, represents a turning point in the history of Punjab, which is still significantly represented in Punjab today and is most important in the "Golden Temple" ( Harmandir Sahib ) of Amritsar Sanctuary has. All attempts by the Mughals failed to eradicate the newly established religion, which rejects the Hindu caste system and believes in a universal God.

After the collapse of Mughal rule, the Punjab was conquered by the Marathas in 1756 and was thus no longer under Islamic control for the first time in centuries. The Marathas, for their part, were defeated in 1759 by the Afghan ruler Ahmad Shah Durrani , whose invasion devastated all of northern India. In this chaos, the Sikh ruler Ranjit Singh was able to take power in the Punjab and establish a Sikh empire , which soon after his death in 1839 got into inner turmoil. After the First Sikh War , the Punjab suffered territorial losses until it was annexed by the British on March 29, 1849 . Only the Muslim state of Bahawalpur was able to maintain its independence from Ranjit Singh by submitting itself to British patronage as early as 1833. It existed as a princely state until 1947.

The Punjab also played a central role in British India, especially since the capital was moved to Delhi in 1912. Above all else, the British had an interest in promoting the Sikhs, from whom they recruited the most loyal troops. The infrastructural and educational measures of the British were just changing the Punjab and creating a new class of education, which from the 1920s onwards tended more and more towards the independence movement.

The actual independence of the subcontinent in 1947 was dramatic. The Punjab was between the two successor states divided - the dividing line ran halfway between the two major cities Lahore and Amritsar. In the course of this division, the flow of refugees from Hindus and Sikhs from western Punjab and Muslims from eastern Punjab got out of control. There were civil war-like scenes that dragged on for several weeks. Since then, the Punjab has been divided into a Pakistani province and an Indian state. In Pakistan, the Punjab is predominant in that it is by far the most populous province. The Indian Punjab, on the other hand, is an industrial center and one of the richest states.

The flood disaster in Pakistan in 2010 was the worst flood for the area since 1929. Houses were washed away, bridges and roads were badly damaged, cattle drowned and crops were largely destroyed.