This article deals with the desert area in India; for further meanings see Thar (disambiguation)

The Thar (also Tharr or Great Indian Desert , Hindi थार मरुस्थल Thaar Marusthal , Sindhi ريگستان ٿر) is a desert and semi-desert area in the Indian suburbs in the area of Rajasthan ( India ) east of the lower Indus .

In the southeast of Pakistan the Thar merges into the Cholistan . The Cholistan is located in the southeastern area of ​​the Punjab and in the eastern part of Sindh . Half of it is a sandy desert , also with typical dunes .

A young Muslim woman in the Thar Desert near Jaisalmer, 2009 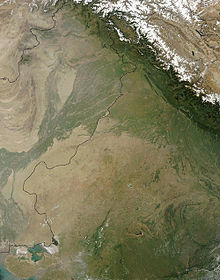 Satellite photo of the Thar; the Pakistani state border is also shown

The definition of the extent of the Thar depends on how much of the transition area is included in the thorn savannah. According to the WWF , the Thar covers an area of ​​238,700 km². The north-western areas of the thorn bushes cover a further 488,300 km².

The history of the origin of the Thar desert is controversial among scientists. Some believe it is 4,000 to 10,000 years old. According to others, the aridity of this area began much later. According to this, the Thar is said to have only developed between 2000 BC. BC and 1500 BC . Chr have formed after the current Ghaggar dried up east of the Indus. Today the river only carries water periodically during the monsoons and silts up in the northeast of the Thar. With new remote sensing it was observed that in the late Quaternary climate change and shifts caused by plate tectonics had an important influence on the rivers and their drying out. Furthermore, numerous “paleo canals”, old dry river beds, were discovered.

In the middle of the Cholistan lies the dried up river bed of the Hakra , the continuation of the Ghaggar in Pakistan.

The remote sensing is largely useful to the Paläokanäle to discover in desert areas. Various digital techniques are used to analyze satellite images. Today's apparently disorganized state of the rivers in Rajasthan is attributed by many researchers to climate change in the Quaternary, especially in the Holocene .

The Thar is a sandy desert that has numerous thinly overgrown dunes, which can be up to 150 m high. There are three types of dunes: transversal, longitudinal and barchane . The longitudinal ones, which predominate, run from northeast to southwest, oriented according to the winds in the dry season. The transverse dunes, perpendicular to the wind direction, are mainly in the northeast of the Thar. The Barchane (sickle dune with protruding sickle ends) can be found in the Central Har.

About 10% of the desert are shifting dunes, the rest consists of solid dunes, and transitions from dunes to exposed rocks and salt pans . Most of the area is without vegetation. Areas that are overgrown are generally dominated by grasses and shrubs. In the northwest, a belt of thorn bushes surrounds the desert.

Overall, the Thar falls into the Indus plain, the surface is mainly uneven because of the dunes. The highest dunes are in the south, in the north they only reach 16 m. The Aravalli Mountains in the south-east represent a demarcation, which with its humid climate also prevents the desert from expanding towards the east and the Ganges Valley.

The soil of the arid zone is predominantly sandy, partly sandy-loamy. The consistency and depth depends on the respective topography. The flat-lying clay is heavier and can have hard pans made of clay , calcium carbonate, or plaster of paris. The pH of the soil is around 7 to 9.5. The fertility of the soil increases from west to east. Water is rare and occurs at a depth of 30 to 120 m.

The climate is characterized by extreme temperature fluctuations, between freezing point in winter and up to 50 ° C in summer. Severe night frosts can damage vegetation in winter. The annual rainfall is less than 150 mm in the west to about 350 mm in the east on the edge of the Aravalli Mountains. In general, precipitation varies in extent and occurrence. Almost all of the rain falls during the southwest monsoon in thunderstorms from July to September.

The situation is similar with the wind speed: While the wind blows around 3 km / h in winter, it is an average of 32 km / h in May and June. In summer there are usually sandstorms with speeds of up to 130 km / h, which can cover residential buildings with up to 7 cm of sand. The groundwater is difficult to reach and polluted with salt, so there are no oases here .

Because of the diverse landscape of dunes, hills and gravel plains, vegetation and animal life are quite rich for an arid area. There are 23 types of lizards and 25 types of snakes, and several of them are endemic .

Some species that are heavily pushed back in other parts of India can be found in the desert. So also the Hindu black horse ( Ardeotis nigriceps ), the stag goat antelope ( Antilope cervicapra ), the Indian gazelle ( Gazella bennettii ) and the Asian donkey ( Equus hemionus khur ) in the Rann of Kachchh .

It is remarkable how these animals can survive in such harsh conditions as high temperatures as well as lack of water and large vegetation. A key strategy is that they are smaller than similar animals in different conditions, and most are nocturnal.

The Bishnoi , a long-established people, are committed to protecting the animals in Rajasthan. The founder of the community believed to be reborn as a stag goat antelope.

The Desert National Park near Jaisalmer, which extends over an area of ​​just over 3000 km², is a good example of the Thar ecosystem with its fauna. In addition to the species mentioned above, Fenneks , Bengal foxes , wolves and the like can easily be found here. Sea shells and petrified tree stumps reflect the geological history of the desert in this park. The region is a haven for migratory and resident birds of the desert. You can see eagles , falcons , harriers , buzzards and vultures here. The Short-toed Eagle ( Circaetus gallicus ), the tawny eagle ( Aquila rapax ), spotted eagle ( Aquila clanga ) Luggerfalke ( Falco jugger ) are the most common of them.

The Tal Chhapar Conservation Area is a very small protected area in Churu , 210 km from Jaipur , and is the habitat of a large population of deer goat antelopes. You can also encounter desert foxes (fenneks) and wild cats here , as well as typical bird species such as partridges and flight fowl . 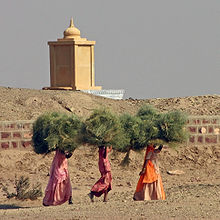 Women in the Thar near Jodhpur fetching food

The Indian desert is mostly inhabited by Hindus and by Muslim and Sikh minorities. The Cholistan is mainly inhabited by Sindhis and Kolhis . Many remains of the Indus cultures were found along the Ghaggar (or Hakra ) , the heyday of which took place between approx. 2600 and 1500 BC. Chr. Lay.

The original inhabitants of the Thar are nomadic cattle breeders who have been raising the noblest camels in India for generations; among their customers are primarily the Maharajas of India. Since 1986, water from the Punjab province has been carried into the desert via the 650 km long Indira-Gandhi Canal (formerly the Rajasthan Channel ) . The canal also allows for an improvement in agricultural use. The large-scale irrigation project resulted in a ten-fold increase in the population in this area, it is considered the desert area with the greatest population density worldwide. On the other hand, previously unknown malaria problems and wild boar infestations have arisen because of the canal . The standard of living of the mainly agricultural population is still very low. Fur and wool processing also play a major role.

The larger desert cities like Jodhpur , Jaisalmer , Bahawalpur and Haiderad are connected by railroad lines. Jodhpur, the largest city, is in a bushy region; Bikaner and Jaisalmer are right in the desert.

Although the desert was formed naturally, humans have a major impact on desertification . The trees were cut down for house building and used as fuel. In addition, there was overgrazing by the nomads, which resulted in the destruction of the grass cover and a decrease in the fertility of the soil. The precipitation can therefore penetrate even less into the soil and the groundwater level sinks even further. Here, too, the Bishnois are committed to the preservation of nature: they are not allowed to fell trees or injure greening plants, wear blue-colored clothing with the help of the indigo plant , or keep domesticated grazing animals such as sheep or goats.