This article covers the bird species. For other meanings, see falcon (disambiguation) and falcon .

The falcons ( Falco ), also known as real falcons , are a genus of the falcon-like family (Falconidae) with mostly long tails and pointed wings.

The falcons form a relatively uniform group. One of their characteristics is the hook-shaped downward curved upper beak, on the front part of which they have a point, the so-called falcon tooth . This shape supports the bite in the neck or in the back of the skull of the prey by which it is killed.

The eyes are relatively large, the iris is usually dark. As with the hawk-like , the fletching of the lower legs is usually extended to so-called "pants". A weak fletching extends over the heel joint.

Great Falcon with its face turned over its back

Falcons have 15 cervical vertebrae . A kestrel, for example, looking for prey from a vantage point, can turn its cervical spine by 180 °. Due to the position of his eyes, his field of vision is 220 ° without even having to turn his neck.

The genus is distributed almost worldwide and includes 39 species . In Central Europe there are five species of falcon as breeding birds: kestrel , red-footed falcon , tree falcon , peregrine falcon and saker falcon. The red chalk hawk was breeding in Styria until a few years ago , but can no longer be regarded as a Central European breeding bird. As a winter visitor from the north, the Merlin can often be seen in Central Europe .

Among the falcons there are obligatory migratory birds , but also resident birds . The tree falcon, which migrates from its breeding area to the Cape Province of South Africa, is one of the long-distance migrants . The kestrel, on the other hand, is a short-range migrant . Falcons are broad-fronted migrants that migrate across the board from Gibraltar to Arabia to Africa. In active rowing flight , they can also overcome larger areas of water.

Falcons don't build nests. Breeding takes place in nests of other bird species or in simple hollows on rock walls, buildings or on trees. This distinguishes them from the birds of prey .

Falcons are diurnal hunters. In contrast to eagles or buzzards , their anatomy is geared towards active flight and is not ideally suited for the use of updrafts . As a result, most species of hawks seek their prey in active flight or look for food from a perch. If this is discovered, it is also approached and tracked over long distances. Although the hunting technique of " shaking " is considered typical of falcons, only a few species hunt in this energy-intensive manner. In Central Europe, the kestrel is particularly known for its frequent shaking (hence its popular name Rüttelfalk ). Occasionally, red-footed falcons can be seen shaking flight. Shaking is particularly common in areas with few or no elevated seating.

The natural prey of falcons includes small mammals , birds , reptiles , amphibians and larger insects , depending on the size and the particular adaptation of the species . In contrast to hawks , eagles and harriers , the feet are only used to catch and hold the prey. In peregrine falcons , however, birds can be hit so hard with feet and claws after a dive that the force of the impact kills them.

The latest molecular genetic studies show that falcons are more closely related to parrots and passerines than to birds of prey. 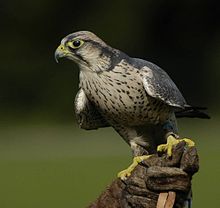 Falcon at a falconry demonstration

For many peoples, falcons play a role in mythology . In Egyptian mythology there are several falcon-shaped deities such as Horus (sky), Re (sun) and Chons (moon). In this context, the falcon has a special meaning as a symbol of the pharaoh .

In Nordic mythology , the goddess Freya wears a hawk robe, with which, depending on the reading, she can glide through the air like a hawk or even transform into one.

With the Celts , the falcon counted as a transmitter between this world and the hereafter.

In Slavic mythology , the falcon (Sokol) is a figure of the sun and light. He is known for his great courage, his keen eyes, and he can cover great distances in a very short time. That is why he is especially the bird of warriors. The heroes of Russian fairy tales like to turn into hawks to cope with difficult tasks.

Falcons have been used for pickling since ancient times because they are very good hunters. The gyrfalcon , the largest falcon species , is still valued for this form of hunting . In North America, the prairie falcon is mainly used because it is considered a particularly aggressive hunter.

The chivalrous and courtly society of the early European Middle Ages used the hawk hunt as part of their social life. The Middle High German courtly poetry took the image of the soaring falcon soaring in the air as a symbol for the so-called "hôhen muot", the basic attitude towards life of court chivalry.

In earlier times, however, pickling also contributed significantly to the endangerment of the falcons, as many of the birds used for this purpose were taken from nature. In Arab countries in particular, owning unusual falcons is still a status symbol. Pickling is subject to strict regulations in Germany and you need a hunting license ( hunter's examination ) and a falconer's license ( falconer's examination). Many German falconers nowadays volunteer to protect birds of prey, do public relations work, operate rescue stations or care for injured or orphaned animals. Without their commitment to breeding and reintroduction into the wild, the peregrine falcon would probably have died out in Germany.

The gyrfalcon is the largest known species of falcon.