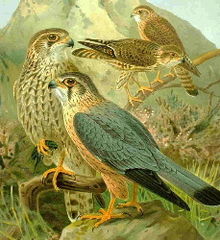 The Merlin ( Falco columbarius ) is a bird from the falcon-like family (Falconidae). Merline are compact and small, the males are the smallest falcons in Europe. The species inhabits open and semi-open landscapes in large parts of the northern Holarctic . North and northeast European breeding birds appear in Central Europe regularly as migrants in small numbers in autumn and spring and as winter guests in open landscapes of all kinds, as far as they are rich in small birds.

The German name Merlin is derived from the Dutch merlijn , dialect merlin , which is derived from the fall of the s - initials to landscape smerlijn , smerlin , or from the central French esmerillon . In contrast, the scenic heritage synonymous Schmerl , Schmirl , Schmerlin come from Middle High German smirle , via Old High German smerlo , smiril , in the sense of ' pygmy falcon'. The s has worn down in German usage over time. In the Icelandic or Faroese language it is still called smyrill or smyril . In Dutch, the West Flemish , Antwerp hereditary word smirrel , smierel has changed its meaning to ' dove ', because the top of the merlin resembles the gray-blue plumage of the male wood pigeon and their flight pattern .

The scientific species name columbarius actually indicates a bird that catches pigeons. However, the Merlin is too small for this. Carl von Linné first used this name for an American bird of prey, which was then transferred to the Merlin because of the same color.

The Merlin differs from the native kestrel in its more compact shape, shorter tail and more pointed wings . It is also significantly smaller. On average, the Merlin weighs just 190 grams.

With a body length of 25 to 30 centimeters and a wingspan of about 60 centimeters, the male is only slightly larger than a mistletoe . As a sex-dimorphic species, the plumage of the male differs from that of the female. The top of the body is slate gray. The neck is rusty red. The underside, on the other hand, is light isabel to rust-colored and has dark longitudinal spots. The gray tail has a black end band.

The female is significantly larger than the male and reaches a span of 67 centimeters. It is dark brown on the upper side of the body, while the underside is white with dark longitudinal spots. The tail is strongly banded dark.

In flight the Merlin is very similar to the much larger peregrine falcon .

Appearance of the nestlings

Young merlin birds are nestlings. Newly hatched nestlings have down on their head, body and thighs. Her first down dress is creamy white and still very thin and short. They change into their second down dress from around the age of eight. This is a little longer and coarser. On the top of the body it is light brown-gray while the underside of the body is pale gray. The down on the chin, throat and stomach is gray with white tips. Freshly hatched down chicks initially have a pink wax skin , which changes to light gray and yellow as they grow older. The beak is pale pink-blue when hatched and changes to black.

The distribution of the Merlin in Europe

It inhabits raised bogs, heaths, forest tundra and dwarf shrub areas and is also found in birch forests and on the treeless coasts. In Central Europe he is mostly a migrant. There is only suspicion of breeding in the Czech Republic. Merlins are more common in northern Germany in the first half of October.

The calls of the Merlin are rarely heard in Central Europe, as they are mostly silent in their winter quarters. The call series can be confused with those of the kestrel . If he is disturbed or attacked during the breeding season, a shrill, giggling kikikikikiki can be heard. If he hates birds of prey such as the buzzard , this changes to a jijijijijiji ... or a kek-kek-kek . The female calls a little faster and brighter than the male.

The Merlin prefers open, tree-poor landscapes as a habitat and hunting area. He mainly hunts small birds up to the size of a thrush. He hits them in the air in a steep thrust from above or in a stalking flight close to the ground. Similar to the sparrowhawk, its flight is very fast and agile. Unlike the sparrowhawk, however, it does not hunt in built-up areas. Small mammals, young birds not yet able to fly and larger insects complete the Merlin's menu, especially during the breeding season.

The prey is plucked from various elevations in the open area . As a rule, all swing feathers of the prey are removed. 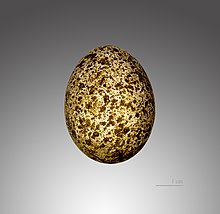 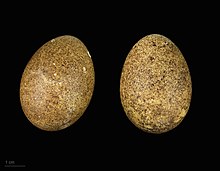 The nest is usually built on the ground. Occasionally, however, they also use ledges or old clumps of larger bird species. A full clutch usually consists of five to six eggs. Very large clutches also have seven eggs. They are short spindle-shaped to short-elliptical, have a smooth and lusterless color. Their basic color is pale beige with reddish brown speckles, which can be so dense that the beige basic color can no longer be recognized. The laying interval is about two days.

The clutch is incubated almost exclusively by the female. The incubation period is 28 to 32 days. The female takes on the brood before the clutch is complete. During this time, the male brings food close to the eyrie. After hatching, the nestlings are huddled intensely by the female. During this time, too, it is the male who brings the food. However, the female is responsible for feeding. The female only takes part in the care of the young birds a few days before the young birds leave. The young birds fledge with about 25 to 30 days of life. They initially remain near the eyrie and only become independent after a further six weeks.

The females of this falcon are usually able to reproduce at one year, males usually at the age of two. The birds have a seasonal marriage. A shallow hollow in the ground or a rocky slope can serve as a breeding ground, as can an old crow or magpie nest.