The reptiles or reptiles ( lat. Reptilis "creeping") are according to the traditional view a class of vertebrates at the transition from the "lower" ( anamnia ) to the "higher" vertebrates ( mammals and birds ). As such, according to modern understanding, they are not a natural group but a paraphyletic taxon because they do not contain all of the descendants of their last common ancestor . The classic taxon "Reptilia" is therefore rarely used in the zoological and palaeontological systematics. The taxon name only serves as an informal collective term for land vertebrates with similar morphology and physiology (see characteristics ). In this sense, 11,136 recent reptile species are currently differentiated.

As a monophyletic taxon , i.e. as a natural (complete) descent group, the reptiles should at least also contain the birds, and even mammals, taking into account certain extinct forms. The taxon Amniota , which was introduced in 1866 and is now defined as the clade , is used to depict these relationships.It includes all recent reptiles including mammals and birds as well as all descendants of their last common ancestor, which have now become extinct. The Sauropsida , introduced in 1864 and now also defined as clade, encompass all recent reptiles, including birds, as well as all extinct forms that are more closely related to today's reptiles and birds than to mammals (this clade is sometimes also called reptilia). In fact, all recent reptiles are more closely related to birds than to mammals; H. all "reptiles" of the line of development that lead to mammals are now extinct.

The scientific occupation with reptiles falls into the field of herpetology . The knowledge about their care and breeding in terrariums is called terraristics or terrarium science, which is part of vivaristics . 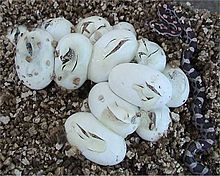 The most distinctive feature of recent reptiles is their dry, slimy body covering consisting of horn scales . They differ from birds and mammals in the lack of feathers or hair . In scale crawlers , the horn scales usually overlap like roof tiles, but they do not in turtles and crocodiles . A “real” moult (ecdysis), the periodic shedding of larger, coherent areas of the epidermis, occurs in principle only in scale creeps and is particularly pronounced in snakes .

Most of the reptiles living today have a typical lizard-like habit, that is, they have a long tail , walk on four legs ( Quadrupedie ), and move in a splayed gait. This is the original habitus of the terrestrial vertebrates, which was already present in the ancestors of the reptiles. All snakes and some lizards deviate from this primitive blueprint in that their legs and limb belts have receded and neck, torso and tail merge seamlessly into one another. Even with many extinct forms, the original reptilian habit has been modified. The dinosaurs moved to two-legged locomotion, the pterosaurs even developed wings and several groups adapted to life in the sea and converted their limbs into fins - the strongest adaptation was in the ichthyosaurs , which developed a fish-like habit, similar to the today's dolphins . Also relatively strongly derived reptiles are the turtles , in which the rib cage and the rump scaling form a kind of housing, especially in the tortoises , into which they can withdraw. The lizard-like habitus of the crocodiles is not inherited from their ancestors, but acquired secondarily. This shows u. a. Remember that when crocodiles run fast, unlike lizards, they do not twist their torso in the horizontal plane and put their legs under their bodies.

Unlike the amphibians are all reptiles, as well as birds and mammals, all her life Lungenatmer , that is, they have no aquatic, through gills breathing larval stage .

Most recent forms lay eggs ( oviparity ), only a few give birth to live young ( viviparity ) or are viviparous ( ovoviviparia ). In most scale reptiles, the eggs are covered with a parchment- like, flexible shell. The eggs of many turtles and all crocodiles, on the other hand, have a relatively firm lime shell. The degree of calcification is considered to be the degree of adaptation to fluctuating conditions with regard to the humidity of the environment in which the eggs are laid: the eggs with the most calcified shell are best protected against both water penetration and dehydration.

The recent reptiles are ectothermic and cold-blooded (poikilothermic) animals that regulate their body temperature as much as possible through behavior (e.g. sunbathing ). Furthermore, the blood circulation of all recent reptiles does not have a complete separation of the lung and body circulation. In most forms, this is achieved by a non-continuous cardiac septum . Crocodiles, on the other hand, have a closed heart septum and blood exchange takes place in the aortic trunk via an opening in the partition between the left and right aorta ( Panizzae foramen ). 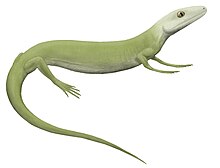 Live reconstruction of Protorothyris , a lizard-like basal reptile from the early Permian of Texas.

Dinosaurs are arguably the most popular extinct reptiles.

The phylogenetically first reptiles are at the same time also the earliest amniotes in phylogeny or are the earliest amniotes entirely reptile-like forms. They are first recorded in fossil form from the early Upper Carboniferous , around 315 million years ago . All amniotes and thus also all reptiles come from original land vertebrates (“amphibians” in the broader sense). In contrast to reptiles, these amphibians did not reproduce via an amniotic egg , a kind of autonomous survival capsule that supplies the developing embryo or fetus with nutrients and protects it from dehydration. The amniotes, in contrast to the amphibians, are therefore not dependent on water for reproduction and are therefore generally better adapted to dry habitats. With the modern amphibians , at least one line of the original terrestrial vertebrates has survived to this day, but these are mainly specialized in moist habitats and cannot be compared with the immediate ancestors of the amniotes or reptiles, who must have been relatively independent of water (see →  Reptiliomorpha ).

While the skeletal remains of the first “real” reptile Hylonomus have been handed down in a fossil tropical wet forest (“coal forest”), trace fossils of about the same age (approx. 315 million years) show the existence of early amniotes in an at least seasonally arid environment in which the amniotic egg very likely meant a reproductive benefit.

The Amniota were already divided into two main lines in the Upper Carboniferous: One line, called Synapsida (see systematics ), led to the mammals and the other, called Sauropsida , led to the recent reptiles and birds. In the traditional palaeontological understanding, the early representatives of the synapsid line (" pelycosaurs " and early therapsids ) are counted among the reptiles.

Consequently, most post-Permian and all recent reptiles (as well as birds) are representatives of the Eureptilia. Almost all eureptiles and all recent representatives belong to a large group called Diapsida (see systematics ). Their earliest representatives appear in the Upper Carboniferous, but they only blossomed in the Mesozoic , which earned this geological era the nickname "Age of Reptiles". At this time a development took place within a group of land-living diapsids, in the course of which these forms lost more and more characteristics that are now regarded as typically reptilian. They develop a separation of the lung and body circulation, become endothermic and cover their skin with insulating material in order to be able to hold the self-generated body heat better. This group, whose roots are in the Permian, are called Archosaurs (Archosauria). They include the two best-known country groups reptile of the Mesozoic: Dinosaurs (Dinosauria) and pterosaurs (Pterosauria). While the dinosaurs in the traditional understanding are once again a paraphyletic group with exclusively reptilian representatives and thus completely extinct, according to the modern view they include the birds as a monophyletic taxon, the current endpoint of the described “de-reptilization trend”. A similar development already took place in the Permian and Triassic with the synapsids and ultimately led to the mammals. In the line of development of the crocodiles, another line of archosaurs, this trend is reversed and their representatives are increasingly reptilian again compared to their ancestors (see →  Crocodylomorpha ).

The archosaurs facing the lepidosauria (Lepidosauria) connected to the Tuataras , lizards , lizards , gecko , chameleon , snakes , etc. encompass by far the largest part of the recent reptiles. Although they have many "primitive" features, that is to say those which are now regarded as typical of the reptilians, most of the recent lepidosaur groups are relatively young in their tribal history and appear in the Cretaceous at the earliest .

The systematic position of the turtles (Testudinata) was unclear for a long time : Their skulls have no temporal windows, which is why this group is traditionally assigned to the anapsids (see systematics ). In the meantime, however, the view is increasingly gaining ground that the turtles are descendants of diapsid reptiles who have closed their temple openings secondarily. Within the Diapsids, a closer relationship with the archosaurs as well as a closer relationship with the scaled crawfish is discussed. The oldest known turtle fossils from the Upper Triassic do not allow any clarification. 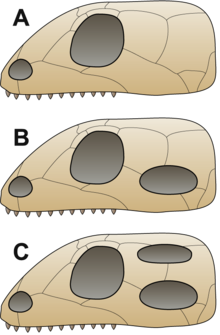 According to the number of temporal windows, the reptiles are classically divided into three systematic groups: A  Anapsida, B  Synapsida, C  Diapsida.

According to the characteristic number and location of openings in the rear part of the roof of the skull, the temple or temporal windows , three major groups are classically differentiated within the Reptilia:

Range of reptiles in the traditional understanding (green area), shown in a cladogram . It should be noted that, at least in the traditional paleontological system, the extinct early representatives of the line to which the mammals belong (Synapsida) are also considered reptiles.

In the following, the systematics of recent reptiles is shown according to the classical understanding.

A more detailed and up-to-date system, which also takes families and extinct groups into account, can be found under Systematics of Reptiles . The European species are included in the list of European reptiles .