The title of this article is ambiguous. Further meanings are listed under spring (disambiguation) .

Feather dress is a redirect to this article. See also: feather robe . 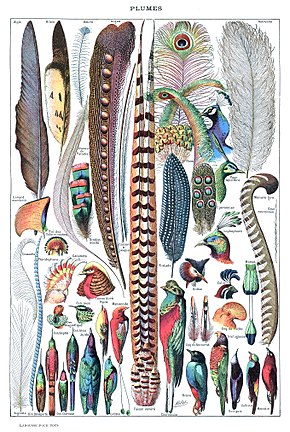 Springs ( latin pennae , singular Penna ) are from the outer skin of the birds (and fossil feathered dinosaur formed), in the finished state inanimate structures from keratin , together as feathers or plumage form the main outer surface. The branch of science that deals with feathers is called plumology .

Feathers protect the birds on the one hand from water and cold and on the other hand they provide them with colors that serve both as camouflage against enemies and as a means of visual communication . In addition, there is the firm contour that they give the bird and the support of flight ability . Although a single feather is extremely light in weight, a bird's plumage weighs about twice as much as its skeleton .

The altgerm. Noun mhd. Veder [e] , ahd. Fedara is based on the idg. Root pet- "to fall down on something, shoot, fly". 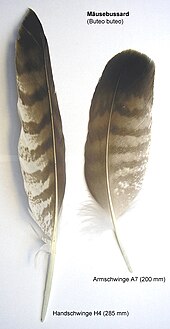 Wing feathers of the common buzzard

There are two basic types of springs that differ in construction. These are firstly the contour feathers , comprising the exterior of the body, on the other hand located under the coverts lower springs (also down or dunes), which act as a heat-insulating layer. The cover feathers protect the down feathers from moisture.

The contour feathers ( Pennae conturae ) are functionally further divided into:

The down or down ( plumae ) form the undergarment. Some birds (e.g. ratites ) do not have them.

The nestling down , the plumage of the young birds, is not real down, but modified contour feathers. They also protect against the cold.

In addition to these two basic types, there are also various special springs: 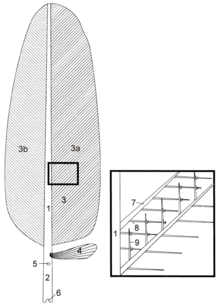 Feather branches ( barbae or rami ) extend from the spring shaft ( rachis ) to the front and back , from which again arc rays ( barbulae proximales ) and hook rays ( barbulae distales ) arise. There are fine hooks on the hook rays, which interlock with the arc rays of the neighboring spring branch and thus create the necessary rigidity and strength of the spring vane.

The down (or dunes ) have a short shank and hook sheet and beams (Dunenäste or Dunenstrahlen) which are not entangled with each other so as to form no spring flag. The special feathers only have a shaft and a tuft of short, non-toothed branches.

Plumage of a griffon vulture

The totality of the springs as feathers or feathers called.

Distribution of feathers on the body

The feathers are not evenly distributed on the body. They overlap in such a closed manner that this is not visible from the outside. A distinction is made between:

An exception are e.g. B. penguins , in which the body is evenly covered with feathers.

The young of some families of the birds hatch naked, e.g. B. in bee-eaters , kingfishers , cuckoo birds , rackets , woodpeckers and sailors . The young of the other families are covered with dunes when they hatch . These nestling downs are not real down, but modified contour feathers. The Dunenkleid is at nest stools mostly monochrome and less dense than precocial birds , which are significantly stronger Camouflage and isolation function.

The contour feathers growing from the same papillae push the downs out. The juvenile or youth dress follows the dune dress. This is replaced with the first moult by the adult dress or other youth clothing such. B. with sea ​​eagles or larger seagulls . Downy and juvenile plumage often differ significantly in color from the plumage of adult birds.

With the start of the breeding season, males of some bird species with a seasonal dimorphism change into a strikingly colored splendor (also breeding or summer dress). It is used to advertise partners and to delimit the territory. After the end of the mating season, they then change to a more inconspicuous, plain dress (also resting or winter dress), which offers better camouflage and thus better protection against predators .

Plumage of the blue peacock

The color of the feathers is mainly caused by the brown to black pigment melanin . Other pigments are carotenoids and porphyrins . The interaction of the light absorption of these pigments with the light-reflecting air deposits in the feathers creates a wide variety of colors. The often shimmering effect is based on interferences in the regular fine structures of the feather (see structure colors ).

The color can also be changed by wearing the colored nibs and applying a dye. In this way, the body's own, brownish secretion from the root gland can be applied. The orange color of the adult dress of the bearded vulture is caused by bathing in iron-containing mud.

A special phenomenon is the pink to red coloration of the naturally white feathered flamingos . The pink color of the plumage is due to the ingestion of carotenoids with food. These are mainly found in planktonic algae . The flamingo organism can convert these carotenoids with the help of enzymes in the liver ; this creates several pigments , especially canthaxanthin , which is stored in the skin and feathers of adult flamingos. Young birds have gray plumage with little or no pink pigments. The often unnatural diet of zoo flamingos means that they have more white plumage there.

Development of the bird feather

Feather structure of a yellow and breasted macaw

Spring systems are developed from around the 5th day of life (in the egg). Cones grow out of the epidermis and later sink into the skin to form follicles or bellows . When these are ready, they consist of a central cone, the papilla, which is enveloped by epidermis. The cell divisions from which the spring emerges take place at the base of the follicle, the formation zone (epidermal collar). This means that the most differentiated parts of the growing feather are at the distal end (top). The uppermost cell layer of the epidermis divides outwards and becomes keratinized, ie the cells keratinize and die. This creates a protective covering around the papilla, the spring sheath . This is initially closed distally, the spring branches are still in it at this point in time. The spring is formed in the typical form with a shaft and the side branches, although the side branches are first formed in a spiral at the edge of the formation zone and these then merge centrally to form the shaft. The feather sheath also protects the lower part of the rachis with side branches and the well-perfused formation zone. The feather sheath is also known as a blood quill , as blood leaks out in the event of injuries as long as the feather has not finished growing.

The genetic control of the development of the feathers is carried out by two genes , which generally act as signal transmitters for the growth of limbs, fingers and skin structures in vertebrates. These are the genes Shh (Sonic hedgehog) and Bmp2 (bone morphogenetic protein 2) as well as the associated proteins . Shh stimulates the cell division of the keratinocytes , while Bmp2 controls the differentiation of the cells and takes over the regulation of growth. The distribution of the concentration of the two proteins also defines the top and bottom of the feather.

Feathers are regularly renewed during the moulting period . During the moult, new feathers grow from the same follicles from which the old ones fell out. The same education zone is active again.

Evolution of the bird feather 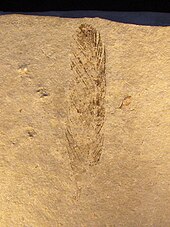 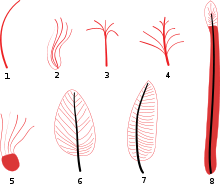 The widespread view that feathers are a further development of reptile horn scales has been revised by the findings of recent years. Today we know that the feather, like the hair coat of mammals , is an independent development that is not homologous with the scales of reptiles .

The evolution of the bird's feather probably took place in several steps. Fossil feathers do not provide any information about this, however, as the few fossil evidence of feathers already show very well developed bird feathers. For example, the ancient bird Archeopteryx from the late Upper Jurassic ( Tithonium , approx. 150.8 to 145.5 mya ) already had cover feathers that correspond to those of today's birds. In particular, the feathers that do not lie on the body axis are asymmetrically shaped, which benefits aerodynamics (and therefore, conversely, indicates the animal's ability to fly).

Nevertheless, it can be assumed that such a complex structure could not have been created in one step. The fossil record of feathered dinosaurs , such as B. Caudipteryx or Sinornithosaurus show differently developed precursors (proto-feathers) and thus confirm this theory. According to Richard O. Prum and Alan H. Brush, the bird's feather was created in the course of evolution over several steps:

In contrast to this theory, feathers were found in French amber in which secondary rays branch off from a central shaft to two sides, which are not connected to one another by hook and arc rays. The shaft of the spring consists of secondary rays that are still incompletely fused together.

Josef H. Reichholf takes the view that the feathers were originally a waste product of the metabolism - the body of the animals would have excreted superfluous or even poisonous sulfur-containing compounds in this way.

Feathers in Mythology and Customs 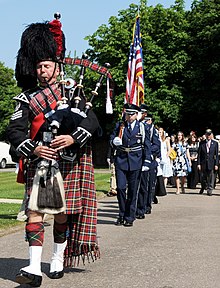 Feathers as ornament on a military headgear

Feathers have long been used to fill pillows , jackets, etc. In the past in particular, feathers were also used as decorative jewelry , for example for hats (see feather jewelry ). Quills used to be used as writing implements.

Feathers were and are used to fletch arrows .

Research carried out in April 2009 by the University of Genoa shows that springs are suitable for significantly reducing the air and water resistance of aircraft and underwater vehicles. Such vehicles could be operated much more efficiently covered with springs. The Italian scientist Alessandro Bottaro and his colleagues investigated the function of the inconspicuous cover feathers of birds' wings. They found that when the birds glided, some of the feathers protruded from the wing at certain angles, causing the airflow to vibrate. To investigate the effects, the researchers covered a cylindrical object (20 cm in diameter) with synthetic cover feathers and tested it in a wind tunnel . The result was a 15% reduction in air resistance.