This article describes the bird family. For all other meanings of the term, see woodpecker . 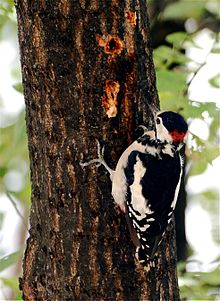 The woodpeckers (Picidae) are a species-rich family from the order of the woodpecker birds (Piciformes) in the bird system . This bird family contains 28 genera and more than 200 species .

In addition to the real woodpeckers (subfamily Picinae), the subfamily dwarf woodpeckers ( Picumninae) and the species-poor subfamily of reversible necks (Jynginae) also belong to it.

The wings are of medium length and slightly rounded. The tail of the real woodpecker is wedge-shaped with stiff, pointed control feathers. It serves as a support when they climb tree trunks.

Dead young green woodpecker lying on its back, the feet with the paired toes are easy to see

The short feet usually have paired toes with strong claws, two of which point forward and two point backward. Some types, e.g. B. the three- toed woodpecker ( Picoides tridactylus ) only have three toes, two pointing forward and one pointing backwards.

The woodpeckers are distributed almost worldwide. On the one hand, they are absent in areas that lack tree populations, such as tundras , desert and steppe regions , on the other hand there are also land masses with forests that lack woodpeckers. These include Australia , New Guinea , New Zealand , Madagascar and the Pacific Islands.

With over 100 species, the family is most richly developed in South and Central America . The subfamily of the dwarf woodpecker occurs only in the tropics of America , Africa and Asia . Reversible necks are only found in the Old World .

Woodpeckers usually live individually or in pairs in forests , tree plantings and gardens . Only in exceptional cases do they unite to form larger groups outside of the breeding season. The woodpeckers move almost exclusively by climbing, hop awkwardly on the ground and do not like to fly long distances.

A peculiarity of the woodpeckers is that they knock with their beak against tree trunks with considerable effort and persistence and thereby chop the wood in order to find food, to "make nesting holes", to mark their territory or to attract sexual partners. These activities are also called chiselling (machining) and drumming (courtship behavior). The helmeted woodpecker ( Dryocopus pileatus ) has been reported to strike its beak against wood up to 12,000 times a day, and it is astonishing that its brain is not damaged by these strikes. A woodpecker can strike up to 20 strokes per second, and according to a report in the October 2006 journal Nature , each stroke is comparable to a beak hitting a wall at 25 km / h, with a delay of up to 1200 g effective - a delay several hundred times greater than that of astronauts when landing from space.

Nature also referred to several scientific publications in which it was explained why woodpeckers do not get headaches despite these stresses. On the one hand, the woodpecker's brain is surrounded by a particularly small amount of cerebrospinal fluid : Their brain sits relatively rigidly in the skull and is not thrown from the inside against the skull by the shock waves generated when knocking, which prevents a concussion . The skull is also surrounded by strikingly strong muscles that act as shock absorbers : like a boxer who sees a punch approaching, these muscles are tensed shortly before the impact against the wood and thus absorb a large part of the energy. In addition, the tapping movement is carried out in an extremely straight line, as it were from the shoulder . As a result, the neck and head remain rigid to one another, and any horizontal or vertical rotation of the head is avoided, so that only low shear forces can act. After all, a woodpecker closes its eyes a millisecond before the impact, thus protecting them from flying wood chips.

Woodpecker on the tit dumpling

Most species feed on insects that they find in or under the tree bark or bark or in rotten wood . To do this, they climb up the trees and look for hollow spots by tapping the trunks with their beak.

Some species, such as the wryneck ( Jynx torquilla ) or the green woodpecker ( Picus viridis ), mainly live on ants and their pupae , which they look for on the ground. In some species, especially the American sap litter ( Sphyrapicus ), tree saps make up a larger part of the food that they make themselves flow by curling the trunks with their beak. Some species also eat fruits and seeds from plants , buds and mushrooms and build storage chambers themselves.

Great spotted woodpeckers press z. B. hazelnuts or pine cones in tree cracks (which they sometimes even create themselves beforehand by chiseling a corresponding notch in the trunk or a branch) in order to then knock open the objects fixed in this way with their beak, which in turn other birds, for example magpies , to get the contents of the nut after driving away the great spotted woodpecker. Occasionally they also make use of tit dumplings .

The woodpeckers are cave breeders . The breeding caves are usually built by the real woodpeckers (Picidae) themselves in tree trunks. They are only lined with a few shavings. The woodpeckers lay three to eight white eggs , which are hatched by both sexes. The nestlings are then immediately supplied with food. The young birds are also known as nestlings, which means that they stay in their mother's nest for some time. When they are fully fledged, they are driven out of the nest hole by the adult birds.

Woodpeckers also use thermal insulation composite systems on buildings to create breeding caves. This creates what is known as woodpecker damage .