Wings of a red-tailed buzzard

Wings are movement organs used for flying in birds , which are created by reshaping the front limbs . When flying , they generate lift and propulsion.

The wings of the birds are transformed front extremities, the wing skeleton therefore, like the front extremities of other terrestrial vertebrates, consists of an upper arm bone ( humerus ), the forearm bone ulna ( ulna ) and spoke ( radius ) and the hand bone . In adapting to the changed function of flight, these bones have changed significantly.

When the wing is in place, the usually strongly developed humerus is positioned horizontally. The ulna is stronger than the radius and serves as the insertion point for the arm swing . The ulna is anterior to the radius , both bones are parallel to the humerus with the wing attached .

The bones of the hand have experienced the greatest changes.

The number of fingers is reduced to three:

The wings 1 to 6, counted from the inside out, start at the carpometacarpus , the wings 7 to 10 at the two finger bones of the digitus major .

The wing feathers are the largest feathers on the wing and are divided into hand wings and arm wings depending on where they are inserted . A band of connective tissue holds them in place. They interlock like roof tiles. The two feather vanes are unevenly wide, so that the draft leads to the fact that the feathers turn upwards when thrown so that the air can pass between the flight feathers. When the wing flaps down again, they turn back and form a closed surface. The flight feathers are usually greatly reduced in flightless birds .

The flight feathers are covered by several rows of smaller covers at the bases , so that a complete closure of the wing is created.

The small feathers on the leading edge of the wing, carried by the thumb, are called the thumb wing or alula and are used for steering and braking at high airspeeds.

Seen from above, the folded wings are largely covered by the umbrella feathers . 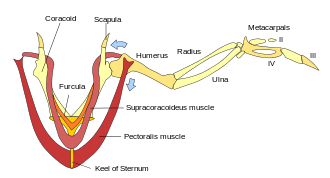 About 50 different muscles contribute to the movements of the wings. The two largest of these are called pectoral muscles and attach to the sternum crest ( crista sterni ). The pectoralis major muscle or pectoralis superficialis muscle lies superficially . When it contracts, the wing is pulled down and rotated forward and down. It is the bird's largest muscle.

The small pectoral muscle ( pectoralis minor , pectoralis profundus or supracoracoid muscle ) lies below the surface directly above the ribs and runs from the sternum through the three-bone hole ( foramen triosseum ) to the top of the upper arm bone ( humerus ). The three-bone hole lies between three bones of the shoulder joint, i.e. between the raven bone ( coracoid ), the shoulder blade ( scapula ) and the fork bone ( furcula ). When the pectoralis minor contracts, it lifts the wing.

There are many smaller muscles on the wing itself that control the exact position of the wing. The rhomboideus muscle pulls the wing forward, latissimus dorsi muscle pulls the wing backwards. The biceps brachii and triceps brachii muscles pull the wings forward and backward. Extensor carpi and flexor carpi muscles stretch and bend the wrist. The fingers are stretched and flexed by the extensor digiti and flexor digiti muscles. Other muscles move the individual fingers.

With the help of the springs, a streamlined profile (see wing ) is created. In gliding flight (no active wing flapping) there is a slight overpressure on the underside and a strong negative pressure on the top, which pulls the wing and thus the bird upwards. A technical implementation of the bird flight takes place in the ornithopter .