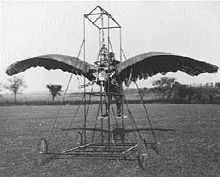 An ornithopter , even swing plane , Schwingenflügler or Schwingflügler is an aircraft that in flapping flight flying. Such a swing arm aircraft generates its propulsion by moving the wings . The ornithopter has so far only gained importance in the field of experimental and model flight . In the early days of manned aviation, flight tests were carried out using this principle. So far, no human has ever been able to fly by flapping their wings alone (see muscle power aircraft ), nor has there ever been a functioning person-carrying motorized ornithopter.

Around 500 years ago, Leonardo da Vinci researched how birds fly. He drew the first traditional draft of an ornithopter.

The Frenchman Gustave Trouvé demonstrated the first successful ornithopter models in front of the French Academy of Sciences in 1870. Other attempts were made by his compatriots Alphonse Pénaud , Hureau de Villeneuve and Victor Tatin .

Lawrence Hargrave built various ornithopters around 1890 , powered by steam and compressed air. He combined small flapping wings with a larger rigid wing. Otto Lilienthal pursued the same principle after the realization of gliding to further develop his flight performance. To do this, he tried out light carbon dioxide engines . The free-flying bird models by the German biologist Erich von Holst , built in the 1940s, also became very famous .

In order to get an ornithopter to fly, it is necessary to realize complex movement sequences. The operating principle is a coupled impact, rotary and longitudinal movement. In the ornithopter, lift and propulsion are generated by the up and down of the wings . The so-called hand area of ​​the wing is of particular importance: the hand areas are turned with the front edge facing downwards on the downstroke, on the upstroke the front edge of the hand area points upwards. So the hand area of ​​the wing has a function similar to a propeller . The additional application of the wings on upstroke shortens the lever arm and also minimizes the swinging of the fuselage.

In addition to the active wing movement, the elastic properties of the wing contribute to the effectiveness of the propulsion.

The Technical University of Delft is researching small ornithopters with cameras in the DelFly program .

The company Festo presented at the Hannover Messe 2011 with the SmartBird a flight mechanics of Herring adaptierendes free-flying model with a wingspan of two meters in front. The BionicOpter followed in 2013 , a development of an aircraft based on the wing beat of the dragonfly .

At the end of 2013, mathematicians from New York University presented an ultra-light model aircraft that mimics the movement of jellyfish . The device works without regulation and aerodynamic stabilization, but actually does not belong to the ornithopters, as it neither uses the (bird) wing beat nor generates dynamic lift.