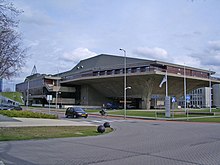 Auditorium of the TU Delft

Nuclear reactor at the TU Delft

Around 3,100 academic employees, including 253 professors, work at the university and more than 23,000 students study, almost 20 percent of whom come from abroad. What is striking about these numbers (but typical for a technical university) is the unequal gender ratio: around 27 percent of students and around 25 percent of academic staff are women; in the case of non-academic staff, this proportion is only slightly less than half. The university is divided into eight faculties, one of which is partly operated jointly with the University of Leiden . The TU Delft is one of the most renowned universities in the Netherlands and is a member of the European university association IDEA League . In the QS World University Rankings 2019, the university ranks 52nd in a global comparison, while it ranks 22nd in the field of engineering and third in the field of architecture.

The university consists of a total of eight faculties :

The building of the Faculty of Architecture was completely destroyed by fire on the morning of May 13, 2008 after a short circuit in a coffee machine. The Minister for Education, Culture and Science Ronald Plasterk described the fire as "the greatest disaster that universities in the Netherlands have ever experienced"

General information about the Faculty of Aerospace Technology

The faculty is one of the largest faculties at the TU Delft and one of the largest faculties in north-western Europe , dealing exclusively with aerospace engineering. It is also the only institute in the Netherlands that conducts research and education in aerospace engineering. Today, the Faculty has about 2,300 Bachelor - and Master - students , 237 academic staff and 181 doctoral students. About a third of the students studying in the faculty are international students.

The faculty is currently doing research in the following areas: novel materials, particle image velocimetry , the CubeSat and many others. The ten chairs are part of the following four different areas:

Extensive laboratories and test facilities are used for research and teaching. The faculty has wind tunnels for super- , hypersonic and subsonic speeds , a highly sensitive navigation simulator and a material test laboratory. This equipment enables the faculty to carry out experiments in the areas of human-machine interaction, air traffic control , lightweight construction , materials, aerodynamics , simulation and navigation . The faculty owns and uses a Cessna Citation - jet aircraft as a flying classroom. The citation is used for research and teaching. Since the interior of the aircraft can be changed, one can easily switch from a research configuration to a teaching configuration for students. The Simona, the flight simulator, is one of the most unique pieces of equipment in the aerospace engineering faculty. The simulator can be programmed to simulate any aircraft, but also to mimic new characteristics from new designs. This allows the behavior of the aircraft to be simulated extremely realistically. The simulator is used for research and also for master's theses.

The faculty is a member of the Partnership of a European Group of Aeronautics and Space Universities , the European network of aerospace technology universities. She also takes part in the Erasmus program and the IDEA League , a merger with the universities of ETH Zurich , RWTH Aachen and Chalmers University .

The solar car Nuna 5 at the World Solar Challenge 2009

TU Delft receives special attention from its numerous student teams, who regularly achieve top placements in international technology competitions. So that won Hyperloop team in 2017 the main prize of by Elon Musk proclaimed SpaceX Hyperloop Pod Competition in California, even if the team of Technical University of Munich reached a higher speed. At the World Solar Challenge , which takes place every two years in Australia , the Delft team has won the race in the Challenger class seven times with its solar vehicle since 2001 and also holds the course record. Other teams are developing, among other things, a solar boat , a hydrogen-powered car and an exoskeleton for people with disabilities. The university is currently providing workshop space in the so-called D: Dream Hall to the 13 teams .

The TU Delft has steadily improved in the international QS World University Ranking since 2010. At that time it was still in 108th place, in 2019 it reached 52nd place in the overall ranking. Looking only at the Engineering and Technology category , the university has been relatively stable between 15th and 20th place for years; In 2018 she reached 22nd place in this category. That makes it the best university in the Netherlands in this ranking. In the ranking of the Times Higher Education , the TU Delft reached the 58th place in 2019 and was therefore on a par with the University of Wageningen, also in the Netherlands . In the Shanghai ranking , the TU Delft is between ranks 150 and 200 and was therefore only the ninth-best university in the country in 2018.

The Technical University of Delft has partnerships with the following European universities, among others:

TU Delft is also a founding member of the Open Education Consortium , many courses are online as OpenCourseWare .