The Imperial College London (full name: The Imperial College of Science, Technology and Medicine ) is a corporation founded in 1907 Institute of Technology and University in London . It is one of the most research-intensive and renowned universities in the world. Graduates and faculty include 15  Nobel Prize winners , 3  Fields Medalists , 74 Fellows from the Royal Society and 84 Fellows from the Royal Academy of Engineering .

The university regularly achieves top positions in various ratings for academic institutions; in the QS World University Ranking 2014/15 it was ranked 1st in the United Kingdom and 2nd in a global comparison, both on a par with the University of Cambridge . There are three faculties : engineering, science and medicine, complemented by a business school , the Imperial College Business School. It is also one of the six Golden Triangle universities . Alice Gast is the president. 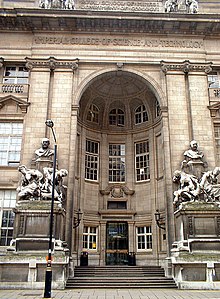 It was founded in 1907 through a merger of the City and Guilds College , the Royal School of Mines and the Royal College of Science .

At the end of the last century, the medical faculties of St Mary's Hospital (1988), the National Heart and Lung Institute (1995) and the medical faculties of Charing Cross and Westminster (1997) merged to form the Imperial College School of Medicine . On August 1, 2000, Wye College and the Kennedy Institute of Rheumatology merged with the college. The Kennedy Institute became a section of the medical school and Wye College is now known as the Imperial College Wye Campus.

The traditional graduation ceremony of all Imperial students of a year takes place in the Royal Albert Hall .

Imperial College is one of the supporting organizations of the Francis Crick Institute .

In the Financial Times Rankings, the Faculty of Economics (Imperial College Business School) ranks 18th in the European Business Schools category. The MSc in Management Program achieved 1st place in Great Britain in the 2011 Financial Times Management Ranking and is ranked 13th worldwide. In the FT MBA Ranking, ICBS is ranked 37th and 4th in the Entrepreneurship specialization. The MSc in Finance Program ranks 8th in the 2011 FT Rankings worldwide . ICBS came 14th in the Bloomberg Businessweek Rankings for European Business Schools.

According to the British Research Assessment Excercise (2008), which is carried out every 5 years and decides on the allocation of financial contributions from public institutions to universities, 73% of the publications at Imperial College London were rated as `` world leaders '' (4 *) or `` excellent '' internationally '(3 *) classified. This is the highest proportion of multi-faculty universities in any of the UK.

The Queen's Tower in the center of the South Kensington campus

Imperial's main campus is located in the posh London borough of South Kensington, in an area known as the Albertopolis because of its high density of cultural and academic institutions . The Natural History Museum , Science Museum , Victoria and Albert Museum , Royal College of Music , Royal College of Art and the world-famous Royal Albert Hall are all in the vicinity . The South Kensington campus is just 100 meters from Hyde Park . Practically every building can be reached via the Main Walkway, the central path through the densely populated campus. The junior or senior common room (comparable to a cafeteria for undergraduates or postgraduates and employees) and various shops are also located here.

Other university campuses are in Silwood Park (near Ascot ) and in Wye (near Ashford in Kent ). 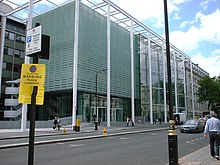 A donation of around 40 million euros by alumnus Gary Tanaka in 2000 enabled the construction of a new building for the Management School, now known as the Imperial College Business School . Like the new building for life sciences and the central administration building, it was designed by the architect Norman Foster . The business school is now regarded as the imposing main entrance to the South Kensington campus; it was opened in 2004 by Queen Elizabeth II .

In 2014, the then Mayor of London, Boris Johnson , approved the expansion of Imperial College to include White City. Funds worth over a billion euros were spent on the construction of the West Imperial, which has already been partially opened. Another donation of around 45 million euros from alumnus Michael Uren enables the establishment of a bio center on the new campus.

The Imperial is divided into three faculties and five departments.

In 2006 the World Memory Championship took place at Imperial College .