The university's 31 colleges are independent institutions , separate from the university itself, and enjoy considerable autonomy. The colleges decide which students to accept and are responsible for care, accommodation and learning in small groups (so-called supervision ). Admission to college remains a requirement for admission to the university. Lectures, lectures and research, on the other hand, are organized at the university, i. That is, they take place in the faculties and institutes . They continue to appoint their own fellows (lecturers and lecturers). Many colleges are also quite wealthy, which is less the case for the university itself. In Cambridge, the term “the university” is commonly used when not referring to the colleges.

Admission to Cambridge was dependent on proficiency in Latin and Greek - languages taught primarily in private schools - until the 1960s , which largely restricted access to members of the upper social class. Attitudes have changed since then; the application process is now based on different principles. Very good to best grades are expected from applicants for the first degree. British applicants need very good results in their A-Levels , German applicants very good grades in relevant subjects and the ability to persuade college fellows about their academic abilities during the interview.

The first college was Peterhouse , founded in 1284 by Hugh von Balsham , Bishop of Ely . The second oldest college is King's Hall , which was founded in 1317, although it no longer exists as a separate college as it was merged with Michaelhouse to form Trinity College in 1546 by Henry VIII . Many other colleges were founded in the 14th and 15th centuries. The youngest college is Robinson College , which was built in the late 1970s.

Johann Lair , born in Sieglar in 1476 (today Troisdorf- Sieglar), died in Siegburg in 1554 , also called John Siberch (derived from his place of residence in Siegburg), founded the university printing house in Cambridge in 1520. In 1521 he received his first print job: Oratio , the speech that Dr. Henry Bullock on the occasion of Cardinal Thomas Wolsey's visit to Cambridge. On this occasion there was an imprint in a book printing for the first time : “ Impressa per me Ioannem Siberch ”.

Since 2006, part of University of Cambridge to the University network International Alliance of Research Universities in. The Cambridge Glacier in Antarctica is named after the university.

In 2010 and 2011, the university ranked first in both the QS World University Rankings and in the US News & World Report rankings , while in 2011 it was ranked 6th in the Times Ranking and in the Academic Ranking of World Universities at Jiaotong University Shanghai landed in 5th place worldwide and thus 1st place in Europe.

In 2009, World Brand Lab Cambridge's marketing consultants ranked as the fifty most influential brand in the world and the 4th most influential of all universities behind Harvard , MIT and Stanford . In 2011, Cambridge ranked third after Harvard and MIT in the Times Higher Education World Reputation Rankings , which attempt to assess the academic reputation of universities in general through surveys of researchers and professors in all disciplines.

In national rankings, Cambridge always fights with Oxford for a place at the top of the table. In 2012, the University of Cambridge won three of the four most important national rankings, namely The Independent , The Guardian and The Sunday Times , while it came second in the Times Ranking .

Cambridge also took first place in the 2001 and 2008 Research Assessment Exercises conducted by the UK's four funding bodies for higher education , which aim to assess the scientific merit of research at all public universities 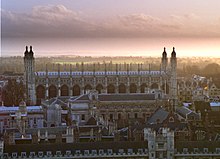 The colleges are self-governing institutions and an integral part of the university, with their own facilities and property. They are particularly important for the university in the accommodation of students, in matters of the common good, at social events and in teaching for students without a degree.