River Thames is a redirect to this article. For further meanings see Thames . 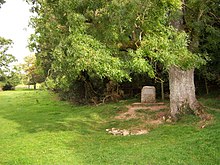 The Thames in London, seen from Jubilee Bridge: on the left the London Eye ferris wheel , Westminster Bridge in the center of the picture, the Palace of Westminster (seat of the British Parliament ) and the Elizabeth Tower (with 'Big Ben' bell).

Morning mood on the Thames in London, photographed from Tower Bridge.
Moored in the middle: the HMS Belfast , a floating museum of the Royal Navy. 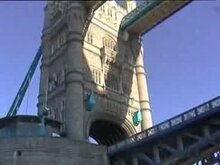 The Thames ( English River Thames [ tɛmz ]; in antiquity, Latin Tamesis , in Tacitus also Latin Tamesa or ancient Greek Τάμεσα Támesa for the Greek geographers) is a river flowing through southern England that connects London with the North Sea (estuary). After the Severn , the Thames is the second longest river in Great Britain at 346 km .

Despite its popularity and its length, the Thames is usually not counted among the major European rivers . The mean discharge in Kingston upon Thames is 66 m³ / s, which is less than, for example, the water flow of the Ruhr or the Ems . Because it is quite wide - even in the city of London - it flows very slowly.

The Thames rises at a height of 110 m above sea level. The source is Thames Head near the village of Kemble in the Cotswold Hills , a karst area with little surface runoff. The Ha'penny Bridge in Lechlade on the edge of the Cotswolds is considered the start of the navigable Thames. It then flows partly in pronounced meander arcs through Oxford (here called "Isis", an abbreviation of its Latin name Thamesis ), Wallingford , Reading , Maidenhead , Eton and Windsor . After leaving its headwaters Gloucestershire , it traditionally forms the border between the counties, first between Gloucestershire and Wiltshire , between Berkshire on the south bank and Oxfordshire in the north, then between Berkshire and Buckinghamshire , Buckinghamshire and Surrey , Surrey and Middlesex and between Essex and Kent . Even today, the Thames is an administrative border, albeit one that is no longer so important.

From the Teddington lock about 90 kilometers before the mouth, the tides of the North Sea are noticeable. According to tradition, London was made the capital of Roman Britain because it was there in 43 BC. First tidal activity began to appear in BC, but a combination of factors has shifted this point upstream over the past 2000 years. In London the water contains slight amounts of sea salt ( brackish water ).

Between Maidenhead and Windsor, the Thames supplies an artificial side canal, the Jubilee River, created for flood protection . There are also numerous islands in the Thames.

A towpath , which is now a hiking trail - the Thames Path - accompanies the river over almost its entire length.

The original course of the Thames was different from today. In Oxfordshire it followed its current course, but it then turned to Bedfordshire and East Anglia and flowed into the North Sea at Ipswich . In the Elster glaciation , the ice blocked this outflow. The dammed up water, together with the meltwater from the ice, formed a lake that dug a new drain through the chalk at what is now Goring Gap and diverted the Thames onto a more southerly path.

At the height of the last glacial period , the Vistula glacial period , England, together with the dry area of ​​today's North Sea ( Doggerland ) and continental Europe, formed a contiguous land mass. At that time, the Thames was a tributary of the Rhine .

During the Little Ice Age in the 17th and 18th centuries, the Thames was often frozen over in winter. In 1607 a " Frost Fair " in the form of a tent city was held on the river for the first time , offering a range of amusements, including ice skittles. After the temperatures rose again from 1814, the river no longer froze completely. Another factor could have been the construction of the new London Bridge in 1825: the new bridge had fewer piers and allowed the river to flow faster so that it was no longer slow enough to freeze over completely.

In the 18th century, the Thames became one of the busiest waterways in the world as London became the center of the great, trading British Empire. Upstream, the Oxford Canal created a connection from the Thames near Oxford via the Coventry Canal to the Midlands from 1790 , which further facilitated coal deliveries to London.

At that time the most serious shipping accident on British inland waters occurred on the Thames, when on September 3, 1878 the paddle steamer Princess Alice (built in 1865) and the coal freighter Bywell Castle collided at Gallions Reach. 640 of around 800 people died in the collision. Then the Marine Police Force, based in Wapping, was equipped with steam-powered rescue ships. Among other things, a regulation came into force in 1880 that provided for the provision of life jackets in the future.

During the Great Stench in the summer of 1858, the pollution and accompanying stench of the river became so bad that sessions of the House of Commons in Westminster had to be suspended. In a concerted effort, large sewers were built on both banks under the direction of the engineer Joseph Bazalgette (see also: London sewer system ).

With the advent of the railroad from the 19th century, the increase in road traffic and the decline of the Empire from the years after 1914, the economic importance of the Thames also declined. London itself is no longer an important inland port, the Port of London is further downstream at Tilbury . Life is slowly returning to the previously dead, polluted river, and the Thames is now one of the cleanest rivers in the world flowing through a metropolis.

In Woolwich , a district in the southeast of London, is since 1984 the barrage Thames Barrier . It protects the upstream areas from storm surges in the North Sea . With a length of 523 meters and 10 pivoting gates, it is one of the largest storm surge protection systems in the world. The British government commissioned the £ 534 million construction after the catastrophic storm surge of 1953 that killed over 300 people. When the gates are open, tidal currents and shipping traffic remain unhindered.

Numerous bridges cross the river, the most famous of which is Tower Bridge in London. The wooden and stone buildings that preceded London Bridge are historically significant (some with houses from 1176 to the end of the 18th century, a thousand years before that made of wood). In 2006 a whale got lost in the Thames. He died despite attempts to get him back into the sea. Important crossings for car traffic and the tube (subway) are designed as tunnels .

Competition venues for the 1908 Summer Olympics

Competition venues for the 1948 Summer Olympics