The title of this article is ambiguous. See Rugby (disambiguation) for other meanings . 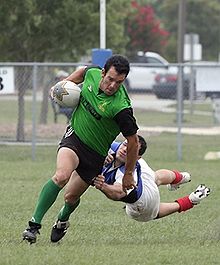 The school building of the Rugby Public School

Tackle in the rugby Bundesliga 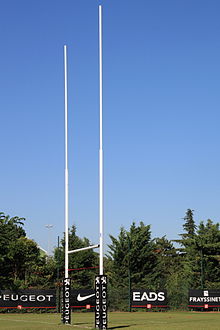 Rugby ( English also rugby football ) belongs to the family of team sports that emerged together with football in England . American football and Canadian football later evolved from rugby. The most common variants are rugby union and rugby league . Rugby Union has established itself as the world's leading rugby sport since its professionalization in the 1990s , even if the low-contact variant of touch rugby is increasingly gaining ground in popular sport and the variant of rugby 7, which has become Olympic, is currently experiencing a development boost.

Basics of the game

Common to all rugby variants is the use of a ball in the form of an elongated ellipsoid of revolution . The aim is to carry or kick the ball past the opponent and thereby score points. This can be done in several ways:

The ball may only be thrown backwards or passed by hand. When the ball is thrown forward, however, has a crush be executed (Engl. Scrum ). The scrum describes the mutual tying of the players numbered 1 to 8, who then “push around the ball”. You could call it a kind of trial of strength: The players stand in front of each other in a stooped position with their backs straight, with the opponent nested in one another, and try to push the opponent away by pressing together and thus release the ball for their own team.

Kicking the ball is allowed in all directions. Only the player carrying the ball may be attacked. It is allowed to hinder this by clasping and holding down ( tackle ) below the shoulder line and, if possible, to bring it down. A player who touches the ground with more body area than the soles of his feet has to let go of the ball immediately and is no longer allowed to reach for it; if he does not, the opposing team gets the ball. If the player is on the ground, other players from both teams may push and push the ball, but may not use their hands. Hitting and tripping is strictly forbidden when holding down.

The playing attire consists of a sturdy jersey , shorts, knee socks and cleats . Wearing a mouthguard is mandatory. Hard protective clothing is not allowed. However, some players optionally wear a cap made of soft, thinly padded material, which is primarily intended to protect the ears, or a thin, foam-lined shoulder pad under the jersey.

The goal consists of two vertical poles , 5–6 m apart and a cross bar 3 m high. You are in the middle of the goal line . Protective pads are attached to the lower ends of the painting poles to prevent injuries. ( Rugby Union , Rugby 7 and Rugby League ).

Typical game elements rugby are arranged and ruck (engl. Jerk ), the packet (engl. Mouth ), the lane from the side line (engl. Lineout ) and the running and passing the so-called three-quarter row (engl. Three quarters ). 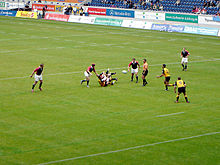 While the original rugby union sport was played on the pitch with 15 players (per team), there is now a variant in which seven players are on the pitch, 7-a-side rugby . Since the ball is mainly wielded by hand, rugby union can also be played in the sand, which is where beach rugby originated. Variants with twelve and ten rugby players are also possible, but there is no separate set of rules for them, the rules of the 15 rugby union apply . The almost contactless versions Touch Rugby and Tag Rugby, which emerged from the Rugby League, have recently become extremely popular . 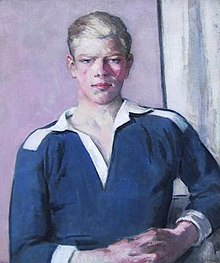 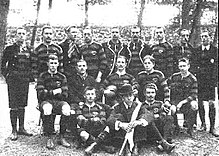 German rugby team at the 1900 Summer Olympics in Paris

Legend has it that rugby was created during a football game in the city ​​of the same name . When William Webb Ellis's team faced defeat in 1823, he grabbed the ball in his hands and put it into the opponent's goal. Although there are reasonable doubts as to the veracity of the story - the ball was previously carried by hand in most variations of the game - the Rugby Union World Cup is named after William Webb Ellis (the Webb Ellis Cup ).

In 1863, the English Football Association (FA) was founded with the aim of standardizing the still diverse football rules . Due to disputes about rule changes, some clubs withdrew from the association and founded on January 26, 1871 with the Rugby Football Union (RFU), a competing association, which gradually standardized the rules of the rugby school in the following years. On March 27th of the same year, the first international match between Scotland and England took place in Edinburgh .

In 1895 there was a further separation, this time within the RFU , due to a dispute over the amateur idea. 21 clubs, mainly from working-class districts in the north of England, split off as the Northern Rugby Union (today Rugby Football League ), established their own rules and allowed the sport to become more professional. The Rugby League variant developed from the changed rules . To this day, both variants of rugby exist side by side. International meetings of national teams are held according to the rules of both rugby union and rugby league. Professional athletes have also been admitted to rugby union since 1995.

Rugby in its various forms is extremely popular , especially in parts of the British Commonwealth and countries in the southern hemisphere . Leading nations are New Zealand , Australia , South Africa and Argentina in the southern hemisphere and France , England , Wales , Ireland , Scotland and Italy in Europe. Rugby is also the national sport in the oceanic countries of Fiji , Samoa and Tonga . In addition to these countries, Japan , the USA , Romania , Namibia , Canada , Georgia and Spain regularly take part in the Rugby Union World Cups and have a distinct rugby culture. The strongholds of rugby league are England, New Zealand and especially Australia.

In German-speaking countries, the term rugby is usually understood to mean rugby union. But there are also efforts in Germany , Austria and Switzerland to build a rugby league culture. Variants such as touch rugby are enjoying growing popularity in schools. 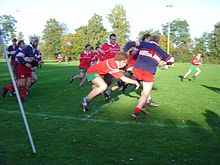 In many traditional rugby nations Rugby Union is generally regarded as a sport of the " establishment which is mainly played by the upper class and the upper middle class". It is also the preferred variant in private schools and high schools. In contrast, rugby league is traditionally seen as a sport for the " working class " and the lower middle class , especially in the north of England and east Australia . One exception to these stereotypes is Wales in particular , where rugby union is associated with teams from small villages inhabited by miners and industrial workers. In New Zealand , southern France , parts of southern England, Scotland , Ireland and the Pacific Islands, rugby union is also widespread among the working class.

Differences between the individual types of rugby and football

The main differences between rugby and gridiron football :

The impressions of a rugby match were processed by Arthur Honegger in one of his symphonic movements (more on this in the article Rugby (Honegger) ).