The following important information is missing from this article or section:
The American Flag Football League
Help Wikipedia by researching and pasting it .

Games between girls' teams , mostly at high schools in the United States , are also called powder puff (or powder puff ). The name was inspired by powder puffs ( English Powderpuff ).

There are many game variants in Flag Football, the most common in Europe:

For official association games, there is a league system in Germany for children and young people as well as for adults. Mixed sex teams are permitted.

In the USA ( USFTL , IFFF and other associations) the following variants are also played: 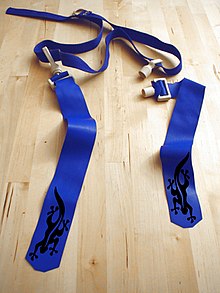 Depending on the game variant, each player wears at least two flags - one on each side of the waist . Sometimes three, so that it can be better stopped from behind. In contrast to traditional American football, the probability of injury is significantly lower with flag football, which makes the game an alternative, especially for children and young people, but the sport is also popular with older people.

Flag football is basically the same as tackle football. Things like “ touchdown ”, “ extra point ” and “ safety ” are also part of Flag Football. Just like fast runs and an attractive passing game . The main difference, which gives it its name, is that tackling is replaced by pulling the flag.

For the 2005 season, the "Flag Football Rules" was published as a separate set of rules for the first time. So the rules are no longer additions or exceptions to the tackle set of rules. Nevertheless, it is still closely based on the rules of tackle football. Since 2009 there have been international rules for the 5on5 variant .

There are some differences between the sets of rules. Most of them have to do with the flags and the lack of equipment. The main purpose of the rules is to protect and maintain the health and safety of the players.

In addition to the tackling rule, some “flag rules” have been added. These extra rules include:

Overall, this means that extensive running and passing play leads to success. It demands speed and agility from the players. Since physical strength cannot be used against the opponent, the risk of injury is reduced.

Official results according to IFAF.

Official results according to EFAF.

In America, 8 million players play flag football, but only 500,000 of them play tackle football. The NFL Europe started in 1997 to make this sport known to children and young people in Germany, especially in schools. As a result, there was also increased interest in flag football among adults, with the number of adult teams taking part in constant game operations in Germany to over 25. Expensive protective equipment is not necessary, which makes it easier to get started with this variant. Flag Football introduces children and young people to tackle football. Since 2001, over 300 amateur and league teams have formed in Germany and Europe. With several successful flag football events and the establishment of a Bundesliga, increased audience interest can be observed.

The first flag football tournament on German soil took place in this 5-way version in 1997 in Wiesbaden. Two US and one German teams (the Rheingau Allstars - from 1999 Wiesbaden Phantoms Allstars ) met. The tournament is called the "Rhein-Main-Bowl". Since then it has been the most traditional and, until 2006, also the largest tournament. Until the end of 2006, the Rhein-Main-Bowl was an unofficial German championship.

The largest international club tournament came about with the creation of the "Big Bowl" in Walldorf . Teams from seven nations (Denmark, France, Israel, Italy, Austria, Switzerland and Germany) and eight federal states met each other. A total of 37 teams competed for the title in three categories over two days. In the women's category, the Israeli national team won 13: 6 against the Austrian national team in extra time. The youth trophy went to the local Walldorf Wanderers Juniors, who got the upper hand in the final against the Austrian national team. The men's title went to the French “Le Havre Salamandres”, who prevailed against the Italian champions “Cavriago Cleavers”.

Flag Football has been played in the league in Germany since 1999. In the youth sector mainly within the federal states in the age group 10 to 15 years, in the adult sector (from 16) until 2005 in the regionally existing leagues, since 2006 also in the DFFL (German Flag Football League), a nationwide licensed league. In league games, the semi-contact variant 9on9 is the most widespread so far. However, the contactless version 5on5 is finding more and more fans and growing faster and faster. Many new leagues have emerged in this variant, mainly for children under 10 years of age.

Since the game operations in Flag Football can be designed very freely in each federal state, there are also some variations that are each unique.

Since 2016 there has also been a DFFL for game operations in the 5 flag for the first time. The league is divided into 5 seasons (North, East, South, West 1 and West 2) and the game days are played in tournament form. Each league team can register and run its own game day. The other teams can then register. A running 5-point DFFL season table is kept. Depending on the number of teams participating in a tournament and their placement, each team receives points. The points of the best 6 season placement of a team are included in the DFFL season table. At the end of the season, the first placed in each season as well as the eighth other best placed, which are determined from the overall season table, qualify for the final tournament for the title in the 5 flag.

In the final tournament, the 12 qualified teams play in four groups of three. The first and second placed in a group then play in PlayOff mode (quarter-finals, semi-finals) for a place in the final. In 2016 and 2017, the Kelkheim Lizzards and the Walldorf Wanderers met there.

The exact game mode in the league operation of the German Flag Football League (DFFL) depends on the number of registered teams and is redefined every year. After there had been a north and a south group in the previous years and the group first and second made it to the semi-finals of the DFFL Bowl, the 2014 season played in three groups.

In the preliminary round, all teams in a group compete against each other in a first leg and a second leg. In order to determine the participants for the quarter-finals, all twelve teams were listed in a group-wide ranking in 2014, which was based on a value calculated from the number of games won, the points scored and allowed and the penalties received. In the quarter-finals, the first-placed team met on the table eighth, the second on the seventh, etc. and determined the semi-final participants. The respective winners of the semi-finals play in the final for victory in the DFFL Bowl and the associated title of German champion.

The first German champions in adult flag football in 1999 were the "Munich Coyotes". The German champion has been determined in the German Flag Bowl since 2000. In 2010 the final was renamed the DFFL Bowl.

Flag football has been played at German universities since 1999. The unofficial university championships in the form of the adh open of the General German University Sports Association (adh) have existed since 2002. The popular indoor flag tournament "Snow Bowl" has been played annually in January in Thuringia at the TU Ilmenau among 15 teams since 2002 . It is played only 5 against 5 without contact according to the flag football rules of the AFVD. The plan is to play the 1st University Bowl as the official German University Championship in spring 2011 on the occasion of the 10th adh open flagfootball in cooperation with the AFVD.

Since 1999 there has also been the German Junior Flag Bowl in Germany. At this event, the national champions meet in a tournament to play the German champions. Boys and girls aged 10 to 15 are eligible to play.

German championships have also been held in the hall since 2007. As in the German Junior Flag Bowl, the state winners play for the title, the game mode is 5on5.

A German School Flag Bowl has also been held since 2007. The game mode is 5on5.

The predecessor of today's German School Flag Bowl was the Germany-wide German S'Cool Final, which, also in 5on5 game mode, was held in Cologne in 2006 and 2007.

A first major flag tournament was held in 1997 by the AFBÖ . Then some clubs were founded that played games in small tournaments. Due to the increasing popularity of the sport, the Flag League Austria (FLA formerly AFL) was founded in 2001 and the first official Austrian championship was held.

At first there were only a few clubs, but the scene grew continuously. Ten teams from several federal states (Lower Austria, Styria, Vienna and Upper Austria) are currently playing in the Bundesliga FLA for the Austrian championship title. In addition, the second Bundesliga "Flag Liga Austria 2" (FLA2) was introduced in 2011, which emerged from the unofficial "FlagLiga 2" launched in 2009. The winner of the FLA2 final will be promoted to the FLA, while the runner-up will play a relegation game against the penultimate of the FLA at the end of the season for promotion to the Bundesliga. The last of the FLA is relegated directly to the second division. A third Bundesliga (FLA3) has also been launched since the 2019 season. The winner of this league takes over the starting place in the next FLA2 season, instead of the last one in the previous one.

The Austrian men's national team won the European championship in 2003 and the world championship in 2004 (5 against 5). In August 2012, the men's selection won the largest (16 nations for men, 12 for women) flag football world championship tournament in Gothenburg, Sweden, and secured the gold medal with a final victory ahead of the US men and the Danish national team. With Michael Terzer (Klosterneuburg Indians) an Austrian attacker was also named the “Most Valuable Player” of the tournament. In 2018 the men's national team was able to secure the silver medal behind the selection of the USA.

Since the 2019 season, 25 teams have been playing in Austria's three federal leagues. Furthermore, some teams have teams in the Flag League Ladies (FLL) and Flag League Youth (FLJ).

An Austrian championship has been held since 2001. A basic round and play-offs are played, the final is the Flag Bowl, in which the placements are played out. To bridge the winter months, an indoor bowl has also been held since 2005. It is played according to the official rules in the 5 against 5 variant.

Flag football has been a recognized sport in Austria since 2008 and the winner of the FLA is the official Austrian national champion.

The following important information is missing from this article or section:
History of flag football in Switzerland (since when has there been a championship, other championship titles?)
Help Wikipedia by researching and pasting it .

In Switzerland, the Swiss American Football Association (SAFL) is responsible for flag football. In addition to the National Flag Football League (NFFL) for adults, there are also youth championships in the U13 and U16 categories.

The following teams took part in the 2017 NFFL championship. The place of origin of the team is in brackets, if this is not evident from the name: