An American football field with the typical grid layout

Gridiron Football ([ ˈgɹɪdaɪən ˌfʊtbɔːl ], English for "grid football") is a collective term for a number of ball sports that are particularly popular in North America . The “gridiron” is the common name for the playing field, which is marked with cross lines every five to ten yards and resembles a gridiron. The best known of these games is American football, which dominates especially in the USA . There are also versions of this with smaller playing fields and fewer players, as well as arena football , a hall shape and less body-hugging variants such as flag football . In Canada 's Canadian Football common. In addition to the field of play , the so-called football sports have other things in common. This includes the course of the game (division into downs , change of possession ...) or the transport of the ball (especially the passing game ). 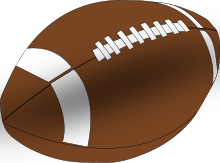 Due to the specific requirements of the sport, especially those of the passing game, this somewhat smaller and more pointed elongated ellipsoid of rotation of the ball was developed.

Typical move from a playbook. Passing play from the I formation.

American football and, largely independently of it, Canadian football emerged in the second half of the 19th century from the European ball sports football and especially rugby . Important contributions to the development of American football as an independent sport were made by Walter Camp, who is considered to be its inventor, as well as Amos Alonzo Stagg , Glenn Scobey Warner and John Heisman . A defining difference between the Gridiron football games and rugby is the throwing of the ball , known as a forward pass , to a teammate who is further forward in the attacking direction , which is not permitted in rugby, whereas it was permitted in American football in 1906 and is next to the Running plays developed into one of the game-defining elements of sport.

At the beginning, football, like rugby ball, was flattened and had no pointed ends. This only changed years after the first legal forward pass in 1906. Previously, the ball was only run without the need for a small, easy-to-throw ball. In 1912 the shape was changed, in particular the diameter was reduced. Even so, the football was still very much like a rugby ball. It was not until the late 1920s that it got its current shape with eight seams and roughly the same size, and the metal valve, which often caused injuries, was replaced by a rubber valve.

The name Gridiron Football is derived from the grid-like division of lines on the playing field, which is an important basis for the course of these games. The decisive factor for the course of the game is that the attacking team must gain a certain amount of space by throwing or carrying the ball within a specified number of attempts in order to remain in the right of attack and in this way to bring the ball to the opposing end of the field of play . Characteristic of the Gridiron football variants compared to their predecessor games are a game course that is strongly tactical and consists of completed moves, the use of separate team parts for attack and defense formations and a pronounced specialization of the players in certain team positions. Due to the body-hugging style of play, with the exception of flag football, unlike in football and rugby, the players are equipped with extensive protective clothing, which in particular includes a special football helmet.