This article covers the concept of sport. For other meanings, see also La Défense (disambiguation) . 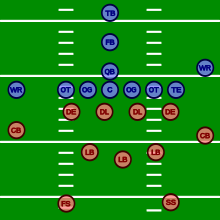 Positions in American football, positions in defense are marked in red.

Defense ( English for defense ), the defending team in American football called. Your task is to prevent the attacking team from scoring a first down or even a touchdown . If necessary, a defender can score points himself through a canceled fumble , an interception or a safety .

The defense consists of the defensive line (DL) and the so-called backfield . The defensive line is usually formed by three to six players on the defensive ends (DE) positions on the outer sides and defensive tackles (DT) or defensive guards (DG) in between. As backfield are Safetys , cornerbacks and linebackers summarized. The task of the cornerbacks and safetys is to prevent the opposing wide receivers and running backs from catching the ball or running far with it. The job of the linebacker is similar to that of the defensive backs , with an emphasis on defense against running play, but they are also increasingly used for lightning . The game leader in defense is almost always the middle linebacker (MLB), the coach responsible for defense tactics is called the defensive coordinator .

Every defense is trained on a specific strategy. Defenses with fast, large and heavy linebackers can flash more often and better, which is effective against runs. Good cornerbacks and safetys are accordingly better against passing games. A good defensive coordinator will always try to add some versatility in order to be able to withstand a wide range of opposing strategies.

There are usually two different ways of preventing an opponent from advancing with the ball, zone coverage and man-to-man coverage . Theoretically, a defense can only play zone or man defense, but in most cases these options are combined and varied depending on the game situation and offense formation. Some players, usually defensive linemen or a blitzer , only have the task of putting the quarterback under pressure.

With man-to-man cover, a defense player is responsible for a specific player or an offensive position. Particularly dangerous players may be covered by two or more defenders at the same time, which of course leaves gaps in other positions. The advantage of man-to-man coverage is the clear assignment and even distribution of responsibilities. Each defender is only responsible for one attacker, but if he is left behind there is no second protection, which is why there is at least one unbound defender in most formations, the free safety .

With zone coverage, a player is assigned a precisely defined zone on the field in which he should stop the opposing ball carrier or prevent a pass from being caught. The advantage of zone defense is the greater flexibility and lower susceptibility of agile and fast offense players, since the defenders in the zones have time to watch the quarterback and anticipate the direction of the throw or the direction of movement. However, if there are several opposing players within a zone, the defender may no longer be able to cover them all at the same time. Communication and the coordination of responsibilities among the players is of great importance here, which is why the implementation of a zone defense for a defense is a greater challenge than a man defense.