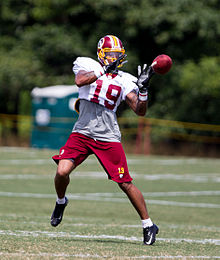 A wide receiver when catching passports

The wide receiver (WR), more rarely wideout, is a position in American football , Canadian football, and arena football . Its main task is to receive a pass from the quarterback or another passer. In the past, the wide receiver was also known as the end .

Football was initially a very running sport. It wasn't until the late 1920s that the passing game became more popular. In the few attempts to pass since the introduction of the forward pass in 1906, the ends, the outermost players on the line of scrimmage , were thrown at the top. These were tall and lighter players whose main task was to block outward runs in offense and to prevent runs over the outside in defense . With the abolition of the one-platoon system after the Second World War, which meant that a player no longer had to play in both offense and defense, the offensive ends and the defensive ends developed differently. This was followed by the division of the ends into tight ends and flankers. Today's wide receiver evolved from the flanker, which is not characterized by a standardized body scheme, but above all by speed and catching security. Despite this development, the wide receiver remained relatively insignificant. Between 1974 and 1986 only two wide receivers led the National Football League (NFL) in trapped passports. However, a number of rule changes made the passing game more attractive. As a result, the importance of wide receivers also increased. Since 1987, only one non-wide receiver has managed to lead the NFL in passing catches ( Tony Gonzalez , 2004).

A wide receiver in the correct position. He directs his gaze to the center in order to recognize the time of the snap and thus avoid a false start .

In order to be able to accelerate as quickly as possible, a receiver positions itself in a typical position. The feet are about shoulder width apart and one foot is offset backwards like a starting block . In addition, his upper body is slightly bent forward.

After the snap of the center to the quarterback, a wide receiver runs the pass route of the play that was announced in the huddle . An exception to this is the run-and-shoot offense , where there are no predetermined pass routes. Here, the wide receiver reads the defender and reacts to his actions with certain, previously defined, pass routes. Since this requires the same reaction from both the receiver and the quarterback, this method is very error-prone, which is why it is only used very rarely after a short phase of popularity in the 1990s. Since the receiver wants to distance himself from the defender, he also tries to disguise his pass route. He tries to hide his intention by using changes of direction and tempo. The moment of change of direction is called the cut or stem .

The quarterback now tries to throw the ball into the receiver with an accurate pass. The receiver should always keep an eye on the ball when catching it and only think about the approaching defender after it has been successfully caught. In addition, the wide receiver should have its fingers spread when catching passport. If the pass is at chest level or higher, both thumbs should point inward and the hands should form a funnel. If the throw is deeper, the thumbs should point outwards. The receiver must get the ball under control before the ball hits the ground. He may only catch the ball inside the field. This means that in order to completely catch the ball according to the rules, the receiver must gain control of the ball while one part of the body is still touching the ground within the playing field, e.g. B. with your foot. In the National Football League (NFL) the rules are even stricter, because here the player has to be in the field with both feet in order for a catch to be given as a completion (German: completed pass).

At the beginning of a play, a receiver has to read the defense , which results in different reactions. If he recognizes a man detection , he must keep moving in order to create a distance from the defender, while in the case of a space covering he visits the zones between the defenders and can also stay there if necessary.

The tasks of a wide receiver also include blocking. He tries to keep opponents away from the ball carrier. This happens both with running plays and with passing plays , especially screens .

A good receiver is characterized both by its ability to catch balls safely and not to allow any "drops" or fumbles (balls dropped), as well as by its bounce and speed. In addition, a good understanding of the game, good hand-eye coordination and the ability to change direction quickly are beneficial. Receivers should also be able to block well.

A wide receiver must have a specific number on his back in order to be eligible for a passport. Numbers 50–79 are not allowed to catch a legal forward pass, so a receiver must have a number from the ranges 1–49 or 80–99. If the league allows it, the zero or double zero can also be worn. In the 1973 NFL positions were assigned specific jersey numbers. In the beginning, wide receivers were only allowed to have numbers between 80 and 89. Since 2004, they have also been allowed to wear jersey numbers between 10 and 19.