Matt Bosher , the Atlanta Falcons' punter and kickoff specialist, at a kickoff at the 2016 training camp 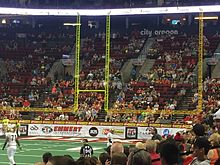 The metal structures to be used in arena football

Kickoff specialists in American football should be able to shoot the ball over the end zone and achieve a touchback . This can reduce the risk of a long return with a good kick returner . In the National Football League (NFL), the edge diminished with the line of scrimmage shifting to the 25-yard line after a touchback, so touchbacks are not necessarily the target of a kickoff. Rather, the goal now is often as close to the goal line to kick and doing a great hang time is so that the enemy as close to their own end zone stopped (time during which the ball is in the air) to have and there his next own Attack series must begin. In arena football , the ideal kickoff meets the field goal construction or the goalside rebound net construction. Here this is not considered to end the game and, in contrast to the net itself, the capture of the ball by the kicking team is more likely.

The use of a kickoff specialist is advantageous as it reduces the stress on the kicker's body during the seasons. The activities of the kickoff specialist in the professional area are usually taken over by kickers or punters , as the kickoff specialist would otherwise take up another place in the limited squad. Between 2006 and 2016, only eight Kickoff Specialists were active in the NFL. If a team has a precise kicker that can only manage short distances, it may well be necessary to have a kickoff specialist. For example, the Denver Broncos brought Brandon McManus for the kickoffs in the 2014 season after Connor Barth was unable to bring his kickoffs constantly into the end zone.