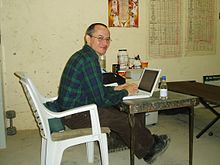 Joe Sacco (born October 2, 1960 in Kirkop , Malta ) is a Maltese- American comic artist . Sacco now lives in Portland , Oregon and defines himself as a drawing journalist. He is considered the inventor of the comic report : "Sacco is the creator and genius of this form."

Sacco moved to Australia with his parents (a teacher and an engineer) at the age of 9, then to the USA in Los Angeles and Portland , Oregon in 1972 . After graduating from the University of Oregon with a degree in journalism in 1981, he turned to comics . In 1983 he returned to Malta, where he published a series of love stories as his first graphic product . Two years later, back in the US , he was co-editor of the monthly Portland Permanent Press , 15 issues of which were published.

In 1986 Sacco moved to Los Angeles to work for Fantagraphics Books , where he worked on the Comics Journal and founded the satirical magazine Centrifugal Bumble-Puppy . Between 1988 and 1992 he traveled the world and took part in the European tour of the rock band Miracle Workers . During this time he also created his own comic book series under the name Yahoo (6 issues).

At the end of 1991 he was in Israel and the Occupied Palestinian Territories . Because he could not let go of what he experienced there, he dedicated a series of stories to Palestine at Fantagraphics from January 1993. His reportage-like comics, in which text and image alternate, resemble the form of Art Spiegelman's Mouse - The Story of a Survivor . In 1996, Palestine , published in two volumes, was nominated as best new series for the prestigious Harvey Award . Sacco has "no formal artistic training, I worked primarily as a cartoonist before my research."

After his stays in the Middle East , Joe Sacco, who defines himself as a drawing journalist, traveled to the Bosnian enclave of Goražde : “Between the end of 1995 and the beginning of 1996 I went there four times. At the time of my arrival, the inhabitants of Goražde had already been through three and a half years of war . They were violently bombed, practically starved and fought house by house to defend their families. They lived in destroyed and burned houses, often without electricity or running water. They were still cut off from friendly territory. And they did not know whether their situation would be taken into account in the peace process. But they also began to understand that they might soon have to plan the post-war period, to get back to the banality and the world before the nationalist slogans, hunger, bullets and massacres. I tried to describe this reality. "

In addition to Safe Area Goražde (2000. German Bosnia , 2010), another work on Bosnia was published in 1998 with Soba . The media in Germany are full of praise for Bosnia : "An oppressive and impressive panorama of the Balkan conflict (...). It breaks through panel structure and squareness again and again, varies in selected places into expressionism, without getting lost in effect-seeking fuss."

At the end of 1998 he set out to follow in detail the processes at the International Criminal Tribunal for the Former Yugoslavia in The Hague . In 2003, More Women, More Children, More Quickly described his mother's everyday life in Malta during World War II.

In 2009 he published Footnotes in Gaza (German Gaza , 2011), a sequel to "Palestine". Sacco himself explains about the background: “In 1992 I traveled to Palestine because I wanted to know what was really going on there. (....) The conflict has never let go of me since. "

On the creation of Gaza : Around 2001 Sacco came across a document in a UN archive that mentioned two massacres of the Israeli army of the Palestinian civilian population in 1956 during the Suez crisis . Sacco interviewed eyewitnesses from then for Gaza and also describes the living conditions in Gaza today. "Thanks to the juxtaposition (...) Gaza becomes a multi-layered and polyphonic report, which not least examines the mechanisms of the conflict between Israelis and Palestinians." The SPIEGEL judges "Overall, the comic appears more reflective and precise than" Palestine ", but also more rigid." “The translation of the 300-page work (...) was an excellent success."

Sacco is currently working with journalist Chris Hedges on a book about poverty in the United States .

Sacco deliberately works with the comic genre: “While the novel often looks around the nose and gets lost in interior views, a comic has to tell in pictures. The comic art is ideal for the documentary: It is outwardly oriented, but combines non-fiction with subjectivity. In short: The comic can do more - also in terms of honesty. "

“The pictures are as laconic and clear as the narrative style and descriptions of the Bosnians: Sacco's drawings are extremely realistic. Sacco skillfully varies details and long shots ”

Transparency is one of Sacco’s basic narrative attitudes: “In all reports, it is important to me that the reader understands how I work, how I get my information and how I use it, how I choose certain anecdotes, discard others, how I understand the credibility of mine Informers check and assess etc. The reader should also understand that the contradictions do not call into question the truth of the story itself. "

But he does not want his comic reports to be understood as journalistically objective: “I don't believe in the objectivity that is taught in American journalism schools - I believe in fairness. If you see things that contradict your beliefs, then you have to show them. "

Sacco names Chris Ware , Daniel Clowes , Charles Burns and Marjane Satrapi as important comic authors , but “it would be good if more comic book authors took artistic risks. (...) The comic is a pop medium, but now it lures readers into complex topics. It's subversive - and an important reason why I stay loyal to the comic. "