This article covers the historical region of Bosnia. The state of Bosnia and Herzegovina is also known colloquially as "Bosnia".

Bosnia got its name from the river Bosna , which rises near Sarajevo and flows into the Save (Sava) via Zenica and Doboj near Šamac .

Landscape near Donji Vakuf in the south-western part of Bosnia

Bosnia is a largely mountainous country with a continental climate and sometimes very cold winters. The vegetation is essentially typical of Central Europe. Wolves , bears and wild boars can still be found in the vast forests . The 1984 Winter Olympics made the Jahorina , Bjelašnica and Igman ski areas around Sarajevo world famous.

Bosnia is bordered in the south and west by the Dinaric Mountains and Herzegovina. In the north it ends at the Una and Save rivers ; in the east it extends roughly to the Drina .

With the exception of the northern region, which stretches along the Save, the country is criss-crossed by more or less high mountain ranges, the highest peaks of which can be found in the foothills of the Dinaric Alps :

The main mountain ranges in northern Bosnia stretch from southeast to northwest and form high, elongated ridges and fertile valleys. In the southern area, mountains with a sharp profile and karst character , rocky peaks and crater-shaped basin valleys ( polje ) predominate , the mostly elongated soles of which are filled with water during the rainy season . In summer they dry out and form deep cracks. The outskirts of these basins rise up to 700 to 900 m. They are bare and jagged limestone rocks . Instead of forest, there is only sparse scrub here.

Bosnia's main river is the Save , which forms a natural northern border with Slavonia . The Save is navigable for light vehicles and forms one of the most important transport routes. Its largest tributaries are the Una, the Vrbas , the Ukrina , the Bosna and the Drina , which flow into it from the south. Their valleys form the most important traffic axes through Bosnia.

Panorama of the north-western landscape of Bosnia (view from Brekovica )

Even in antiquity , Bosnia was an important transit country between the Adriatic and the Danube , so that some prosperous trading cities could develop in the fertile and mountainous country. At that time, Bosnia was part of the Roman province of Illyricum . Many excavations and fortifications still bear witness to the Roman presence.

After the immigration of the Slavs in the 7th century, Bosnia was mostly under Byzantine rule, but the princes managed to acquire and maintain extensive autonomy. Later it was also part of the Bulgarian and Serbian empires as well as part of Hungary . However, all foreign rulers were unable to exert direct influence on the politics of the country, power remained in the hands of the local nobility and princes. Some parts of Bosnia belonged to the Kingdom of Croatia, founded in 925 , until 1102.

The country name Bosnia appears for the first time around the 10th century, but here it only refers to the heartland on the upper reaches of the Bosna. In the years 1154 to 1463 it was mostly an independent principality or later a kingdom.

The first known ruler of Bosnia was from the Kingdom of Hungary associated Slavonia originating Ban Borić , who reigned 1154-1164. During his reign, the Kingdom of Hungary and Byzantium were at war. Boric took the side of Hungary, where he participated in the siege of Braničevo. On his return to Bosnia he was defeated by the Byzantine army and had to flee.

According to Ban Borić, Byzantium ruled Bosnia until 1180 . Now Ban Kulin came to power. He took advantage of the temporary weakness of Byzantium through the death of Manuel I. Komnenos and increasingly recognized the rule of Hungary . However, this did not affect the independence of Bosnia and Ban Kulin took the territory of the Usora and Soli , with which the rule of Bosnia expanded to the entire course of the Bosna river. Like the conquests, the economy advanced. Ban Kulin signed a trade agreement with the Republic of Dubrovnik in 1189 , also known as Povelja Kulina bana . This is one of the earliest state documents in the Balkans. At the end of the 12th century there were increasing charges against Ban Kulin for his support for the Bosnian Church , which was viewed as a heresy . This was made by Pope Innocent III. very deprecated, and he persuaded the Hungarian king to embark on a crusade against Bosnia . Ban Kulin saw the danger and adopted the Catholic faith on the Bilino Polje in Zenica with a large number of followers of the Bosnian Church . There is no precise information about the successor of Ban Kulin. 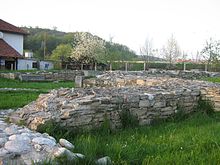 Remains of the church in Mile, presumed coronation site of Tvrtko I.

As a result, the house of Kotromanić became the ruling dynasty in Bosnia, from which Matija Ninoslav appeared as the Greater Ban of Bosnia around 1230 to 1250. He was a supporter of the Bogumils , but converted to Catholicism in 1233 . After a few campaigns he took Livno , the Neretva region and Ustiprača (Novo Goražde).

A relative appears after him, Prijezda I. Kotromanić , who also converted to Catholicism in 1233, was a major ban of Bosnia from 1250/54, appeared in 1254 as a Hungarian ban of Upper and Lower Bosnia (Dolnji Kraji and Vrh Bosna) and 1254 from King Béla IV of Hungary was enfeoffed with Novska County and died in 1287.

He was followed by his older son Prijezda II , who was Zupan of Zemunik in 1267 and Ban of Bosnia from 1287 to 1290/95 († around 1295). Prijezda II initially ruled together with Stjepan I Kotroman . After him, his brother Ban Stjepan I. Kotromanić († around 1314) came to power as the Ban of Upper and Lower Bosnia, but subsequently became dependent on his father-in-law, Stefan Dragutin , King of Serbia (1276-1282) and from the Princes of Bribir from the House of Šubić .

Stjepan I ruled only in the areas on the Drina. The Croatian Ban Pavle Bribirski (Šubić) took advantage of this and also took Bosnia. Pavle Bribirski's son Mladen I. Šubić died shortly after he became a ban. His brother Mladen II. Šubić now took power. He also raised the later Ban Stjepan II. Kotromanić . With the help of Ludwig I of Hungary, Stjepan II overthrew Mladen II and now took over the government. At the same time he became a vassal of Ludwig I, who also took his daughter Elisabeth as his wife.

In 1377, the Bosnian Ban Stjepan Tvrtko Kotromanić - either in Mileševa near Prijepolje or in Mile near Visoko - crowned himself king of Serbia, Bosnia, the coastal region and the western countries, causing him to be in political conflict with the regular successor to the Serbian royal crown, Marko Mrnjavcević , who ruled in what is now North Macedonia , came to an end. Tvrtko was the grandson of Elizabeth Nemanjić - a member of from Raszien originating Serbian royal dynasty of Nemanjić why he considered himself the rightful heir of the total Serbian crown. Tvrtko I. mother was Jelena von Bribir from the influential Croatian noble family of Šubić. The medieval capital and seat of the king was Kraljeva Sutjeska . Marko's uncle Uglješa Mrnjavcević ruled over the Hum, today's Herzegovina with its seat in Trebinje . The Kingdom of Bosnia became the most powerful state in the region for almost a century.

In 1389 King Stjepan Tvrtko Kotromanić followed the call of the Serbian prince Lazar Hrebeljanović and sent part of his army to the Blackbird Field to oppose the Ottomans with the rest of the Serbian army . In 1463, Bobovac near Kraljeva Sutjeska was taken by the Ottomans . King Stjepan Tomašević was executed. With the death of his wife Katarina Kosača-Kotromanić in Rome in 1478 , the Bosnian royal dynasty became extinct. In her will of October 20, 1478, she designated Pope Sixtus IV and his successors on the papal throne as heirs of Bosnia and the Bosnian crown as the last legitimate heir to the Bosnian crown.

Bihać was the last Bosnian city to fall only 70 years after Sarajevo . Bosnia thus became an Ottoman vilayet (province). After the Reconquista in Spain , displaced Sephardic Jews also settled in Bosnia.

With the reconquest of southern Hungary and Slavonia by Prince Eugene , the country became a border zone. Austrian troops tried several times to conquer Bosnia as well, but this failed, so that the saver boundary was able to stabilize. However, Prince Eugene destroyed Sarajevo during a campaign.

Bosnia was one of the most important provinces of the Ottoman Empire as it protected the empire's European border. The Bosnian Beylerbey , the sultan's governor, was endowed with unlimited power like no other governor. The governors of Bosnia, along with the sultan, were among the most powerful men in the empire. Besides the Bosnian governors, the title of Beylerbey was reserved for only a few other governors of the empire. During the Ottoman period, Bosnia achieved a second, oriental bloom; it was completely absorbed in the culture of the Ottoman Empire and many men from Bosnia and Herzegovina acquired high dignity at the court of the Sultan and became military leaders, diplomats and grand viziers of the empire.

In 1878 Bosnia was placed under the Austro-Hungarian financial administration ( condominium ), while it was formally under the Ottoman Sultan until 1908. During this time the term Bosnia and Herzegovina ( Bosna i Hercegovina ) was coined. In 1908 Austria-Hungary annexed Bosnia-Herzegovina, triggering the Bosnian annexation crisis . The assassination attempt in Sarajevo in 1914 by members of the student movement Mlada Bosna , including Gavrilo Princip , and the Serbian resistance group Black Hand was answered by Austria-Hungary with an ultimatum and finally a declaration of war against the Kingdom of Serbia , which was because of the guarantees of the great powers of that time among themselves and led to the First World War compared to smaller states .