from Wikipedia, the free encyclopedia
This is the spotted version , flagged on May 10, 2020 . There is 1 pending change that has yet to be viewed.

The climate in the region around the city of Livno is significantly influenced by its proximity to the Adriatic coast. There is a Mediterranean- influenced mountain climate with strong winds ( bora ) and many hours of sunshine per year. Summers are hot and dry, sometimes with temperatures above 40 ° C. Droughts, with numerous vegetation fires, are not uncommon. In contrast, winters are cool and snowfall occurs regularly. The snow cover in the mountains can be up to 150 cm high.

The nature around Livno has remained untouched in many places. There are still many wild boars, foxes, lynxes, wolves, bears and some poisonous snake species (especially European horned vipers ) and smaller scorpions in the region. The lakes and rivers in the area offer a habitat for numerous bird and fish species as well as crabs. 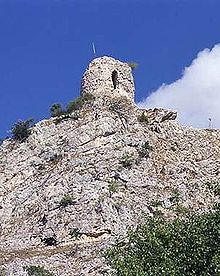 The history of Livno goes back to around 2000 years before Christ . From then until the arrival of the Romans (Pannonian-Delmatic uprising in the years 6 to 9 AD - according to the historian Velleius Paterculus , who was present at the Roman headquarters, 800,000 people took part in this uprising) - the Illyrian tribe of the Delmats settled the area around the city of Livno. The name of the region of Dalmatia is derived from the tribe of the Delmaten and their capital Delmium (today Tomislavgrad after the first Croatian king Tomislav ) .

Between 14 and 20 AD, the Romanization of the Livno region began with the construction of five roads. The main road led from Salona ( Solin ) to Servitium ( Gradiška ) and connected the provinces of Dalmatia and Pannonia .

The first mention of the city of Livno can be found on September 28, 892 in a document from the Croatian Prince Mutimir , with which the donation of the Church of St. Juraj (German: St. George) to the Bishop of Split Peter II is attested. The Župan of Livno, Želimir, is mentioned as a witness in the document. However, the latest excavations from the summer of 2007, as well as the research of historians, show that the city of Livno is even older. The old Roman villa rustica, found in the immediate vicinity of the city, dates from the 4th century and testifies to a lively urban culture on site. From 1326 Livno was under the Bosnian Banus Stjepan II. Kotromanić , only to become part of Dalmatia again after his death.

Until 1448, the Bosnian Vojvode Stjepan Vukčić Kosača , ruler of Hum , extended his territory to the areas of Poljica , Završje (area around Livno), Omiš , Gornja Zeta, Bar, Trebinje and Klobuk .

In 1448, by marrying the Bavarian princess , Stjepan Vukčić Kosača acquired the title of Duke , from which the name Herzegovina derives for his territory.

In 1463 Livno was occupied by the Ottoman military. During the Ottoman period, the city was initially part of the Sanjak Klis . After this had become mostly Venetian , Livno became part of the Sanjak Herzegovina . In 1485 there were 37 families and 26 citizens without permanent residence in Livno. In 1516 there were 2 Muslim and 63 Catholic families as well as 5 single people living in the city. Contemporary historical research, which the Bosnian historian Ahmet Burek presented in one place in his capital work "Kameno Hlivno" (The Stone City of Hlivno) in 2007, shows that the city of Livno was continuously inhabited and characterized by Muslims, with a minor Catholic, later also an Orthodox minority.

During the Candia War (1645 to 1669) and the Turkish War (1683 to 1699), part of the Catholic village population left the area to settle in Dalmatia ( Cetina region and Split ). This migration also had an economic origin that repeated itself in the same pattern in later centuries. On September 28, 1878, Livno, like all of Bosnia and Herzegovina, was subordinated to Austro-Hungarian administration on the basis of the resolutions of the Berlin Congress , while it remained formally under the Sultan until 1908 .

From 1945 to 1992, the city belonged to the Socialist Federal Republic of Yugoslavia (SFRY) and was administratively in the catchment area of ​​the city of Mostar for the first time , later this division was canceled. With the Washington Agreement in 1994, Livno became part of the Federation of Bosnia and Herzegovina and the canton capital.

The last officially available figures of the inhabitants of the municipality come from the census carried out in 1991. After that, the population structure was as follows:

Due to the effects of the Bosnian War, the situation has shifted as follows: 86% of the inhabitants of the municipality identified themselves as Croatians , 12.3% as Bosniaks and 1% as Serbs at the 2013 census .

The economic strength of the Livno region is very fragile. There is almost no added value in the city. The fastest growing branch of the economy is seasonal gastronomy, mainly in the form of street cafes. With a population of around 33,000, there are over 180 registered street cafes and numerous discos in Livno. However, it is estimated that the population almost doubles during the summer months. This has to do with the fact that many Livno residents have gone abroad, for economic and political reasons, to work and live there.

There are a number of factories in Livno that were not damaged during the war. However, the machines are out of date and there has been a lack of investors for comprehensive modernization.

Statistical data for the municipality of Livno (as of 2003)

Church of the Conception of Mary in Vidoši

Church in the Podhum parish

The monastery church of Gorica in Livno was built in three stages (1854–1875, 1876–1891, 1892–1906). The first plan comes from Franjo Moise, a well-known architect from Split at the time . Later, in the third stage, this plan was significantly changed by the Croatian architect Josip Vancaš.

The church is a three-aisled basilica with a narthex and a spacious presbytery . The main nave is divided into three bays by large pillars, which are connected at the top with round arches and delimit the barrel vaults. Thanks to the warm colors of its surfaces, the room appears as a strong, compact unit.

It is estimated that the construction of the church cost more than 300,000 crowns. The Franciscans (OFM) of Livno and the surrounding area, together with their parish, paid for this sum, which was large for the time, almost alone. 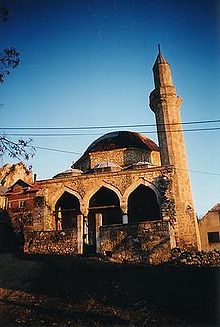 At the end of the 20th century, Livno still had five of these mosques from the Ottoman period, despite some war damage during World War II . These are: Sinan-Caus-Mosque (or Džumanusa), Balaguša-Mosque , Hadži-Ahmet-Dukatar-Mosque, Mustafa-paša-Mosque or Lala-Paša-Mosque. The mosques are characterized by domed structures and floral-fresco art inside.

The 9.25 m high monument was built to commemorate the coronation of the first Croatian King Tomislav 1,000 years earlier and was unveiled on September 5, 1926. The monument has become a symbol of the city of Livno.

Livanjski sir is a cheese from Livno and the most famous regional specialty. It is made from a mixture of cow and sheep milk and is sold at farmers' markets in the area and abroad. The production of cheese from Livno began as early as 1885. The production in the Livno dairy ( Mljekara Livno ) amounts to over 500 tons per year (as of 2002). Over 10 million liters of milk from around 1,000 suppliers are processed there. Livno cheese matures for 60 to 66 days.