Brčko ([ ˈbr̩tʃkɔː ], Serbian - Cyrillic Брчко , German outdated Bertschko or Bartschka ) is a city in the north of Bosnia and Herzegovina . It lies at the confluence of the Brka in the Save and has about 44,000 inhabitants. Since it was in the course of the Bosnian War in the 1990s in a narrow corridor that represented the only connection between the west of the Republika Srpska and its east, it was very competitive. Today, for this reason, the municipality of Brčko does not belong exclusively to either of the two entities in the country, but instead forms the Brčko District Special Administrative Region, which is administered by both entities in a condominium . 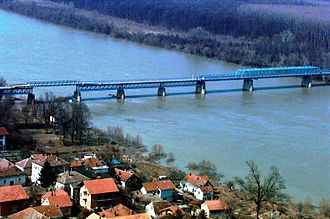 Bridge over the Save

Most of the Croatians and Bosniaks were driven out of the city through so-called ethnic cleansing . However, the number of returnees is comparatively high.