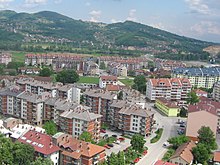 Doboj ( Serbian - Cyrillic Добој ) is a city and the associated municipality in northeastern Bosnia and Herzegovina . It is located in the Republika Srpska (RS) entity . 35,000 people live in the city proper and 77,223 people in the entire area of ​​the municipality.

The town of Doboj, 146 m above sea level, is located in the central north of Bosnia, on the Bosna River . In Doboj the Usora and Spreča flow into the Bosna. The city is also close to Mount Ozren and the two lakes Orlovo and Goransko.

Doboj has been populated mostly by Serbs since the Bosnian War. However, a certain number of Bosniaks and Croats also live in the city, whose return was facilitated by the border location with the Federation .

The city of Doboj includes the following districts:

In addition, the villages of Doboj belonged to:

The Romans built a fort near today's city in the 1st century. Parts of the Roman structure were used to build the fortress in the 13th century, around which an urban settlement developed in the subsequent period.

Since the beginning of the war in 1992, the city has been mostly inhabited by Orthodox Serbs due to the flight and displacement of the population at the time. From 2000 onwards, many members of the other ethnic groups returned to their homes.

A large swimming pool has been built near the bus station, where concerts are occasionally held. A few meters from the swimming pool are the Sloga Doboj football fields. The club currently plays in the Bosnian second division.

In autumn 2005 the modern shopping center BmD Centar was opened in Doboj , but this was closed due to lack of money. Not far from the shopping center, a new Orthodox church was built, which is larger than the previous one in the old town. In the center of the city, an old department store was restructured into another shopping center. In addition, further residential and commercial properties are being built.

Due to the geographical location on the front line, large parts of Doboj were fought over during the war, which is why the area is still heavily mined.

The field office of the European Police Mission ( EUPM ) is now closed; the area is looked after by Banja Luka . The EU is militarily represented by a camp of the Portuguese armed forces (Camp Doboj). The Polish military withdrew in September 2005 and handed over their camp to the Bosnian armed forces .

In spring 2014, Doboj was one of the towns in Bosnia that was hardest hit by the floods caused by the Yvette in the Balkans . Due to continuous rain for days, the water level of the Bosna rose continuously. On May 14, the river finally overflowed its banks and poured into the city. About 80% of the city area was flooded. All access roads were impassable and Doboj was practically cut off from the rest of the country. The highest water level in the city was about 4 meters on May 15th. Thousands of people were locked in their houses and apartments without electricity, running water or landlines; sometimes with little or no food supplies, as there was no severe weather warning from the authorities. Volunteers and local authorities provided the trapped people with water and food in rubber boats. Two helicopters were used to evacuate people who were in immediate mortal danger.

From May 16, the water level in the city slowly sank again. It was the worst storm in 120 years in the entire Balkans .

It was not until many years after the war that Doboj began serious economic development. Only 34.5% of the working population are currently in official employment. The problem of unemployment is even more pronounced in rural areas. The old agricultural cooperatives have collapsed. Not even 250 farmers in Doboj municipality own more than 5 hectares of land.

Only three companies managed to increase the number of employees after privatization. This is RKTK Doboj, a limestone mine and lime factory in Sevarlije; TKS Dalekovod, a manufacturer of overhead power lines, steel masts and related metal structures in the north of Doboj; and the Stanari brown coal mine to the west. In all three cases it is foreign direct investment.

The Rudnik coal mine is operated in the small village of Stanari near Doboj . It is owned by the UK mutual fund company EFT. The purchase of the coal mine by the English company saved many jobs.

Doboj train station at the beginning of the 20th century.

The infrastructure of Opština Doboj is outdated overall, but good in a national comparison.

Benefiting from its location, the city has developed into an important transport hub. This is where the country's two main railway lines intersect. The Pan-European Transport Corridor No. Vc runs in the valley of the Bosna , where the A1 motorway will run alongside the railway .

In 1879, with the opening of the Bosnabahn, the city was connected to the railway network. The Doboj – Tuzla railway , which was also narrow-gauge at the time, followed in 1891 . In 1947 the Yugoslav State Railways converted the Sarajevo – Doboj section of the Bosna Railway to standard gauge, extended the line to Bosanski Šamac and ceased operations on the remaining section of the Bosna Railway. From 1947 to 1951 the line to Tuzla was re-gauged and in 1951 the standard gauge line to Banja Luka was built. After the division of Bosnia-Herzegovina into two entities, the three lines starting from Doboj came to the Željeznice Republike Srpske (ŽRS) railway company , which is also based in Doboj.

The city's most famous football club is FK Sloga Doboj .

Above Doboj is the Doboj fortress from the 13th century with a view of the city and the Bosna valley. Two mosques were rebuilt in the urban area, as well as the small Roman Catholic church. The Serbian Orthodox Church not far from the fortress survived the war unscathed and a second is in the center. You can also visit a Roman camp / castell near Doboj.