This article covers the city of Mostar. There is also the writer Herrmann Mostar (1901–1973).

Mostar is located in the south of the country on the Neretva in a basin between the mountain massifs Velež (1968 m) and Čabulja (1776 m) at an altitude of only 60 m above sea level.

The basin location of the city means that there are high temperatures in summer (July / August). The climate in Mostar is Mediterranean and subtropical . The annual average temperature is 14.6 ° C; the average annual rainfall is 1515 mm. This makes Mostar the city in Bosnia and Herzegovina with the highest temperatures and the most rainfall.

With a sunshine duration from an average of 2,291 hours per year Mostar is the sunniest place in Bosnia and Herzegovina. Mostar is one of the hottest cities in Europe. In the summer months, temperatures often rise to over 40 ° C.

Essentially, this corresponds to the area of ​​the 1991 existing municipality of Mostar; However, after the Dayton Agreement, small parts were given to the newly founded municipality of Istočni Mostar (East Mostar) or acquired by the municipality of Nevesinje .

The area around Mostar has been inhabited since prehistoric times. At Cim and Sutina the remains of late antique basilicas were excavated, which suggests continuous settlement. In the late Middle Ages, the Neretva Valley was under the rule of the Kosača family. In 1454 there was a fortified crossing over the Neretva. This was conquered by the Ottomans in 1466, who expanded the place into an administrative seat, which was first mentioned in 1474 under the name Mostar (= bridge guard). In the 16th and 17th centuries, Mostar became the commercial and economic center of Herzegovina; At times it was also the seat of political power. In 1566 the now famous stone bridge was built in place of the old wooden bridge , and in 1557 the Karađozbeg Mosque . After the Great Turkish War and the Peace of Karlowitz , the city received new fortifications. In 1833 the existing sanjak was upgraded to the Paschalik Herzegovina under the vizier Ali-paša Rizvanbegović , but after his death reunited with Bosnia. 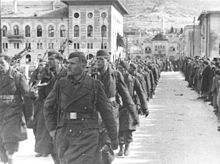 Like all of Bosnia and Herzegovina, Mostar came under Austro-Hungarian administration in 1878 . In 1881 the city became the seat of a Catholic bishop. Mostar received a railway connection and three more bridges were built over the Neretva. After the First World War , Mostar belonged to Yugoslavia, initially to Mostarska oblast , from 1929 to 1939 to Primorska banovina , from 1939 to 1941 to the autonomous Banovina Hrvatska . During the Second World War , Mostar was annexed to the Independent State of Croatia . On February 14, 1945 it was captured by partisans of the Yugoslav People's Liberation Army . After the war the city became part of the republic of Bosnia and Herzegovina in the restored, now socialist Yugoslavia. The university was opened in 1977.

During the Bosnian War there was fighting between Croatian-Bosniak and Serbian units in Mostar in 1992/1993, and between Croatians and Bosniaks in 1993/1994 . The city was divided into a Croatian-western and a Bosniak-eastern part through evictions. During the war, Croatian armed forces destroyed Mostar's landmark, the Stari most bridge , in several hours of targeted fire. In May 2013, the International Criminal Tribunal for the Former Yugoslavia sentenced six persons responsible in the Croatian Republic of Herceg-Bosna to several years' imprisonment, among other things for the destruction of the bridge. In November 2017, all judgments were upheld on appeal , Slobodan Praljak committed suicide in the courtroom . After the war the bridge was rebuilt and officially opened in 2004.

Administratively, Mostar has formed two cities since the war: a Croatian on the western bank of the Neretva River and a Bosniak on the eastern bank. On behalf of the EU, Hans Koschnick was sent to Mostar as a mediator. In January 2004 this condition was formally lifted and a new regulation was introduced, according to which the city is divided into six municipalities, which together represent one unit. As a result of the ongoing dispute over the administrative structure, there have been no municipal elections in Mostar since 2008.

In the course of the refugee crisis in Europe , temporary refugee accommodation was created near Mostar in 2018 , which migrants use as a temporary residence before crossing the border into the European Union .

The Bosnian war led to a segregation of the population. According to OHR and UNHCR data from February 1999, 47,587 of the 47,838 Croatian inhabitants lived west and 49,023 of the 49,623 Bosniak inhabitants lived east of the Neretva River. Of the Serbian population, 1,083 lived in the western and 439 in the eastern part.

The first railway line through Mostar was the narrow - gauge Narenta Railway ( 760 mm gauge ) from Metković to Sarajevo , built by Austria-Hungary . It was shut down with the opening of the new standard gauge line Sarajevo – Ploče in November 1966. This is currently used by two pairs of passenger trains a day between Sarajevo and Ploče or Čapljina. Mostar train station is to the east of the city.

Mostar is connected to the trunk road network with the M-17 main road. With Mostar Airport , the city also has an international airport, about six kilometers south of the city center.

Mostar has traditionally been an administrative and service center. After the Second World War, various industrial companies emerged that have since been privatized. Tourism has increased again in recent years.

Mostar has a good climate for fruit and wine growing, in which the Hepok company plays an essential role.

The former state-owned postal, telecommunications and energy supply companies were split up in the course of the Bosnian War. According to the population and area share at the time, HP Mostar , HT Eronet and EPHZHB are each the third largest company in the country, but now also outside of the traditional one, i.e. H. Croatian controlled area active.

Since 1997 there has been an annual fair in Mostar.

There are two hospitals: Mostar University Hospital on the western side and the Regional Medical Center “Dr. Safet Mujić ” on the eastern side of the city.

City cleaning and waste disposal have been carried out by the Komunalno company since 2012 , which combines the former Parkovi (west side) and Komos (east side) companies.

The government of the Herzegovina-Neretva canton and 5 of the federation's 16 ministries are based in Mostar.

Mostar's landmark is the Stari most (German Old Bridge ) over the Neretva, which was built from 1556 to 1566 by the Ottoman architect Mimar Hajrudin. The city name comes from the bridge guards (Bosnian, Serbian, Croatian: Mostar = bridge guard) . The "Old Bridge" was destroyed in the Bosnian War on November 9, 1993 by massive shelling from the Croatian side. The reconstruction work began in 1996 and was completed in 2004. The bridge and the old town were in the on 15 July 2005 World Heritage list of UNESCO included.

Near the bridge is the Karađozbeg Mosque , which is also open to visitors. The mosque with medresa (Koran school) and Šadrvan (fountain) was built in 1557 and badly damaged in the war in Herzegovina, but has since been restored.

Also worth seeing is a Christian basilica in the suburb of Cim, which was probably built in the 5th or 6th century. The Serbian Orthodox Cathedral of the Holy Trinity , built between 1863 and 1873, was destroyed in 1992. It has been rebuilt since 2010.

On November 26, 2005, a statue of Bruce Lee was unveiled in Mostar on his 65th birthday . It was built on the initiative of the Mostar youth group “Urban Movement Mostar” with financial support from the German Federal Cultural Foundation . According to the movement spokesman Nino Raspudić, the choice fell on the deceased Kung Fu legend because everyone could identify with him. The statue is intended to set an example against the ethnic division in the Balkans.

Significant cultural institutions in Mostar are:

The daily Dnevni list has been published in Mostar since 2001 . There are various radio and television stations.

The Mostar Peace Prize has been awarded annually since 2004 by the NGO Center for Peace and Multiethnic Cooperation, which was founded in 1990 with the aim of understanding between the ethnic groups living in Mostar . It is 30 cm high and is made of gold, silver and stainless steel.

The most popular sport in Mostar is soccer . The most famous football club is FK Velež , whose supporters are mostly Bosniaks . In 1992 the Croatian dominated football club HŠK Zrinjski was re-established. A rivalry exists between the fans of these two teams. The meeting of these two teams is also known as the Mostar Derby . Velež was a two-time cup winner of Yugoslavia (1981 and 1986). Zrinjski became the champion of Bosnia and Herzegovina in 2005, 2009, 2014 and 2016. In Mostar there have been repeated riots between Bosnians of Muslim and Croatian origin in the past. At the European Football Championship in 2008 , when Croatia played against Turkey, the riots caused a particular stir.

The most famous extreme sports are the artificial jumps from the Stari most bridge into the Neretva. These take place annually at the end of July under the name Ikari and attract numerous participants and visitors from neighboring countries.

The coat of arms was adopted on October 27, 2006. It stylizes the Stari most ("Old Bridge") over the Neretva. The six white stripes represent the six municipalities, the two triangles symbolize Libra, the semicircle the sun. The color blue symbolizes the sky and white the rock.

Large cities in Bosnia and Herzegovina