The title of this article is ambiguous. Further meanings are listed under Amman (disambiguation) . 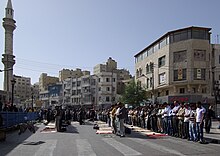 Friday prayer in front of the al-Husseini mosque 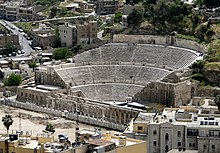 Temple of Hercules on the Citadel Hill

Amman [( aˈmaːn ], Arabic عمان, DMG ʿAmmān ) is the capital of the Hashimite Kingdom of Jordan and has 1,812,059 inhabitants (4,044,000 in the metropolitan area) (2015 census). It is a modern city where Muslims and Christians (10%) live together. Today's financial metropolis only began to grow into a large city after the establishment of the state of Israel as a result of the influx of refugees from the West Bank .

In the name of the city, the memory of the Ammonite tribe and their state of Ammon , mentioned in the Old Testament , lives on.

The known origins go back to biblical times. Here the city is known as the Biblical Rabba. The Ammonites called them Rabbat-Ammon themselves . At that time, like Rome, it stretched over seven hills. Today the city extends over nineteen hills.

After the conquest by Alexander the Great , the city came under Ptolemaic rule; King Ptolemy II Philadelphus gave it the new name Philadelphia , and that name lasted for about 900 years. From 218 BC It belonged to the Seleucid Empire; after the campaign of Pompey it became the southernmost member of the Decapolis .

The real heyday began after the incorporation into the province of Arabia Petraea under Emperor Trajan . It was during this period that most of the vast ruins on the Citadel , Forum and Theater of Amman , one of the best-preserved buildings of antiquity that are still in use today. At the time of Emperor Marcus Aurelius , a monumental Temple of Hercules was built on the middle terrace of the citadel, which replaced a Hellenistic predecessor; In the Christian-Late Antique period, a three-aisled church was built, for which the Temple of Hercules had to serve as a quarry.

In 635 the Arabs conquered the city; the qasr, part of an Omayyad palace , was built on the upper terrace of the citadel a little later ; it still crowns the citadel today. With the transfer of the caliphate from Damascus to Baghdad in 750 , the city began to decline, which was largely ruined in the Middle Ages . In the early 20th century, Amman was a village with about 2000 inhabitants.

In 1921 Abdallah ibn Husain I chose Amman as the seat of government of the newly created emirate of Transjordan , from which the Kingdom of Jordan later emerged. At that time the town was mostly inhabited by Circassians and had a population of around 5,000. By the end of the 1920s this had doubled to around 10,000.

Amman remained a small city until it began to grow very rapidly in 1948 with the influx of Palestinian refugees.

Beirut's decline in the 1970s and 1980s made Amman the leading trading metropolis in the Middle East . The settlement in the valley of Wadi Amman has since developed into a city of millions. It spreads further and further along its arterial roads into the surrounding hill country: Villages such as el-Quweisme or Khirbet es-Suk, which were still independent in the 1980s, are now actually included in the urban area.

Significant historical and cultural sites are the impressively well-preserved Roman theater and the citadel hill in the city center.

The Jordan Antiquities Museum holds important, world-class archaeological finds from the Middle East . Outstanding are those with gypsum plastic over-molded head of the excavation in Tell es-Sultan , in today's Jericho from the preceramic Neolithikum (7220 v. Chr. To 5850 v. Chr.). Iron Age II includes two statues found in Amman: the Standing Ammonite and the statue of Jerach Azar. The museum also houses the finds made by Roland de Vaux's team in Qumran , for example the copper scroll .

In the heart of the old town is the souq ( Arabic السوق), a traditional Arabic bazaar . Dense car traffic pushes past modern limestone and concrete buildings, western clothing dominates the streets, and all kinds of European consumer goods are available in the shops in the city center and in Jebel Amman.

The most famous mosques are the Abu Darwish Mosque , the King Abdullah Mosque and the Al Husseini Mosque .

The Royal Automobile Museum contains a collection of historic vehicles from the royal family.

The Jordan National Gallery of Fine Arts is a contemporary art museum.

For 2017, ISESCO has named Amman together with the city of Sannar in Sudan as the capital of Islamic culture in the Arab region.

Amman has two airports. The older airport Marka International was initially only used regionally, now only for military purposes, after the international airport "Queen Alia International" was opened in 1983 .

In a ranking of cities according to their quality of life, Amman ranked 119th out of 231 cities worldwide in 2018.

Sister cities of Amman are: