This article covers the capital of Tunisia; for further meanings see Tunis (disambiguation) .

Tunis ( Arabic تونس, DMG Tūnis , Zentralatlas-Tamazight ⵜⵓⵏⵙ Tunes ) is the capital of Tunisia and provincial capital of the governorate of the same name . It is the largest city in Tunisia and, according to the census, had 1,056,247 inhabitants in 2014. Around two million people live in the agglomeration (June 2014). Its historical core, the Médina , is on the UNESCO World Heritage list.

After being a humble village in the shadow of Carthage , Kairouan and then Mahdia , the city ​​was named as the capital on September 20, 1159 (5th Ramadan 554 of the Muslim calendar ) under the Almohad government . Their status was subsequently confirmed by the Hafsids in 1228 and after the country gained independence from France on March 20, 1956.

Tunis is the economic and commercial capital of Tunisia. Its dense road and motorway network and its relatively advanced flight connections make it a point of convergence for national traffic. This situation is the result of a long centralized policy which has helped to keep all the major institutions in Tunis.

In the course of the 20th century, the agglomeration expanded beyond the municipality's borders . Currently, Tunis extends over four governorates , Tunis , l'Ariana , Ben Arous and La Manouba , and is called Le Grand Tunis (the great Tunis).

In 2017, Tunis was 113th in the world rankings for the most liveable cities and 1st in North Africa.

According to Paul Sebag , Tunis is the transcription of a name that is pronounced tûnus , tûnas or tûnis ( û has the value of u in German) in the most common Tunisian dialects. The three terms were already mentioned by the Syrian geographer Yāqūt ar-Rūmī in his work Mu'jam al-Bûldan (Dictionary of Countries). The third prevails, also with the resident designation tûnisi or tûnusi (Tuniser).

Taking into account all the vowel variations, the name of Tunis probably has the meaning of bivouac or night camp . The French term Tunisie was also derived from the name of Tunis . This name was created by French historians and geographers and has established itself in almost all European languages. The term Tunes (in Tunisian as well as in Arabic ) describes both the city and the country. Whether people are talking about Tunis or Tunisia depends on the context.

Satellite image of Tunis and the surrounding area

Tunis is located in the north of the country not far from the Mediterranean . The Lake of Tunis , a shallow lagoon, lies between the city and the Gulf of Tunis . Time: GMT + 1h.

The city center of Tunis with the historic old town ( medina ) and the new town laid out during the colonial era is located between Lake Tunis and Lake Sebkhet Sedjoumi ( Arabic سبخة سيجومي).

The inner suburbs lie around the city center: in the west the villa and government district Le Bardo with the museum of the same name, in the north the district around the Belvédère hills and the newer settlements of El Menzah and Ariana , in the south the industrial districts Megrine and Ben Arous .

During the colonial period, the French built a 10 km long expressway and light rail embankment across the Lake of Tunis, which, as a continuation of Avenue Habib Bourguiba, connects downtown Tunis with the port city of La Goulette (Halk al-Wadi). To the north of La Goulette, the affluent suburbs of Qartāj (Carthage, Karthago ) with the international airport Tunis , Sidi Bou Saïd , La Marsa and Gammarth line the coast, and to the southeast lies the seaside resort of Hammam-Lif .

Tunis is located in the subtropical climate zone and within the winter-humid-summer-dry Mediterranean climate in northern Tunisia. The annual mean temperature is 17.7 ° C, the total annual rainfall is 465 mm. The majority of this precipitation falls in the winter half-year, in summer there is an arid climate . The hottest and driest months are July and August with monthly average temperatures around 26 ° C. In January and February the monthly mean is just over 10 ° C.

The main products of the industry in and around Tunis are textiles , carpets and olive oil . The Tourism is another important source of income of the city. The first Tunisian automobile brand, Wallyscar, is also based in Tunis .

Tunis is the main hub of the Tunisian state railway Société nationale des chemins de fer tunisiens and is served in long-distance, local and suburban traffic. The Société des transports de Tunis operates the Tunis light rail and the 5,836-kilometer urban bus network. Not far from the center, Tunis also has an international airport with the Aéroport International de Tunis-Carthage as well as extensive port facilities with ferry connections to France ( Marseille , Toulon ) and Italy (including Genoa , Palermo , Salerno ).

Tunis is one of the oldest cities on the Mediterranean. The Numidian city ​​of Tunes already existed before the arrival of the first Phoenician colonists in the 9th century BC. However, in ancient times Tunis was always in the shadow of the mighty Carthage . 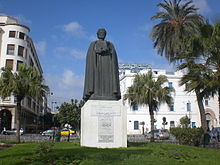 It was only after the Arab conquest and the destruction of Carthage at the end of the 7th century that Tunis became of supraregional importance. Under the rule of the Aghlabids , Tunis served briefly as a residence in the 9th century. At this time, the medina with the Ez-Zitouna mosque was built .

Tunis became the capital of Ifrīqiyas in 1159 under the Almohad dynasty and was a leading center of trade with Europe . In 1270 an attempt at conquest by the French King Louis IX failed . during the Seventh Crusade .

Tunis came under Ottoman rule for the first time in 1534 . A year later it was conquered by Charles V in the Tunis campaign and was then subject to the Spanish protectorate until Tunis finally fell into the hands of the Ottomans in 1574. After 1591 the Ottoman governors ( Beys ) were relatively independent and the city grew as a center of pirates and trade. From 1609 onwards, numerous refugees from Andalusia , mostly Muslims but also many Jews , settled there and contributed to the economic and cultural boom in Tunis.

In April 1655, the English admiral Robert Blake was commissioned to claim compensation from the Mediterranean states that had attacked English ships. Only the Bey of Tunis resisted, with the result that Blake's ships attacked the Bey's arsenal at Porto Farina (Ghar el Melh), destroying nine Algerian ships and two coastal batteries . It was the first time in naval warfare that coastal batteries were incapacitated without the use of landing forces.

After Otto von Bismarck had assured them sovereignty over Tunis during the Berlin Congress in 1878, the French made Tunis the seat of their protectorate administration after the annexation of Tunisia in 1881 and made numerous urban changes. A new town in European style was built between the old town and the sea and the town port was connected to the newly built port of La Goulette via a shipping canal through the lake of Tunis . During the Second World War , Tunis was held by the Axis powers from November 1942 to May 1943 and was their last base in Africa (see Afrikakorps / Erwin Rommel ).

After Tunisia gained independence in 1956, most Europeans (mainly French and Italians) who had previously made up almost a quarter of the population emigrated. At the same time, the rural exodus led to a large increase in population and the construction of numerous new building areas. Between 1979 and 1990 the Arab League had its headquarters in Tunis, as did the PLO from 1982 to 1993. In 1985, the headquarters of the PLO in the southern bathing beach Hammam Plage (also: Hammam Schatt) was bombed by the Israeli air force People perished (→  Operation Wooden Leg ). 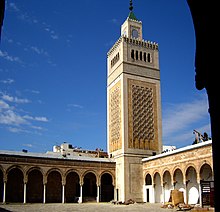 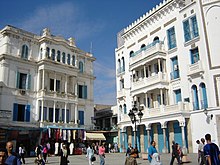 The cityscape of Tunis is characterized by the strong contrast between the oriental old town and the European-looking new town. The old town ( medina ) of Tunis was laid out in the 9th century by the Aghlabids and redesigned by the Hafsids in the 13th century . It has been a UNESCO World Heritage Site since 1979 . The medina, now inhabited by around 20,000 people, has an area of ​​1500 m × 800 m and shows the usual structure of Arab old towns with an irregular network of winding streets. In the center of the medina is the Ez-Zitouna Mosque , the most important mosque in Tunisia after the Great Mosque of Kairouan . The core of the Ez-Zitouna Mosque dates back to the 9th century, but has been rebuilt and expanded several times. The market district extends around the mosque. Traditionally, each of the souks (market lanes) is assigned to a specific economic sector, e.g. B. the perfume dealers (Souk el Attarine), shoe dealers (Souk el Blaghija) or cloth dealers (Souk des Étoffes). The central area of ​​the souks is now heavily geared towards tourism, but the market lanes on the edge of the medina are mainly frequented by local residents.

The Victory Square (Place de la Victoire) with the former city gate ( Porte de France , Arabic Bab el Bhar 'port gate') is located on the border between the old town (Medina) and the new town (Ville Nouvelle). The new town lies between the medina and the lake of Tunis and was laid out by the French in the 19th century. The streets form a regular checkerboard pattern and the architecture of the buildings also has a European feel. The main axis of the new town is the 1.5 km long avenue Habib Bourguiba , which is lined with shops, cafes and hotels.

The former villa suburb of Le Bardo is located about four kilometers west of the city center . The palace district, laid out by the Hafsids in the 15th century and expanded by the Turkish Beys , is located here. The Beys residence, built in the mid-19th century, is now home to the Tunisian parliament . In the rooms of the former Harem is Bardo National Museum housed.

→ Main article : List of sons and daughters of the city of Tunis