Thugga was an ancient city ​​in what is now Tunisia , the remains of which have now been partially uncovered and are among the best preserved in North Africa . The city experienced its heyday as part of the Roman province of Africa in the 3rd century AD. However, its history also provides information about the Numidian , Punic and Byzantine periods.

The place has been on the UNESCO World Heritage List since 1997 . The village of Dougga, which is now in the immediate vicinity, is considered to be the direct successor settlement of the ancient city.

Thugga ruins with Punic tomb on the right

Thugga is located about 100 kilometers southwest of Tunis in the north of present-day Tunisia near the city of Téboursouk . The remains of the city can be found on a plateau on the slope of a chain of hills at an altitude of 500 to 600 meters. The hilly landscape of the area is characterized by meadows and olive groves . The comparatively pleasant climate of the region, fertile soils and abundant springs as well as the strategically favorable location on the high plateau are likely to have been decisive for the Thuggas location. In addition, limestone quarries in the immediate vicinity supplied building materials for the construction of the city.

As early as ancient times, the agriculturally favorable region, dominated by wheat and olive cultivation, was home to a cluster of towns with the importance of a trading center. Below the city of Thugga, this area was crossed by the trade route between Carthage and Theveste, today's Tebessa in Algeria . Nevertheless, the location of the city, far from the Mediterranean coast in the interior and not reached from the most important connecting roads of ancient North Africa, can be described as remote and its supraregional importance was therefore limited.

The history of Thuggas can be reconstructed well today, especially for the Roman period , but the tradition of pre- and post-Roman development is often incomplete and unsecured. The findings are based primarily on archaeological investigations , especially on epigraphic analyzes of inscriptions . The preserved and excavated finds come predominantly from the Roman heyday, when traces of older settlement were largely built over. Through a ruthless approach to the earliest archaeological investigations, which were primarily concerned with the rapid uncovering of the Roman city and ancient tablets, evidence of the earlier and more recent settlement history was irretrievably destroyed or distorted. 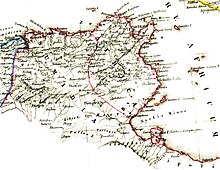 Ancient Numidia and the Carthaginian hinterland. "Thugga", not to be confused with two recorded places called Tucca , is located southwest of Carthage and northeast of the city of Sicca Veneria , today's El Kef .

So far, only a few reliable statements can be made about the founding and pre-Roman settlement of Thuggas. Only a few pre-Roman traces have been preserved between the buildings from the Roman period that are uncovered today, providing information about the early history of the city. A necropolis with dolmen tombs in the north of the city, which Thuggas was founded before the 5th century BC, is particularly important. BC, maybe in the 6th century BC Suggests. Remains of a Baal shrine under a Roman temple, presumably dedicated to the Punic deity Baal-Hammon , give an indication of an early Carthaginian settlement of the city.

Two prehistoric skeletal finds dating from around 1800–1500 BC. Could be dated, suggest that the site of the settlement was an important site long before, even if settlement at this time seems unlikely and no further traces of this early epoch have been found so far.

The mention of Thuggas in the 4th century BC is an important document of the city's pre-Roman history. In the ancient literature of the Greek historian Diodorus , who in connection with the Carthage campaign of the Greek Agathocles of Syracuse in 307 BC. A city called Tokai ( Greek  Τώκαι ) mentioned. It is very likely that the city mentioned corresponds to the ancient Thugga, which at that time belonged to Carthage's sphere of influence and is already described with a certain significance and extent. Further ancient literature references to the remote city are only sparse and should be used with great caution, as the place names are interpreted differently or can be related to other places in North Africa with similar names (for example Thucca Terebenthina or other places with the name Tucca ).

At the end of the 3rd century BC After the Second Punic War, the downfall of the Carthaginian Empire emerged, which was pushed out of the Mediterranean area by the Romans and strongly weakened and pushed back to North African territory. The East Numid ruler Massinissa , initially an ally of Carthage, took the side of Rome and founded the Kingdom of Numidia , which was able to take over the hinterland of Carthage and thus also Thugga. Under the Numidian rule of Massinissa, the city was expanded into a royal residence, and other preserved buildings date from this period. A pillar tomb from the 2nd century BC is dominant . BC, which still shapes the cityscape today and became known for a bilingual inscription, which led to the deciphering of the Numidian script in modern times . Remains of a temple were also found, which was built in 139 BC. In honor of Massinissas should have been donated.

After the Numidians were defeated during the Roman Civil Wars, Thugga became 46 BC. Finally Roman. The city was first legally dependent on the Roman colony of Carthage. During this time, Thugga had a dual constitution. While the Numidian inhabitants of Thuggas were united in a civitas , the Roman citizens formed the pagus Thuggensis . Under Septimius Severus Thugga became a municipium and erected an arch of honor for the emperor out of gratitude . In AD 261, Thugga finally became a colony. The titular diocese of Thugga of the Catholic Church goes back to a late antique diocese .

After a heyday in the 3rd century, the city began to decline steadily as early as the 4th century, which probably transferred a large part of its importance to the neighboring Thubursicum Bure (Teboursouk). From 439 to 533 Thugga belonged to the Vandal Empire and then became Byzantine . Under Justinian I a fortress was built on the forum of Thugga, which Procopius reports in his de aedificiis . In the following period Thugga completely lost its urban importance and lived on as an Arab village until the village was relocated around the middle of the 20th century to enable archaeological excavations. Today the ancient Thugga is being researched by archaeologists from the Tunisian Monuments Office in cooperation with the Universities of Bordeaux and Freiburg im Breisgau. 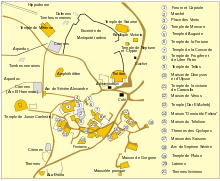 The city was built unevenly in terms of the residential areas as well as the street layout. Steep stairs and narrow alleys made them more suitable for pedestrians than for carts.

The theater was built in 168 AD and is one of the best preserved structures of its kind in North Africa. The three tiers, rising to a height of about 15 m, form a semicircle with a diameter of about 120 m. The 19 rows of seats offered space for around 3500 spectators. A gallery with a portico ( portico ) formed the upper end .

Installation of the Thugga forum

The central area of ​​the city is surrounded by several sanctuaries and squares. In the north rises the dominant building of Thugga, the Capitol . It was built between 166 and 169 AD based on the model of the Capitoline Temple in Rome as the main sanctuary for the Capitoline Triassic , formed by the deities Jupiter Optimus Maximus , Juno Regina and Minerva , and consists of a cella with a prostyle portico of the Corinthian order . In the back wall of the cella there are three niches in which the statues of the three gods with Jupiter were in the center.

Above the Arch of Alexander Severus from AD 226 to 229 are the Ain el Hammam cisterns , five vaults for around 6000 m 3 of water, which were supplied with water from a spring to the west via a 12 km long aqueduct .

Below the cisterns are the remains of the temple of Juno Caelestis , a Romanized form of the Punic goddess Tanit . The semicircular complex - built around 224 AD - is surrounded by a formerly covered colonnade, which probably served as a processional path.

The mosaic floors of two stately villas have been preserved and some of them are housed in the Bardo National Museum.

The Licinius thermal baths from the 3rd century are in particularly good condition . They were rebuilt in the 4th century and restored at the beginning of the 20th century.

While a megalithic wall , dolmen tombs and Punic grave steles , including a tower mausoleum and the pillar tomb, date from the 4th to 2nd century BC, there are other temples and early Christian churches ( Victoria Church in the north) and an early Byzantine fortress, albeit poor, receive.