This article deals with the architectural element portico. For the exhibition hall in Frankfurt am Main see Portikus (exhibition hall) .

Portico as a vestibule 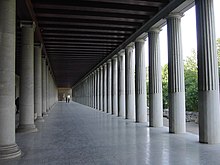 The Latin term porticus (in Latin feminine ) originally includes the meanings "walkway", "colonnade" and "hall". In the parlance of classical archeology , colonnades with horizontal beams are referred to as portico. In terms of architectural history, they represent a takeover of the Greek Stoa in Roman architecture. Porticos are mostly simple walkways of any length, the back of which leans against a building or a wall and opens on the front with a column position ( colonnade ). At the top, they usually end with a flat monopitch roof that leans against the building behind. Porticos could also have multiple aisles and multiple storeys.

A portico combined various functions: as a weather-protected walkway, it could line public spaces or streets and, depending on the depth, was also used for commercial purposes. Porticos were also an important part of the upscale villa architecture ; here they created transitions between the interior and garden areas and served as shady walkways. A courtyard completely surrounded by porticos is called a peristyle . This was also a characteristic part of the villa rustica , the so-called "portico villa", which was widespread in the provinces of Gaul and Germania .

A special form of the ancient portico is the cryptoporticus (lat. Cryptoporticus , "hidden portico"), a wholly or partially underground situated vaulted passageway.

In the architecture of the Renaissance , Baroque and Classicism , the porticos originally reserved for religious buildings are transferred to secular architecture. The term “portico” is now more narrowly defined and describes a single or multi-aisled vestibule supported by columns , and more rarely by pillars , which is in front of the main front of a building. Depending on the support system, one can specifically speak of "pillar portico" or "pillar portico". If the depth is appropriate, the term “Säulenhalle” is also used in German. Modern porticos are usually open on three sides, sometimes also two-story; they are usually closed at the top by a triangular gable . They basically refer to ancient Roman temple fronts.

An early, historically influential example of porticos of this type can be found in the so-called Villa Rotonda by the Renaissance architect Andrea Palladio , which was built at the end of the 16th century.

Among the Romanesque church buildings of Old Castile (provinces of Burgos , Soria and Segovia ), but also at many later churches in the province of Ávila (e.g. in the Valle de Amblés ), there are still numerous churches with south porches , which in Spanish usually have the term portico (sometimes also with galería porticada ) (catalog see web link). Ultimately, one can only speculate about the function of these porticos - small cloister or colonnade, court hall, weather protection, meeting place during processions, etc. Probably they were largely without function and can therefore mainly only be understood as a representative and majestic entrance area to the actual church space. A few of these porticos also enclose parts of the west side of the church buildings.

The first (preserved) free-standing temples in North India from around AD 400 (see Gupta Temple ) had a vestibule ( mandapa ) based on the Roman model supported by stone pillars . Some of these vestibules were probably made of wood, but this has not been preserved. The mandapas were integrated more and more into the temple construction over time, so that the typical image of a classical North Indian temple emerged.

The mandapas originally served primarily for weather protection (sun, monsoon ), since the devout Hindus were not allowed to enter the actual sanctum ( garbhagriha ). Only later were other functions (music and dance hall, assembly hall, etc.) added. In some early, but especially in the later temples, there is a close architectural connection between the vestibule ( mandapa ) and the corridor surrounding the sanctum ( pradakshinapatha ).