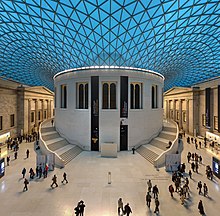 The museum came into being in 1753 when the doctor and scientist Sir Hans Sloane donated his very extensive literature and art collection to the state. Parliament decided to preserve and maintain this collection under the name of the British Museum . The museum was established in Montagu House, a mansion in the former London borough of Bloomsbury , and opened its doors on January 15, 1759. Due to the steadily growing collection and increasing number of visitors, it was decided in 1824 to move to a larger, newly constructed building. In 1850 the move was completed and the buildings were essentially what they are today. The most important impetus for the modern expansion of the collection came to the museum with the employment of Augustus Wollaston Franks , first in 1851 as assistant for the then newly created department for British and medieval history, then from 1866 to 1896 as its curator. For museum historian Marjorie Caygill, Franks was "probably the most important collector in the history of the British Museum". Over time, various parts of the collection were moved to other buildings due to lack of space.

The classicist museum building, completed in 1848, has a square floor plan with 3 floors and was designed by Robert Smirke . The round reading room with a dome 42.5 meters in diameter, designed by Sidney Smirke, Robert Smirke's younger brother, was opened in the center of the courtyard for the museum's large book collection. Book stores were built around this in the courtyard.

After the books were moved to the new British Library building in London's St. Pancras district in 1997 , the courtyard was vacated again and redesigned according to a plan by the architect Sir Norman Foster . The roof of the inner courtyard is a steel-and-glass construction, which consists of 1656 pairs of glass plates and was completed in 2000 by the Austrian steel construction company Waagner-Biro . With 7,100 square meters of courtyard area, the inner courtyard is the largest covered public space in Europe. At the same time, the reading room was renovated and returned to its original state. In 2000 the redesigned courtyard was opened, the reading room with a collection of 25,000 books, which thematically related to the museum's holdings. In 2007 the reading room was emptied and used as an exhibition room until 2013. It has been closed since the end of 2013 and future use is open.

Panorama of the reading room, status 2006

The museum now houses around eight million objects that document the entire cultural history of mankind from its beginning to the present day. It is famous for its collection of Egyptian mummies , the Rosetta Stone and the Elgin Marbles . Some exhibits can also be touched, but only at certain exhibition times. As in every museum, most of the collection is not in the exhibition rooms, but is kept in magazines under the museum. The phonogram collection, which was built up from 1905, is now part of the British Library Sound Archive . The museum's specialist libraries currently contain around 350,000 volumes. The museum's collections span a period of two million years and are divided into around 94 individual collections.

Departments in the British Museum

Caryatid from the Erechtheion on the Acropolis in Athens

Famous works in the British Museum

→ Main article : List of directors of the British Museum

With the exception of a few months in 1972, entry was and is always free.

The museum, located on Great Russell Street, can be reached using the London Underground from Holborn (Central, Piccadilly Line) or Russell Square (Piccadilly Line) stations. The British Museum has been closed since 1933.