A caryatid ( Greek καρυάτιδα "woman from Karyai " [near Sparta ]) is a sculpture of a female figure with a supporting function in architecture . An alternative name is Kanephore (Greek for basket bearer). In architecture, caryatids replace columns or pillars in portals and in the facade structure . They have ornamental gables , architraves , roofs or other roof elements.

Caryatids are a special case of the Koren .

Vitruvius referred the term "caryatid" to the ancient city of Karyai in Laconia . Their wives had been enslaved and forced to carry loads.

Caryatids and Atlases in a Handbook of 19th Century Ornamentation 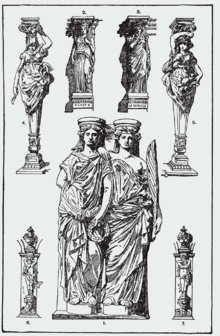 Caryatids in a handbook of 19th century ornamentation

Equating the Ionic column with the slender stature of a woman was a common concept in ancient Greece . Doric columns have been identified with the man's powerful figure; such male sculptures are known as atlases or kouroi .

In contrast to the atlases, which hold their hands up next to the head for support, the caryatid carries the load freely on the head. There are also free-standing sculptures called Koren.

The classic form of the kore represents a clothed girl who usually stands with her legs closed (or with her left foot slightly forward) with a straight posture. The arms often hang down on the side of their body or one arm is bent and carries a Christmas present . Usually they wear a peplos or a chiton . The vertical folds of the robe above the supporting leg are reminiscent of the fluting of the columns. These strict folds are often loosened up by slightly bending the free leg . In antiquity, these figures were mostly painted, although the coloring has not been preserved.

The caryatids of the Erechtheion on the Acropolis in Athens belong to the rich style . These in turn were a motif in almost all later art eras up to the end of the 19th century. These imitations often bear the hallmark of mannerism .

Another example shows that in the type of an antic temple around 525 BC. The Siphnians built the treasure house in Delphi , in which two cores in Ionic costume with thin, fine chiton and diagonally cut cloaks act as caryatids and carry the architrave of the treasure house on the front of the building, which is open to the front . A reconstruction of the building in plaster can be seen in the Archaeological Museum in Delphi.

Caryatids at the Neue Galerie in Kassel. Note how these sculptures are set apart from the rest of the building

Caryatids were used again as elements of design in European architecture in the Baroque and Classicism periods , e.g. B. in Sanssouci Palace , but also later as part of historical architecture and apartment design.

In the arts and crafts sector, caryatids can be found in seating (e.g. " caryatid stools " in African art ), tables, lights or wall coverings .