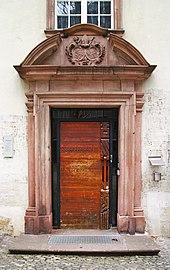 As a portal by is architectural highlighted outline or plastic jewelry entrance of temples , churches , palaces , town houses , tunnels , town halls and other structures designated.

The ancient Greek and Roman temples mostly have simple right-angled portals with a columned portico in front of them. The Roman triumphal arches with their round-arched passageways flanked by columns show a more elaborate formal language, which the portal architecture of later times often used. In the Middle Ages, the arched portal prevailed as the church entrance, which in the Romanesque period developed into a stepped portal accompanied by columns on both sides . The first sculpture portals were built during this time. The tympanum (arched field above the horizontal upper lintel ) provided space for figurative representations. The heyday of the figure portal is the Gothic . Renaissance and Baroque again emphasized the architectural character of the portal by framing columns. The portal is now also upgraded to a representative entrance in the secular architecture of the castles, palaces and town houses. The structure of the facade and the staircases lead to the portal. A portico is often built in front of the portal. Compared to the splendor of the portals of public buildings (theaters, museums, town halls, etc.) of the 19th century, modern architecture is returning to a predominantly functional entrance design, so that the portal as an independent structural element sometimes disappears completely. The postmodern architecture reintroduces the staging of the entrance and exit using conspicuous building elements and in part draws on historical models.

Style types of the portals

Purely architectural designs such as the stepped portal were enriched by sculptural parts from the time in France around 1100, so that the large figure portals of Moissac , Autun and Vézelay were created. In Italy the church portals are often covered by gable porches on columns ( Piacenza Cathedral ). 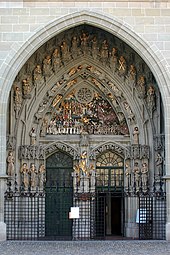 Gothic figure portal at the Bern Minster, some with original color

In the Gothic period, the pointed arch prevailed as a portal shape. A fully formed Gothic portal has door posts to the left and right of the entrance, which together with the horizontal lintel frame the door. The central pillar necessary for larger portals is referred to with the French term Trumeau . To the left and right of the door, the wall is structured by multi-tiered walls with inserted columns. These columns carry the pointed arches with their capitals and fighters , which run as archivolts (arches) over the tympanum (arched field). The pointed arch is often a gable crowned (Gable), also known as openwork tracery can be designed.

The door leaves can be made of wood or metal (bronze), but hardly any Gothic bronze doors have survived. On the church facades, like the three-aisled structure of the interior, three portals are often grouped into a three-portal system , with the side portals usually leading into the towers on a double-tower facade , the central portal on the other hand via the entrance area to the central nave. All mentioned elements of the portal can be enriched by figurative representations. The Gothic sculpture unfolds at the portal, conveying the message of the church to those entering. In addition to the main facade (usually in the west), the transept facades can also have figure portals (e.g. in Chartres ).

In the late Gothic period, numerous variants of the pointed arch portal developed according to the diverse arches ( keel arch , donkey back). The Gothic portal - like the Romanesque and all other exterior and interior architecture of this time - is to be presented in a very bright and colorful way, but the original versions are mostly only preserved in tiny remains (e.g. in Lausanne ) and are today for reasons of Monument protection no longer reconstructed on the original. 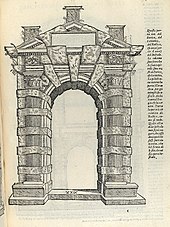 In the Italian Renaissance , the portal primarily fits into the overall concept of the facade . The independence of the portal as a sculptural element fades into the background, the architecture moves from the figurative program of the Gothic to an architectural portal as a structural element. The portal retains its splendid character, and it is even enhanced: it forms the central area of ​​the facade design. In the area of ​​tension between integration into and emergence from the facade, the Renaissance portal represents a radical change in the development of style . The framing is done by a profiled reveal, by ashlar (rustica) or, in the more elaborate examples, by pilasters or columns. The portal is closed horizontally by an architrave and is often crowned with a triangular or segmented gable, so that a portal aedikula is created. The portal design is based on the ancient column orders that are spread throughout Europe through architectural treatises by Sebastiano Serlio and Andrea Palladio . While portals of the Tuscan and Doric order tend to have a defensive character and locks are added, the ornate Corinthian column order is appropriate for churches. The elegant Ionic column order is used more often in town houses. In the German and Dutch late renaissance architecture, the richly ornamented portal developed into an important showpiece, for the decoration of which copper engraved ornamental templates were used.

In the German Renaissance, the portal is often the place for the architect's signature using a stonemason's mark.

Selection of buildings with Renaissance portals in Germany:

A dynamization of the architecture is characteristic of the baroque. Columns or pilasters placed across corners now allow the portal to protrude more strongly from the wall. The basic elements remain the same as in the Renaissance.