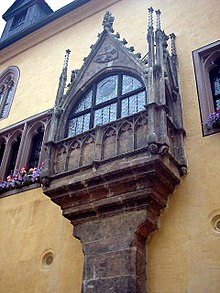 A Wimperg (also Wimperge or Wimberg ) is a gable-like crowning over portals and windows in Gothic architecture and is also called ornamental gable .

The word has been used in German since the 10th century (ahd. Wintberga , mhd. Wintberge ). The initial meaning was "what protects from the wind hides". Originally, it meant gable parts that protrude over the roof. In this context, Wintberge can also be found in older sources with the meaning " pinnacle ", occasionally also "Wimperg" as a "tooth-like top of the parapet wall of a pinnacle".

The Wimperg is considered an architectural element that, as an ornamental gable, reinforces the gothic height. It can be flanked, framed or occupied by pinnacles . The sloping gable of the eyelash was often framed or occupied with crabs . Its gable tip is often designed as a gable flower , for example in the shape of a finial . For eyelashes with a tip that overhangs to the front, the term “lady's slipper” has been handed down. The pediment can be left smooth, but it is often filled with pre-blinded or openwork tracery .

Outside of the immediate architecture, the Wimperg can also be found as a motif in Gothic carving .