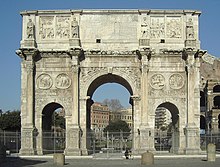 Arch of Triumph in Rome ( Arch of Constantine )

Arch of Titus depicting the triumphal procession of Titus in Rome

A triumphal arch ( fornix or arcus , from the Severans arcus triumphalis ) is a free-standing, gate-shaped structure that was originally built in Rome in honor of triumphant generals or emperors . Arches of the same shape that have not been approved by the Senate , such as foundations from cities, provincial administrations or private individuals, are usually called arches of honor . Often both terms are used synonymously, as a generally accepted, scientifically exact definition of the term triumphal arch is pending.

The construction of a triumphal arch was intended to commemorate events of great importance, which were brought about by high-ranking members of the Roman ruling class, mostly in military actions. Already at the beginning of the 2nd century BC The first triumphal arches were built by generals in Rome. During the republican times, gods whose statues were erected in a quadriga on the attic of the arch were honored by the construction of the arch, the emperor was raised above the world from the principate onwards . In the case of the triumphal arch, the arched inscription on the attic proclaimed the occasion for its construction and the merit of the honoree.

In modern times , the term triumphal arch was transferred to most arches and other monuments that were erected on the occasion of a military victory, a triumph or in memory of a peace treaty. A well-known example is the Arc de Triomphe in Paris . Triumphal gates like the Brandenburg Gate , on the other hand, form a separate, albeit related, building type. The motif of the triumphal arch has been used to design other parts of the building since post-ancient times and is called the triumphal arch scheme there .

The occasions included the restoration of the state and the expansion of the territory of the empire ( Septimius Severus Arch ), liberation of the state from high treason ( Arch of Constantine ) or the averting of external dangers ( Fornix Fabianus ). For the triumphal arches in the narrower sense, that is, the Roman arches, the Senate always acted as the client. But there were comparable buildings, called arches of honor, from the imperial era onwards in the provinces of the Roman Empire and on the rest of the Apennine peninsula itself. In these cases, the clients were officials of the provincial administration or priesthoods. At the same time, the reason for the construction changed, which in these cases was mostly of a civil nature, but could also celebrate the founding of a city itself as a result of military conflict, such as the Arch of Augustus in Aosta or an arch in Béja . Civil events are mostly dedicated to infrastructure measures: the construction of public buildings, highways, water pipes, bridges or ports.

The occasion mostly determined the architectural decoration of the arch: Tropaia , Viktorien , Genien and Eroten were just as much part of the standard equipment as fruit garlands or cornucopia . In addition, there were relief statues, reliefs and figure friezes that could create a specific reference to the occasion. 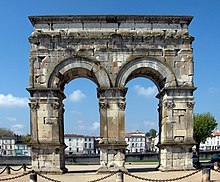 All these arches testified to the Roman power and mission consciousness, which they highlighted monumentally. Their position within the cityscape was correspondingly dominant. In Rome they lined up along the path that the triumphal procession took to the Capitol , starting from the porta triumphalis on the Field of Mars . In other cities, they initially stood over arterial roads and crossroads in the surrounding area, marked borders of the city or a territory. Later they were the starting point or destination of inner-city streets, were the entrance to forums and sanctuaries or spanned central crossroads. 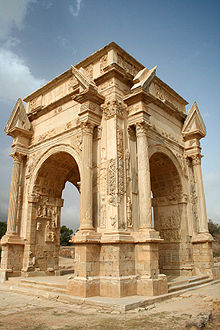 More than 360 Roman triumphal and honorary arches have been handed down through buildings, inscriptions and coins. There were over 50 of them in Rome alone. While the one-gate arch dominated in the west, the three-gate arch was preferred in the east of the empire. Two-door arches of the west are close to the classic city gates. Originally, the arches had neither columns nor entablature and the parapet was not yet a mandatory structural element. With their increasing use for propaganda purposes, the will to represent was also increased, which led to the development of rich, splendid facades . Half-columns , whole column with and without pedestals , the facades to migrating to the rafters Verkröpfungen were added to the repertoire of the arch design. In the case of three-sided arches or even the four-sided quadrifrons , which are particularly popular in North Africa , the facades were additionally enriched with aedicules . The structure behind these facades, the arched core, more or less always followed the same structure: two cubic pylons that were connected by a barrel vault .

Few remains of early triumphal arches in Rome have survived. To be mentioned here are the fornix Fabianus , the Quintus Fabius Maximus 121 BC. In addition, the Actium arches and Parthian arches for Augustus , which have only survived in the remains of foundations and fragments of the inscriptions, were built . The location of the arch for Gaius and Lucius Caesar , which must have stood north of the temple for the deified Caesar , can only be guessed . Triumphal arches still preserved in Rome are the Arch of Titus and Septimius Severus in the Roman Forum and the arch for Constantine I next to the Colosseum .

Since the triumphal marches of Roman generals or emperors were only celebrated in Rome and Constantinople , arches that were erected outside of the two capitals are not referred to as triumphal arches, but rather as arches of honor. Outside Rome, for example, are preserved: the arches of honor for Augustus in Rimini , in Susa , Aosta , Glanum and Fano ; for Trajan in Ancona and Benevento ; also an arch in Carpentras in the south of France, the Arch of Orange and the Arch of Galerius in Thessaloniki .

Also there were triumphal arches for individuals or families as the Sergijevac in Pula or Gavierbogen in Verona . Hadrian's gates in Athens and Antalya also have features of an arch of honor. The porta Esquilina , actually a city gate in Rome, was consecrated as an arch of honor for Gallienus .

A four-sided arch of honor ( tetrapylon ) is also preserved in ancient Cáparra in south-west Spain. In 1986 the remains of the northernmost Roman arch of honor to date were discovered in Mainz-Kastel .

The original meaning of the so-called Heidentor near Carnuntum is just as much a mystery to research as the function of the four-sided Roman Janus Arch .

The following important information is missing from this article or section:
Modern triumphal arches (see WP: en )
Help Wikipedia by researching and pasting it .