The Arc de Triomphe de l'Étoile ( triumphal arch of the star ) or Arc de Triomphe for short is a monument erected from 1806 to 1836 in the center of Place Charles-de-Gaulle in Paris . It is one of the landmarks of the metropolis. Under the arch is the tomb of the unknown soldier from the First World War with the Eternal Flame , which is maintained daily , in French Flamme du Souvenir(Eng. Flame of Memory) called in memory of the dead who were never identified. Wreath-laying ceremonies and honors take place throughout the year, culminating in the parade on November 11th, the anniversary of the armistice between France and Germany in 1918.

The Arc de Triomphe can only be reached by pedestrians through an underpass; the triumphal arch has a viewing platform.

The Arc de Triomphe de l'Étoile should not be confused with the lesser-known and smaller Arc de Triomphe du Carrousel , which is located between the Palais du Louvre and the Jardin des Tuileries .

The building is managed by the Center des monuments nationaux (Center for National Monuments), which is subordinate to the Ministry of Culture .

The triumphal arch served the glory of the imperial armies and is pathetically referred to by some as the "Altar of the Fatherland", because the most solemn state ceremonies in France take place here; pageants often lead down the Avenue des Champs-Élysées from here or end with the Arc de Triomphe as their destination.

It stands in the center of Place Charles de Gaulle (until 1970 Place de l'Étoile ), on the western branch of the Avenue des Champs-Élysées . It is part of the " historical axis ", a series of monuments and major streets that lead out of Paris. Twelve avenues emanate from this triumphal arch in a star shape. The current shape of the square was created in 1854, but had basically been laid out in a similar way since the late 18th century, albeit with only four streets.

When the responsible architect Jean-François Chalgrin died in January 1811 and Napoleon abdicated on April 6, 1814, the construction work was stopped. Louis XVIII had it continued in 1824 under the direction of Héricart de Thury. In 1830, King Louis-Philippe (often called the citizen king) decided to return to the Napoleonic conception. He and Adolphe Thiers decided on the figurative jewelry and its executors. The arch was completed by Huyot and Blouet in 1836. On June 25, 1836, a 26-year-old anarchist named Louis Alibaud shot the king's carriage and narrowly missed him. The king then decided not to take part in the planned grand military parade, which was to take place on July 29 to commemorate the sixth anniversary of the July Revolution of 1830 and the inauguration of the arch.

The circuit of the last kilometers of the final stage of the Tour de France , which has ended on the Avenue des Champs-Élysées since 1975 , circles the Arc de Triomphe. Until 2013 , the circuit made a turn directly in front of the Arc de Triomphe (and thus did not circling it).

On the evening of January 9, 2015, the words “ Paris est Charlie ” were projected onto the triumphal arch. The slogan, a modification of " Je suis Charlie ", was a commitment to the democratic values ​​of freedom of expression and freedom of the press and a show of solidarity with the employees of the satirical magazine Charlie Hebdo , who had been shot by Islamist assassins .

On December 1, 2018, the figure of Marianne on the triumphal arch was badly damaged when serious riots broke out during the protest actions of the yellow vests movement .

The triumphal arch is 49.54 m high, 44.82 m wide and 22 m deep. The large arch measures 29.19 m in height and 14.62 m in width, the small arch 18.68 m in height and 8.44 m in width. The design is in the style of ancient Roman architecture. The four groups of figures at the base of the arch show The Triumph of 1810 , Resistance , Peace and La Marseillaise or Exodus of the Volunteers of 1792 (by François Rude ). Above, bas-reliefs with replicas of important revolutionary and Napoleonic victories are embedded in the areas around the arch. The inner walls of the triumphal arch house a small museum. 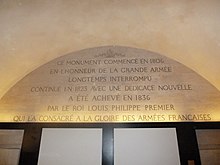 The inner walls of the triumphal arch bear the names of: 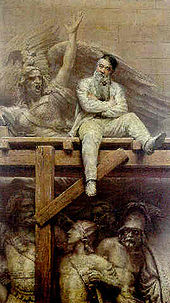 The triumphal arch is also famous for the significant reliefs it bears. They were commissioned in 1833 from the sculptors Antoine Étex , Jean-Pierre Cortot and, above all, François Rude. The east facade shows the most famous relief, the Marseillaise (excerpt of the volunteers from 1792) by François Rude (1784–1855), which is also called Le chant du départ , i.e. the farewell song . It depicts a group of outgoing warriors who, obviously revolutionary or exalted nationally - at least one can assume that in this scene - have the new revolutionary song of the Marseillaise on their lips, which was only composed on April 25, 1792.

With the heroic sweep of his portrayal, François Rude far surpasses that of his competitors on this triumphal arch. He began as an academic classicist, but with this, his most famous work, Rude was one of the first to turn away from classicism and turn to romanticism, to a new heroic passion in sculpture, similar to Delacroix in painting.

It is interesting to compare the two reliefs on this page. On the other hand, it is about the “Triumph of Napoleon after the Peace of 1810” (the “Triumph” glorifies the Peace of Vienna ) by Cortot. Cortot's relief is still entirely in the tradition of classicist statics, measured hero worship, symmetrical, well-proportioned image composition - in other words, “sublime boredom”.

This atmosphere can also be clearly felt in the reliefs by Antoine Etex on the west side, for example in “Peace”. Here one still has the impression that the themes are presented by a troupe of actors on a theater stage, that motifs from the arsenal have been put together here.

There are six bas-reliefs on the four outer sides of the arch, each depicting famous battles. Among the six sculptors is Jean-Jacques Feuchère with a depiction of the passage over the bridge of Arcole .

The artist couple Christo and Jeanne-Claude intended to use the building from September 19, 2020 for 16 days until October 4, 2020 for their art action L'Arc de Triomphe, Wrapped (Project for Paris, Place de l'Étoile - Charles de Gaulle) . However, Christo died on May 31, 2020. According to his wish, the project, whose first plans were from the 1960s, was implemented posthumously by his nephew. After two months of preparatory work, the wrapping was completed on September 18 and should last until October 3, 2021. 25,000 square meters of fabric and 7,000 meters of red cord were used.