After the ceasefire agreement was signed (from right): Behind the table, the French Generals Maxime Weygand and Marshal Ferdinand Foch (standing) as well as the British Admirals Rosslyn Wemyss and George Hope; standing in front of it is the German. Head of the delegation Matthias Erzberger , Major General Detlof von Winterfeldt , Alfred von Oberndorff ( Foreign Office ); in the back the captains Jack Marriott (British), Ernst Vanselow (far left)

The first armistice of Compiègne ( French Armistice de Rethondes ) was concluded on November 11, 1918 between the German Reich and the two western powers France and Great Britain and ended the fighting in the First World War .

The contract was signed in a railway saloon car that stood in a clearing near Rethondes east of the northern French city of Compiègne .

With the failure of the spring offensives of 1918 , the German Supreme Army Command (OHL) realized that the war could no longer be won militarily. Since the summer there have even been signs of defeat. The situation on the Western Front had become more and more hopeless as a result of the increased intervention of American troops . The Allies' final offensive began on August 8, 1918 . The collapse of Bulgaria in mid-September prompted the German high command to take further steps in the face of an imminent catastrophe. The German military leadership feared the collapse of the western front and the advance of enemy troops into Reich territory.

On September 29, 1918, Erich Ludendorff, on behalf of the OHL, called on the Reich government to begin negotiations on an armistice with US President Woodrow Wilson , whose 14-point program from January 1918 had the best prospect of a mutual agreement under relatively favorable circumstances promised. For this purpose, the democratic opposition of the Social Democrats , the Center and the Progress Party was integrated into the new Reich government under Prince Max von Baden as part of the October reform . 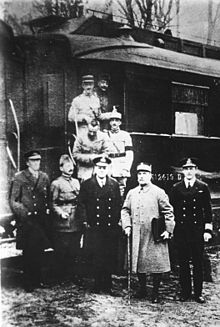 Delegation of the Entente in front of the saloon car in Compiègne. Second from right: the head of the French delegation, Marshal Foch

An appointment for a meeting was only made after a week-long exchange of notes with the American Secretary of State Robert Lansing . After a month's delay, a German delegation headed by State Secretary Matthias Erzberger received permission to travel to France. The French selected a railway wagon in a wooded area in the municipality of Compiègne near the small town of Rethondes, where the Allied High Command had been located until March 1918. Erzberger, who was called to the delegation in Berlin at noon on November 6th, was appointed head of the delegation in Spa immediately before leaving there on November 7th. In the evening the delegation crossed the front line near La Capelle ( ⊙ ) and reached the clearing of Rethondes on November 8, 1918 . The first discussions took place that day at 10 a.m. 49.9849 3.9321

The Allied Commander-in-Chief Marshal Foch, however, remained very limited in the scope of the negotiations . The German representatives were given a tight time frame of 72 hours and were only allowed to dialogue with lower-ranking officers. The French generalissimo reserved the right to humiliate the enemy by being absent.

The Germans found the terms of the armistice proposed to them to be very harsh, but the delegation of the Entente Powers did not accept any objections. Erzberger sought consultation in Berlin and was allegedly instructed by Chancellor Friedrich Ebert, after consultation with the head of the OHL, Hindenburg , to accept the armistice under any conditions. In fact, the telegram in question came from the OHL without consulting Ebert, who only subsequently agreed. Nonetheless, these events contributed to the legend of the stab in the back.

Relevant points of the contract 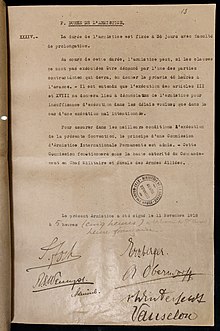 Last page of the Armistice Document 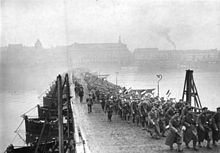 Return of German troops from the front after the armistice: Infantry crossed the Rhine in Koblenz over the ship bridge in November 1918 . (Source: Federal Archives)

These measures prevented the German Reich from continuing the war. Foch said that Germany was now "at the mercy of the victors at mercy and disgrace".

The repatriation of around 190 divisions of the German Western Army agreed in the armistice was ended by January 17, 1919.

The armistice came into effect on November 11th at 11 a.m. French time (12 p.m. German time) and was supposed to last for 36 days, but was extended on December 12, 1918. It was extended three times in total, with the first two extensions specifying both the period of "one month" and a specific expiry date: