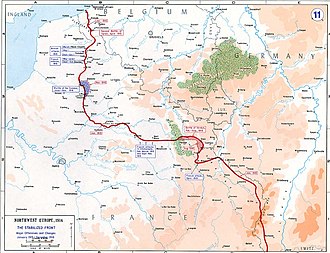 Western Front is the German name for the front of the First World War in France and Belgium , which stretches over 750 km from the English Channel to the Swiss border ; German territory was only touched for short stretches in Alsace-Lorraine . The northernmost 60 km of the front ran on Belgian territory; it was bounded in the north by the North Sea.

The Western Front emerged after the German and Allied fronts had solidified in October / November 1914 and ran on Belgian, French and German territory (in German Lorraine and Upper Alsace ). Before the final offensives of the Entente Powers in late summer and autumn 1918, the course of the war changed only insignificantly - apart from the retreat of the Germans to the Siegfried position in 1917 and the German spring offensive in 1918 . 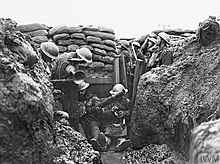 British trenches on the Western Front 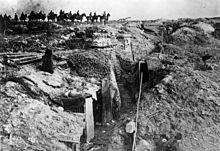 Headquarters of an infantry division when crossing a captured British position, 1918 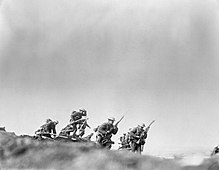 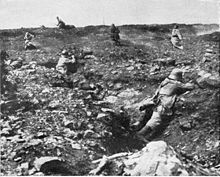 Fight in the funnel area

The war on the western front represents immeasurable suffering for soldiers on both sides. This included large-scale attacks against the infantry highly developed and machine guns defended positions , the gas war , days of shelling and artillery duel hitherto unprecedented scale, the first air combat and the mine warfare with a. Millions of soldiers were wounded or killed on this front. Bones of hundreds of thousands Fallen lie along the Western Front in hundreds of military cemeteries and ossuaries , or still undiscovered in the craters , which was created mainly by the intensive use of artillery. In the main combat areas, known as the rouge zone , there are still many remains of ammunition and poison gas in the ground. The front line of the trench war can still be seen in many places.

The southernmost section of the front froze in the autumn of 1914 for trench warfare. From the Swiss border at Bonfol , it crossed the Sundgau eastward to Thann . From there it climbed the eastern Vosges ridge to the Hartmannsweilerkopf, which was fiercely contested in 1915 . To the west of it, French troops had established themselves, who were watching the southern Vosges and the Burgundian Gate from the 1,247 meter high Alsatian Belchen . The front followed the Vosges, passed the heights at Munster and Urbeis , where the Lingekopf was fiercely contested from August to October 1915 , but was held by German troops until the end of the war. From there, the positions extended over the Bonhomme Pass and the Ste.-Marie Pass to where they crossed the German-French border and on the western side of the ridge the foothills of the central Vosges at height 607 , La Fontenelle and Chapelotte Pass happened. 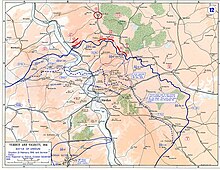 In the front area between the Côtes de Moselle and the Côtes de Meuse, the hilly plains of Lorraine between the Moselle and Meuse, the front froze as early as mid-September 1914. Here the German troops in the battle of Lunéville (near Rozelieures and Gerbéviller ) failed to push through on Épinal and fall in the rear of the French armies of the north. The French attack towards Saarburg had also failed. The lines crossed the Moselle at Pont-à-Mousson , then the front ran through the Priesterwald and then stretched in front of Flirey and Limey in an east-west direction south of the Montsec dominating the plain (French: Butte de Montsec) to Apremont there. Through the forest of Apremont and Ailly , the positions then reached Fort Camp des Romains, taken by Bavarian troops at the end of September 1914, and there formed the front arch of Saint-Mihiel , the important German forward bridgehead south of the Meuse , which protruded far to the south with the Woëvre -Level monitored. From there the front turned sharply to the north and changed back to the eastern bank of the Meuse.

To the east of the Meuse, the front line climbed the wooded heights and then reached the twin heights of Combres and Les Eparges.

It descended from the Meuse heights again in a large arc in a north-westerly direction in front of Etain and below the heights along and crossed the Meuse north of the fortress belt around Verdun.

This front arch formed the main combat area in the Battle of Verdun in 1916 . To the west, the front continued over the Dead Man with his two contested heights 265 and 295, in order to reach the Argonne , the southern foothills of the Ardennes , further west over the heights of Vauquois . In their mountains, gorges and destroyed forests, fierce fighting raged until September 1915 with mine blasting and shock troop operations, until the front also froze here from autumn 1915.

From the western edge of the Argonne near Sainte-Menehould , the front ran west over the heights and barren chalk soils of northern Champagne , past the Kanonenberg (Mont Têtu), where a large, dusty and almost treeless military training area with a wide field of fire extended. The positions ran along the war-wiped villages of Perthes, Mesnil-lès-Hurlus, Tahure and Ripont, past the Ferme Navarin, then along the massif de Moronvilliers (the best-known of the seven hills is Mont Cornillet ) in front of Reims in a quarter arc the city, also surrounded by a belt of fortifications, and past it further north. Reims, the capital of Champagne and famous for the coronation cathedral of the French kings , was near the front line during the war; it suffered severe damage, mainly from artillery shells (details here ).

The front followed the westward flowing Aisne at Berry-au-Bac , crossed height 108 and continued in a north-westerly direction to the foot of the Chemin des Dames . This dominant mountain range, held by German troops, located in the Reims - Laon - Soissons triangle , was the target of the French spring offensive in 1917, but remained in German hands. From there the front moved in a westerly direction along the ridge, descended at Vendresse into the valley of the Aisne.

The notorious “Laffaux corner” north-east of Soissons formed the corner point of the western front protruding to the southwest between its northern and southern ends. To the north the positions extended up to the Soissonnais plateau. The plateau of Nouvron was the scene of the fighting at the front for the Quennevières farm; the front ran west / north-west through wooded areas to the Oise south of Noyon , then through the mountains of Thiescourt and Dreslincourt and past the Plémont to descend into the vastness of Picardy .

Until the retreat to the Siegfriedstellung ( company Alberich ), the western front stretched in a north-westerly direction through the endless fields of the “granary” of France, past Roye to the west , where it crossed the old Roman road between Amiens and Saint-Quentin .

West of Péronne , the lines met the Somme , which from 1916 formed the dividing line between the French and British areas of operations and in 1916 was the scene of the Battle of the Somme .

North of the river the front ran north-westerly towards Albert and the heights of the Ancre . Up until the Allied offensive in 1916, the front villages of Mametz , Fricourt , Ovillers-la-Boisselle , Thiepval , Beaumont-Hamel , Beaucourt-sur-l'Ancre , Serre and Gommecourt were in the front arc of the Somme . the most westerly point on the Western Front.

We continued in a north-easterly direction into the Artois , in a wide arc around the city of Arras, which was tenaciously defended by the Allies, and further along the front in a northerly direction via Saint-Laurent-Blangy, Roclincourt, Neuville-Saint-Vaast and through the infamous labyrinth the mountain range of Vimy , occupied by German troops, including the places Souchez, Ablain-Saint-Nazaire and Carency, which were taken by the French in 1915, up to the Loretto height. Here in 1915 ( Loretto Battle May 9 to July 23, 1915) and 1917 ( Battle of Arras , April 1917) fierce battles raged for dominance over the heights and the associated kilometer-wide view of the plain of the German-occupied, strategically important des ( Northern French coalfield ) of Lens , with its coal mines, coal and slag mountains and enormously important for troop and supply transport railway line Metz - Lille . The front ran past Lens (35 kilometers south of Lille) and then swung northward past Loos, Hulluch, the infamous Hohenzollernwerk to the La Bassée Canal (French Canal d'Aire; Canal from Béthune to La Bassée ). From there, the front stretched in a north-easterly direction through French Flanders , via Givenchy , Neuve-Chapelle, Fromelles, Aubers to the Lille - Armentières road , encompassing the latter small town to the east, before reaching Belgian territory south of the Ploegsteert forest.

In Flanders , the front line ran along the “Flemish Switzerland” over the ridge of Messines to the dominant, 159 meter high and therefore fiercely contested Kemmelberg . On the Allied side, the lines were monitored from the 176 meter high Mont de Cassel , near the Mont des Cats was the British headquarters. From Wytschaete , still today surrounded by the craters of huge mine blasts, the front ran over a flat range of hills of the Wytschaete arch and encircled Ypres from the east in a wide semicircle as the Ypres arch , known by the Allies as "Salient" . Ypres remained in Allied hands, but until October 1918 it was within the observation and sphere of influence of the higher-lying German positions at Passchendaele and Gheluvelt . Names like Höhe 60 , Zillebeke, Zonnebeke, Bikschoote, Langemark and Steenstraat became the beacons of war. The first major poison gas attack of the war also took place here in 1915.

The front met the Yser north of Ypres and followed its course to Diksmuide . Belgian troops were lying here; they had blown the locks of Nieuwpoort in November 1914 to stop the German advance; since then the area north of it was under water, which prevented major operations. The front reached the North Sea at Nieuwpoort, which was occupied by French troops and the Lombardsijde held by the German Marine Corps on the German side, and thus reached its northernmost point. To the east of it, heavy, long-range German coastal batteries secured the Belgian coast and the important Zeebrugge submarine base from attacks by Allied naval forces.