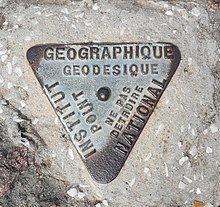 The Institut national de l'information geographique et forestière ( IGN , until 31 December 2011 Institut géographique national ) is a French government agency based in Paris, whose mandate is to ensure the creation, maintenance and dissemination of geographical information for France . The IGN is the successor to the Service Géographique de l'Armée (SGA), which was dissolved in 1940. 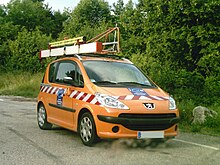 The IGN maintains a training center for geography , the ENSG ( École nationale des sciences géographiques ) in Marne-la-Vallée . Of the 14 training professions that are taught in the ENSG, three are tailored to the future IGN employees:

The ENSG is linked to four research institutes controlled by the IGN: the COGIT, which specializes in geographic information systems and cartography , the MATIS, which deals with photogrammetry , the LOEMI, in which the technical aids are developed, and the LAREG, which Geodetic laboratory on the premises of the ENSG, which oversees the International Terrestrial Reference Frame (ITRF).

Map archive in the institute

The French IGN also sells maps of foreign regions and cities under its logo.

The IGN has a large collection of old maps: from Cassini (17th and 18th centuries), general maps ( Cartes d'état-major ) from the 19th century, maps of royal hunts (17th century), etc. All of these maps that were created using the intaglio process are kept in their original leather binding.

One of the public missions of the IGN is the mapping of France on a scale of 1: 25,000. For this purpose, IGN planes photograph the country, which allows the creation of maps with the help of photogrammetry . For a long time stored in analog format, the data is now digital, which makes implementation noticeably easier. The IGN has four aircraft stationed at Creil airfield , which update aerial photographs every five years.

The Phototèque Nationale has been keeping its own aerial photographs and those of the Service Géographique de l'Armée since 1921.

The IGN provides its public and private customers with geographic databases based entirely or in part on geographic information systems. Against the background of ordinary maps, they allow the selection, addition and presentation of mappable information. The IGN creates and updates the Référentiel à grande échelle (RGE), which contains four components: topography , orthophotography , parcel and address.