Map of Versailles Palace and its park (detail)

Carte de Cassini , also Carte de France de l'Académie , is the name of the first map series that depicted France on the basis of an accurate geodetic survey. It is essentially the work of César François Cassini de Thury (Cassini III) and his son Jean Dominique Comte de Cassini (Cassini IV). The publications began in 1747 with an overview map, the creation and publication of the individual sheets continued with interruptions until 1818. It is still used today by people interested in historical maps and can be viewed online in the French geoportal . 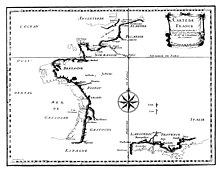 The origin of the map series can be traced back to King Louis XIV . Its minister, Jean-Baptiste Colbert , founded the Académie Royale des Sciences in December 1666 and informed its members in 1668 that he wanted more precise maps of France than the ones that had been in use up until then and that the necessary measures be prepared.

In the years 1669 and 1670, Jean Picard therefore carried out a degree measurement on the meridian of Paris using triangulation and, for the first time, with quadrants that had telescopes with crosshair eyepieces and micrometers and thus achieved a level of precision that was previously impossible. This measuring section was later referred to as the Paris – Amiens meridian arc . From this and astronomical local regulations that Picard and Philippe de La Hire conducted in the years 1679 to 1682 as well as individual from local surveys of coastline was the Carte de France corrigée par Ordre du Roy sur les observations de messieurs de l'Académie des Sciences ( map of France , corrected according to the order of the king according to the observations of the gentlemen of the Académie des Sciences ). It was presented to the Académie and the King by La Hire in 1682, who then jokingly stated that "ces Messieurs de l'Académie lui avaient enlevé une partie de ses États" ( these gentlemen of the Academy have taken away part of his state from him ).

Picard had already pointed out that the necessary accuracy required a degree measurement across France. Colbert therefore commissioned Jean-Dominique Cassini (Cassini I) to measure the southern part up to Perpignan and Philippe de la Hire , the northern part up to Dunkirk . This degree measurement was later called the Meridienne de Paris (Meridian of Paris) . However, the work was stopped as a result of Colbert's death in 1683. In 1700 Louis XIV ordered the continuation of the work, in which Cassini was now supported by his son Jacques Cassini (Cassini II), but which had to be stopped again in 1701 because the available funds were needed for the War of the Spanish Succession . After the death of Cassini I (1712) and Louis XIV (1715), the surveying was continued and completed in 1718 under the reign of the Duc d'Orléans by Jacques Cassini, Giacomo Filippo Maraldi and La Hire's son. In Cassini's description of this degree measurement published in 1720, detailed maps of the triangulation and a full Carte de France are included.

In 1733 Jacques Cassini (Cassini II) was commissioned by Philibert Orry, Ministre d'État et Contrôleur général des finances, to carry out the transverse triangulation necessary for the precise determination of the geographical longitude . He therefore measured the distance from Paris westwards to Granville and Saint-Malo , which roughly followed the great circle running perpendicular to the meridian of Paris , and in the following year the distance to Strasbourg .

During these measurements, the great physical problem of the time came up again and again, whether the earth was flattened at the poles . Therefore, the Académie sent an expedition to Peru in 1735 under Bouguer , La Condamine and Godin and in 1736 one to Lapland under Maupertuis . The reports by Maupertuis (1737) and Bouguer (1749) finally clarified the question in the sense of a flattening.

Meanwhile, the triangulations in France were continued by north-south routes from Saint-Malo to Nantes and through Lyon, as well as four west-east routes at the height of Amiens , Orléans , Lyons and Bayonne . In the years 1736 to 1740, the coasts and the national borders were also triangulated.

After the shape of the earth was finally clarified, Cassini de Thury (Cassini III) finally repeated the measurement of the meridian of Paris in 1739.

This created a precise basis of 400 triangles and 18 base lines for the subsequent cartographic works .

Nouvelle Carte ... de la France with the other triangulations, 1744

In the following years Cassini de Thury carried out various complementary triangulations. In 1744 he created the Nouvelle Carte Qui Comprend les principaux Triangles qui servent de Fondement à la Description Géométrique de la France Levée par ordre du Roy par Messrs. Maraldi et Cassini de Thury, de l'Académie Royale des Sciences ( New map, which the contains essential triangles that form the basis of the geometrical description of France, carried out according to the order of the king by Messrs Maraldi and Cassini de Thury, (members) of the Académie Royale des Sciences ), which he presented to the Académie in 1745. For the first time, it summarized all triangulations. Their scale was approximately 1: 1,799,000. Your cartridge was not dated and was later reused, creating confusion. It now contained almost 800 triangles and 19 baselines. Still, it had empty areas. Cassini de Thury did not want to fill it with other, existing map series, but preferred to limit himself to the results obtained with his own means through triangulation.

In 1747 Cassini de Thury published a map that no longer only contained the triangles, but also represented places and rivers ( Carte qui comprend tous les lieux de la France qui ont été déterminés par les opérations géométriques ( map containing all the places in France that measured with geometric means )). It consisted of 18 sheets of 141 × 126 cm; their scale was 1: 878,000.

Cassini's map from 1747 also contained the parts of Flanders that he had for Louis XV during the War of the Austrian Succession . or for his generals under the Marshal of Saxony had mapped. Louis XV was so impressed by the military value of this map and the associated detailed maps of the battlefields that he asked Cassini to create a map for France on a scale of 1 ligne = 100 toises or 1: 86,400. (1 toise = 846 lignes) commissioned. The production should take 20 years, for the Louis XV. pledged an annual budget of 40,000  livres .

After the Peace of Aachen , Cassini received the first money with which he could pay surveyors for the detailed survey of the land, draftsmen, engravers, printers, etc. Its real work began around 1750.

Six years later he presented the king in the castle of Compiègne with the first two maps, the map of Paris and the map of Beauvais to the north. The king was satisfied, but revealed to him that his contrôleur général Machault d'Arnouville would not be able to provide any more money for the tickets in the future because of the Seven Years' War . 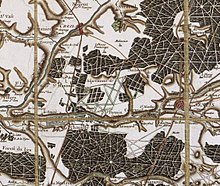 Cassini de Thury then decided - with the King's consent - to issue the cards himself. To this end, he founded a society of fifty high-ranking members, including Madame de Pompadour , who undertook to make the contributions necessary to complete the cards. Society was properly administered; the sheets could be sold more expensively than the cards common at the time. Later, in 1780, there were 203 subscribers instead of the shareholders . All map sheets were monitored by the Académie Royale. The originals were kept in the depot of the Paris observatory .

The preparation of the map sheets went on steadily. In 1783 Cassini de Thury published a comprehensive description of the work.

Cassini de Thury did not see the completion of his great work, however. When he died of smallpox in 1784 , about 150 sheets had been published. His son Jean Dominique , who had worked for ten years, continued the work.

The survey was completed in 1789. Savoy was not part of France at the time and was therefore not included, and Corsica and the Île d'Yeu were not included either. The last 75 cm × 105 cm sheets were published in 1815. The fact that it took so long was also due to the fact that the cards were confiscated at the beginning of the coalition wars for reasons of secrecy and brought from the Paris observatory to the Dépôt de la Guerre .

The map sheets were printed in black and white on copper plates . Various sheets of paper were then colored by hand and enjoyed great popularity.